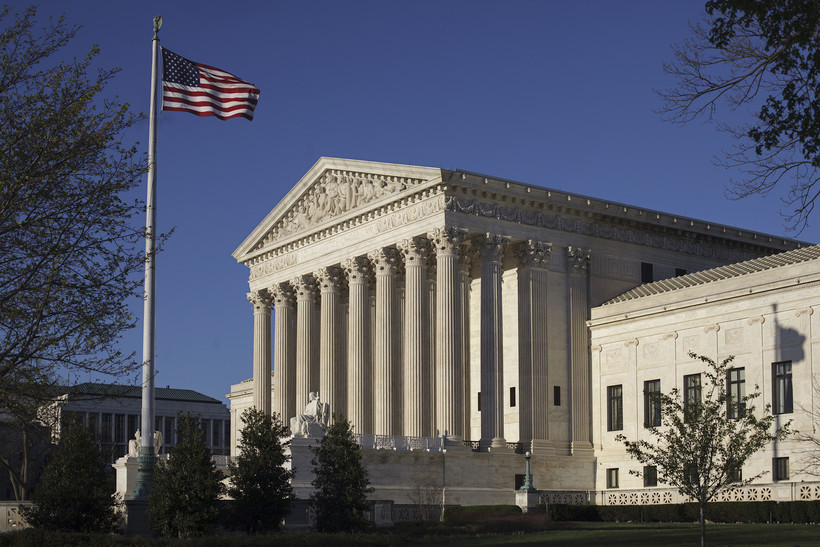 Major Decisions Remain On The US Supreme Court's Docket For June

Several high-profile cases including those that address partisan gerrymandering, a travel ban and religious rights await United States Supreme Court decisions that could come in the next month before the justices take a summer recess.

Through the end of June, justices are expected to hand down decisions on 29 more cases, said Ryan Owens, a professor of political science and affiliate law faculty at the University of Wisconsin-Madison. The next opinion day is scheduled for Monday, June 4, Owens said, and decisions will likely come every other day after that.

"It's really going to be, I think, one of the more important and critical terms that we've seen from the court in a long time," Owens said, noting that major cases tend to be released in June, despite the term beginning in October.

While justices could postpone decisions on some of these cases until next term, Owens said they're unlikely to. Still, he said there's no way to know ahead of time which opinions will be decided or when.

The latest landmark decision came last Monday when the high court ruled Congress can't prohibit states from making laws regarding sports betting. Before that, Congress told states they can't regulate sports betting, though the Legislature itself never took a stance on it, making it controversial.

"That was a problem for the court because essentially you've got the national government telling states that are sovereign entities that they cannot do something even though the federal government chose not to do it," Owens said.

The Supreme Court struck down that prohibition on a 6-3 vote, paving the way for states to legalize sports betting if they choose to.

One of the cases being carefully scrutinized is that of the Masterpiece Cakeshop v. Colorado Civil Rights Commission, in which a Colorado baker refused a gay couple's request for a wedding cake on the basis of religious beliefs.

In 22 states including Colorado, the law requires businesses that are open to the public to provide equal service to all customers. But the looming question here is whether the baker can be forced to do something creative for a purpose that he doesn't believe in.

"I think at least it's framed at the Supreme Court is whether for someone like a cake maker or someone else who uses his or her artistic abilities to create something, whether, from their perspective, they can be compelled to create something for same-sex marriage with which they disagree," Owens said.

If the decision aligns with recent court cases involving religious rights questions, Owens said a 5-4 vote in favor of the cake shop owner is likely.

He expects the court's decision will outline a "very limited exception" protecting those in artistic professions from having to comply with a message or individuals with whom they disagree.

The Carpenter v. United States case will decide whether the government requires a search warrant to get information traced through cell phones about where people have traveled.

Owens said without a search warrant, the government now can figure out where people have been by contacting their cell phone providers and asking for that information.

"The government can then use that to make a case against you," he said.

Honing in on what ramifications this decision might have for the future of technology, Owens said this decision would go a step further beyond the court's 2014 ruling that police have to get a search warrant to look through phones.

The location data, Owens pointed out, is the property of the cellular provider.

"As we have become more and more reliant on cellular information ... this issue is becoming quite a bit more important," he said.

The law allows for the practice of creating new boundaries every 10 years to ensure the population is equal within districts, Owens said.

"In the process of that, legislatures have a tendency to want to benefit people of their own party," he said. "So whoever is in the majority tends to draw the districts so that their majority kind of withstands contentious elections in the future."

Gill v. Whitford, a case brought by Wisconsin voters, asks the justices to decide whether state legislative districts were drawn to such a partisan extent that they're unconstitutional. Plaintiffs in the case are calling for the court to overturn the state's map, while another gerrymandering case before the Supreme Court from Maryland seeks a decision regarding one congressional district.

In Wisconsin, a federal court ruled in November 2016 that the map was unconstitutional. That court responded with an order for Republicans to draw new lines within a year, but the Supreme Court put a hold on that after it agreed to take on the case.

The third of President Donald Trump's travel bans, which closes off access to the U.S. from North Korea and five Muslim-majority countries, as well as government officials from Venezuela, might have more luck at the Supreme Court than it has at lower federal courts, Owens said.

Although some federal courts have ruled against the policy, some think the Supreme Court might support it. The court allowed the ban to go into effect last year, despite legal challenges in the lower courts.

"I tend to agree ... that the Supreme Court seems to be more sympathetic to this," Owens said, saying federal courts have been in an "awkward position" trying to make decisions about foreign policy when they're "not in a position to do that."

Justices are putting together their opinions now, Owens said, as oral arguments have concluded. Owens said a decision is expected within the next few weeks.