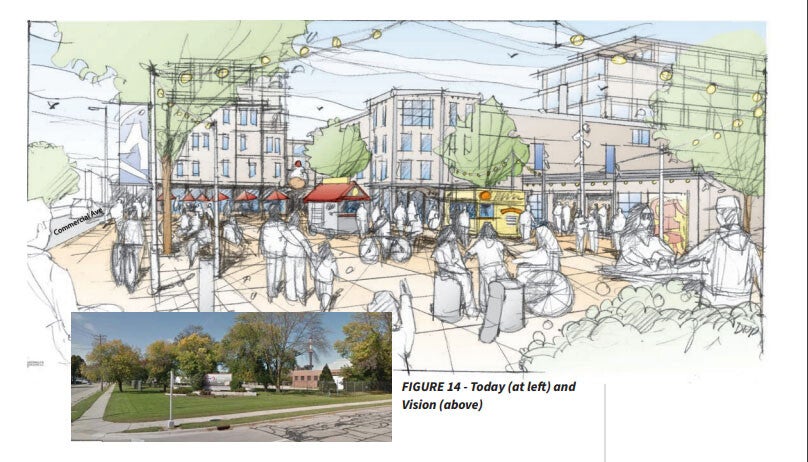 A sketch from the city of Madison's draft Oscar Mayer Special Area Plan, imagining what the area will look like after redevelopment. Oscar Mayer closed its plant in Madison in 2017 and left an economic hole in the city's north side. Rendering courtesy of city of Madison.

The city of Madison is planning the future of the area that was once home to an Oscar Mayer plant.

The east side plant operated in Madison for almost a century. When it closed in 2017, more than 600 people lost their jobs. The plant once employed about 4,000 at its peak in the 1970s, according to the city.

Last week, the city released a draft plan to revitalize the area, laying out steps to transform "the vacant buildings and sea of asphalt it is today."

For the 425-acre area, the city envisions a walkable new district that blends in with surrounding neighborhoods, offers new business opportunities and includes residents across the income spectrum. 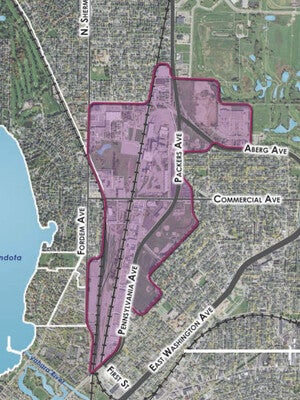 The boundaries of the area the city of Madison is looking to redevelop after the closure of the Oscar Mayer plant in 2017. Rendering courtesy of city of Madison

Less than 150 people live in the planning area now, but the plan says it can accommodate 2,500 new housing units and 4,000 new jobs.

"I’m really hoping that it provides a lot of opportunity for employment, not just for college-educated workers, but having a spectrum of jobs," said city planner Dan McAuliffe in an interview after the meeting.

The plan promises to put affordable housing in the mix, but Qiana Holmes-Abanukam said she worries the city won’t live up to that promise.

"The way things just typically tend to go in Madison is that we want to incorporate everything, but as you begin scaling down, for practicality reasons, that the little guys always tend to get left out of the picture," said Holmes-Abanukam, who lives in Madison and works on the city's north side.

The new housing could help accommodate major growth predicted for the city.

"Between the years of 2015 and 2040, projections show that we'll probably add about 40,000 new households total. So that's 70,000 residents to our city of a quarter of a million people," said city planning director Heather Stouder.

The area is in the heart of existing neighborhoods, making redevelopment a challenge, the plan states.

Even so, the plan’s other goals are wide-ranging and overlap with other city initiatives. A proposed new transit center would accommodate an updated bus system and "future intercity and local rail," both of which do not yet exist.

Josh Conners spent 23 years as an Oscar Mayer employee and still works on the property, managing it for new owners. He said he is looking forward to a revitalization.

"I think just to get people back in this area would be a great thing," he said.

Before the plan can start acting as a guide for future development, the city needs to approve it. Officials said Thursday the proposal will be in front of the plan commission Monday, Feb. 10. If approved there, the plan heads to the Common Council.