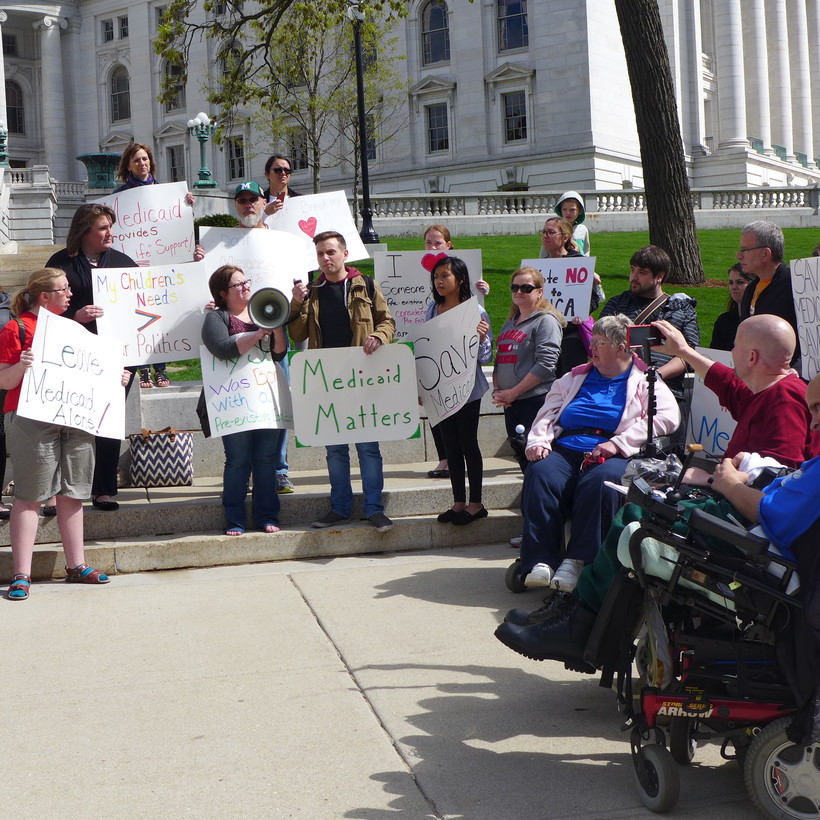 People gather outside the Wisconsin Capitol on Saturday, May 6, 2017, during a rally criticizing the American Health Care Act.

Parents From Across Wisconsin Take To Capitol To Speak Out Against GOP Health Care Plan
By Shamane Mills
Share:

Disability advocates spoke Saturday outside the state Capitol to criticize politicians for advancing cuts to Medicaid in the GOP health care bill that passed the House of Representatives on Thursday.

The advocates who gathered said the fact the House narrowly passed a bill last week to repeal and replace the Affordable Care Act shows politicians aren’t listening to the concerns of voters.

The House bill, which is expected to be modified in the U.S. Senate, calls for more than $800 billion in cuts to Medicaid. Disability advocates say Wisconsin could lose $1 billion if the Senate agrees with the House version of the American Health Care Act.

Katy Morgan-Davies, of Middleton, was one of about two dozen people at the rally Saturday.

"This is not us calling out Republicans," Morgan-Davies said. "It is not us patting Democrats on the back, because, frankly, the Democrats have been silent on how these changes would affect people with disabilities. This is not a partisan issue, this is a human rights issue."

Theresa Barnes, of Milwaukee, said her son was born with Down syndrome and has benefited immensely from speech and occupational therapy provided through Medicaid.

"He is now 15 years old and reading at a fourth grade reading level. That’s phenomenal for a boy with Down syndrome," Barnes said. "He has so much to offer; what will happen to him, to his life, if Medicaid were cut? Would he be put in a nursing home costing the state more money? What would happen to our son if we pass away? Who would take care of our son?"

About 24 adults and parents at the capitol Saturday explained how the joint federal-state health program has improved their lives.

Pam Delap, of Oshkosh, said her 16-year-old son with Autism is more independent because of services provided by Medicaid.

"Oshkosh Area School District received $860,000 last year through Medicaid to support students to get them the skills they need to work," Delap said. "We’ve got a resource shortage in the workplace. Why are we not supporting this population that can be working?"

Republicans have called for cuts to curb the growth of Medicaid spending. Delap said she understands the need to control spending.

Others at the rally disagreed about the need for cuts.

Beth Swedeen, executive director of the Wisconsin Board for People with Developmental Disabilities, said agencies providing services to those with disabilities are going out of business because of low Medicaid payment rates. She said politicians aren’t looking at what’s driving up the cost of Medicaid.

"How many of you are on prescription meds that have skyrocketed out of control the past couple of years? How many of you have looked at your hospital bills if you had to pay out of pocket and you see ridiculous costs for things that take just a few minutes for a (doctor) to do?" Swedeen said. "Nobody’s looking at who is making money, instead they’re putting this on the backs of people with the lowest incomes and with the most significant needs. It’s the wrong thing to do. It’s the immoral thing to do."