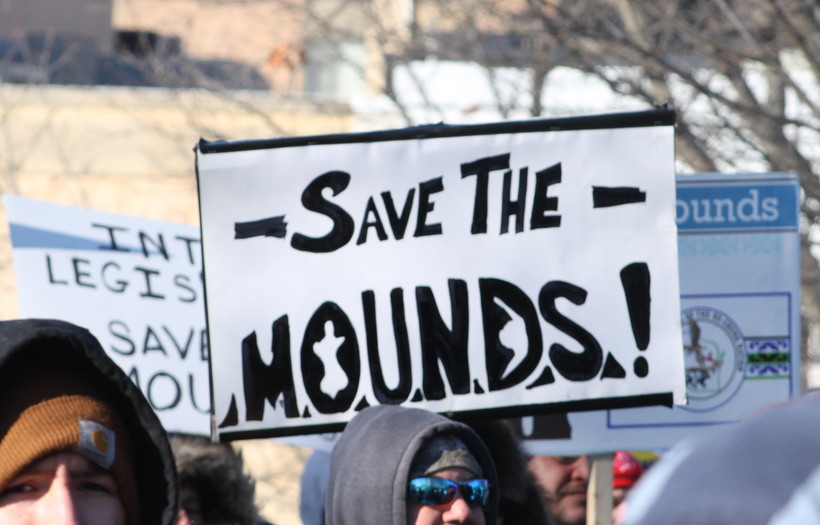 Quarry Owner Says An Excavation Would Be 'Scientific And Very Thoughtful'
By Bill Martens
Share:

Native American groups have come out strongly a bill that would let property owners dig underneath effigy mounds to check for human remains — as is abundantly clear from the hundreds of people who attended a rally at the state Capitol Tuesday to protest the measure.

However, the president of a Madison construction and concrete firm insists that if his company were to excavate an effigy mound group at a privately owned limestone quarry in McFarland, it would be done carefully and respectfully.

"Any excavation would be a very professional and very well-coordinated archaeological dig. It wouldn’t be any mass excavation or bulldozing of the mound," said Bob Shea. "It would be a scientific and very thoughtful ... small-scale dig, until they found anything that was human."

Shea's company — Wingra Stone & Redi-Mix — has long been at the center of a debate over digging up effigy mounds in Wisconsin. Since 1990, it has mined around a three-acre plot containing the mounds, after the Wisconsin Historical Society deemed the area a burial site and ordered its preservation. That decision set off a lengthy legal battle between Wingra and the Ho-Chunk Nation over the zone’s protected status.

Wingra has insisted that there’s no evidence that human remains at the site. The new bill would, in theory, allow the company to determine if that's actually the case.

However, its passage seems unlikely: Assembly Speaker Robin Vos told reporters on Tuesday that the measure probably won't be put to a vote before the end of the current legislative session.

Were Wingra to discover human remains by excavating the mounds at its quarry, Shea said the excavation would "immediately" stop and the land would be granted protected status indefinitely. If no remains were discovered, Shea said the company would look to fully excavate the land.

Surveys of the land using ground-penetrating radar and other means have been conducted in recent years, but their findings have been disputed by Wingra, as well as the Ho-Chunk.

"Human remains that are thousands of years old dissolve and become part of the earth. That’s what they were before they became bones," said Paul DeMain, chief executive officer of the Hayward-based Indian Country Communications and a member of the Lac Courte Oreilles tribe. "Just because you can’t see a human pelvis doesn’t mean that there aren’t remains there."

DeMain said that the mounds are not only Native American cemeteries, but represent religious and spiritual sites and ancient artwork "that rivals anything in the world."

Shea, for his part, said he understands that people have a deep respect for effigy mounds and that they hold great significance to the tribal members. However, he said that state law trumps those sincerely held beliefs, and that the law requires there to be human remains in order for the land to be protected.

The mounds rest inside the 57-acre quarry approximately 50 feet above the floor. Shea said mining around the site has created an isolated structure that cannot be disturbed, "yet can never be visited by the public, can’t be studied, can’t be enjoyed." He added that federal laws prohibit entry into mining operations.

About 1.5 million tons of limestone lie in the secured parcel, according to his estimate.