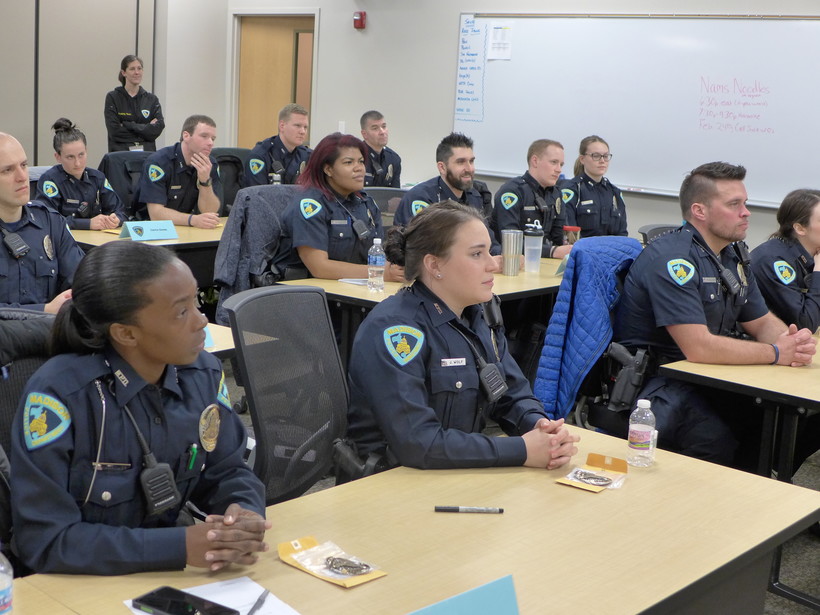 What's Next For These Future Officers And Their Community?
By Bridgit Bowden
Share:

Law enforcement cross the United States and in Wisconsin are under heavy public scrutiny, especially in the wake of high-profile killings of African-Americans at the hands of law enforcement.

It’s in this tense environment that the Madison Police Department's 23 police recruits are entering the profession. As the academy comes to a close, the recruits are one step closer to becoming real officers.

On the first day of the training academy back in September, Madison Police Lt. Marianne Flynn-Statz told the recruits they're "coming into a profession that's under fire like it never has been at any other time."

"I've learned that I can mentally, physically, emotionally spiritually ... how far I can stretch myself," Miles said. "I had no idea starting out what a journey this would be."

Miles has wanted to be a police officer since she was 8 years old. But even so, going through the academy actually improved her perception of police.

"I definitely have more respect for officers," Miles said. "It's not just, you know, cops and robbers. It's so much more than I've ever imagined it could be."

Recruit Clare Gloede said she also didn't fully understand of the scope of what law enforcement do before going through training, even though she grew up in a Madison Police family. Her dad recently retired as a captain.

"I knew the uniform, and I knew if I needed help, I call 911, and I knew the family structure, but that was pretty much it," Gloede said.

Services like welfare checks and mental health crisis intervention stuck out to her as things that are "maybe not seen by everybody," Gloede said. And training has given her a new outlook and more context on controversial topics like the use of force.

Now, as the recruits leave the academy, they’re headed into three months of field training. Gloede feels prepared and a little nervous.

"People are going to look at you different," Gloede said. "You're not maybe seen as the person, you're seen as the uniform."

Field training for police officers could be seen as the equivalent of a medical professional's residency. The recruits start out mostly observing their trainers, and by the end of the three months, the roles flip, and the recruits become the primary officers.

On the last day of the academy, Madison Police Chief Mike Koval told the recruits about his own experience in field training, including a story about one particularly strict training officer who failed him for the day if he didn't turn on his portable radio. But, he said that’s part of the process. The recruits will be constantly graded throughout field training.

"I realized that he was telling me profoundly that that's your umbilical life cord," Koval said. "I am actually saying that I learn more from my mistakes than from my victories."

At the end of the class, Koval reminded the class of the high level of scrutiny police face.

"You are defacto public figures," he said. "We are held to a higher standard of conduct and ethics, and I wouldn't trade it for anything, that's as it should be."