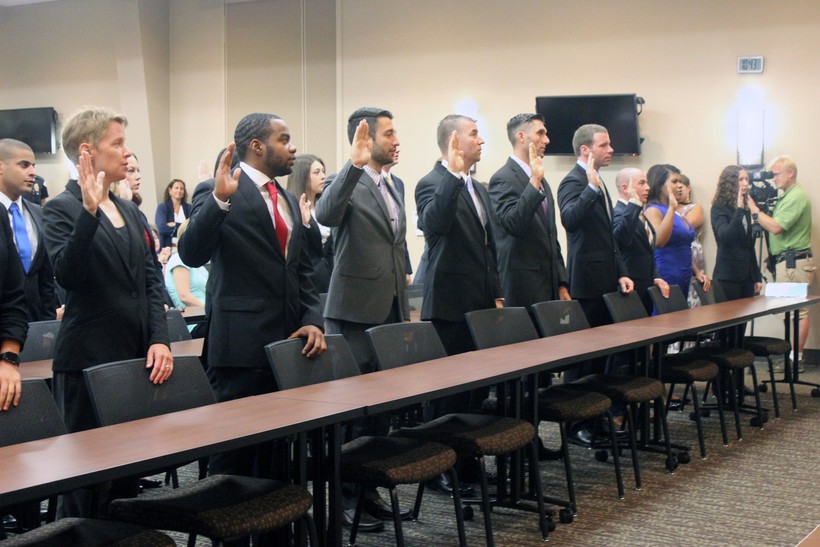 Members of the 59th class of the Madison Police Department Training Academy are sworn in Monday, Sept. 12.

During their first week in the Madison Police Department Training Academy, the 23 new recruits were tested physically and mentally. A few minutes before 8 a.m. on their first day, they were sitting at desks dressed in suits and ties. The class was greeted by Lt. Marianne Flynn-Statz, who runs the academy day-to-day. She opened with a serious message.

"As you know, you're coming into a profession that's under fire like it never has been at any other time," she said. "And here at Madison, we're incredibly proud of how we train."

The recruits' first day was both exciting and nerve-wracking. After a short orientation, they took an oath in front of Mayor Paul Soglin, police Chief Mike Koval, their families, other officers and community leaders.

The second day, that nervousness had mostly evaporated. The recruits took a fitness test that includes a mile and a half run, a sprint, pushups, sit-ups, a vertical jump and an agility run.

Andy Deuchars, 39, is belayed to the ground after jumping off a telephone pole at the Bethel Horizons ropes course. Bridgit Bowden/WPR

The class is nearly 70 percent white, which is slightly less than Madison as a whole. Of the 23 recruits, 10 are are female. Julie Clayton, 22, moved from Milwaukee to take the job. She said her family was surprised when she told them she wanted to become a cop.

"They thought I was going to go into music," she said. "I played flute for a long while, and so that's how most of my friends and family knew me, and that's what I originally went to school for."

Now, she's finishing up a degree in criminal justice. She wants to be an officer because she wants people to see the police as allies.

Five members of the class are older than age 30. Seventeen of them have at least a bachelor's degree, including Jessica Gillette, 38, who has a master's in peace and conflict studies.

She said she considered the current tension between police and communities of color while she was going through the application process.

"It really caused me to pause and reflect," Gillette said. But, her desire to see a shift in the profession motivated her to continue. She applied three times before she was accepted.

"It's a trying and challenging time to get involved, but I think it's the most important time to get involved," Gillette said. "Especially as someone who's coming from a peace studies and conflict studies background as a peace practitioner, because that's really what we advocate in this department. You know, we're guardians of the community. We're not warriors, we're protectors."

At the end of the first week, the class spent two days at the Bethel Horizons ropes course near Dodgeville. The course was physically challenging. They rappelled off a cliff, jumped off a telephone pole and climbed a rope ladder whose rungs were several feet apart. But to complete the challenges, the class had to work together and rely on each other. Pierick said by the end of the course, he felt he was part of a team. Justin Cumley, 32, rappels off a cliff at the Bethel Horizons ropes course near Dodgeville. Bridgit Bowden/WPR

"I just feel, I guess a lot more excited, less nervousness and more excitement for the academy and to go through it," he said. "And it's been great seeing the class bond and get together doing the ropes course, even just in class. So I feel like we're already pretty close as a class, and I'm looking forward to continuing that."

In the coming weeks, the class will dig into law, ethics and cultural competence. The training academy continues through February.

This story is part of an ongoing WPR News series looking at people who are beginning their law enforcement careers. Reporter Bridgit Bowden is spending the next few months following a class of recruits through the Madison Police Department Training Academy. The stories can be heard on Morning Edition, the Ideas Network and online at wpr.org.