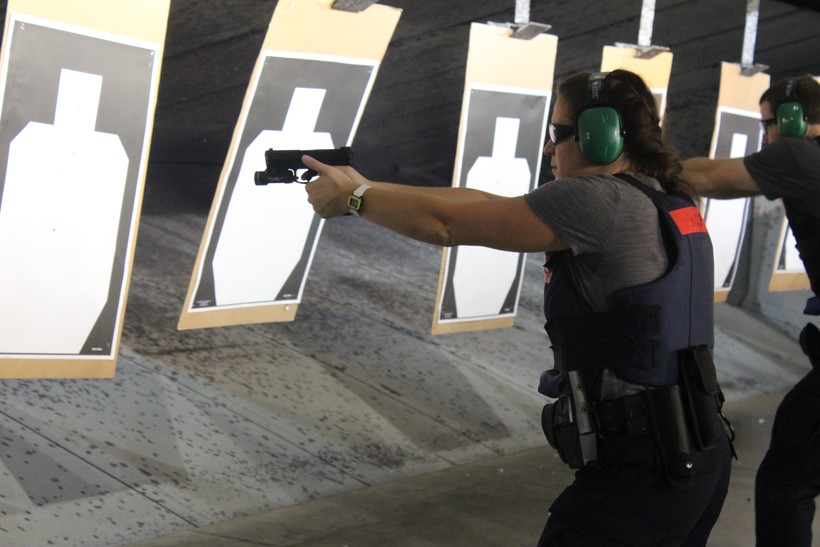 Madison Police recruit Jessica Wolf fires at a target during a training exercise.

Madison Police Recruits Learn What Happens After They Shoot

New police recruits are entering the field at a time when police shootings in Wisconsin and across the nation have drawn intense scrutiny from the public.

As a part of the Madison Police Department's training, each recruit is put through a mock shooting, from pulling the trigger all the way through the investigation. It's meant to teach them what to expect after a so-called "officer-involved critical incident."

These can include shootings, in-custody deaths and serious car crashes that involve squad cars.

The training starts with a scenario. The recruits get a pretend call that there’s an unwanted person in a building. They believe their partner has found the person. But when they open the door, they see their partner sprawled on the ground as a man swings a shovel at his head. There's a pool of blood on the ground near the downed officer's head. So, every recruit draws their gun and fires multiple rounds. After that, they're quickly removed from the scene to give a public safety statement.

Officer Chris Masterson developed much of the curriculum for this block of training. This scenario was difficult, he said.

"Some of them were very stressed, some of them had genuine, like they felt guilty, like their partner got hit because it took them too long to draw their gun out or their decision making directly affected their partner, which is good," he said. "It means they took the scenario real. But also shows how emotional these things can be ... they know it’s fake."

The next day, they’re interviewed by an MPD detective and an agent from the state Department of Justice's Division of Criminal Investigation. Since 2014, state law has required all officer-involved shootings to be investigated by an independent agency, like DCI.

Before recruit Mark Gulden joined the MPD, he was a University of Wisconsin-Madison officer. In 2010, he was involved in a critical incident where a drunk driver crashed and died. He said the exercise is a pretty accurate simulation of what actually happens after a critical incident.

"I don't know if it can ever prepare you for when something like that happens," he continued. "But it definitely exposes people to the possibility or what is the next step if something happens like that."

Lt. Marianne Flynn-Statz, who oversees the training academy, was a member of the department's original team that deals with officer-involved shootings. She said this block of training is separate from the use of force training, where they learn how to decide whether or not to pull the trigger. It’s about what happens after that decision is already made.

"It's likely the most isolating and life-impacting event that they're ever going to encounter," she said. "As trainers we have a responsibility to prepare them for that worst day of their life when they've had to make a deadly force decision."

MPD has dedicated standard operating procedure about stress management after a critical incident.

In 2014, Sgt. Dave McClurg and another officer shot and killed a man who charged them with a knife after stabbing several other people. Both were cleared in an internal investigation into the shooting. As a part of the training, McClurg spoke to the recruits, sharing exactly what was going through his head before, during and after the shooting. He said he reacted exactly as he was trained.

"Our training is who we are and it's the way we do business," McClurg said. "If there's critiques to be made, which maybe there are, there's certainly always room for improvement, I think the thing to look at is the training."

His is advice to the recruits is to take their training seriously.

"There are so many things that people get put through in training that potentially you could be involved in," McClurg said. "We have a violent world, you know, and if you can do that and do some preparation on their own and just thinking through some of the scenarios and how you'd respond ... I think it presents a better-rounded person who's able to deal with these things."