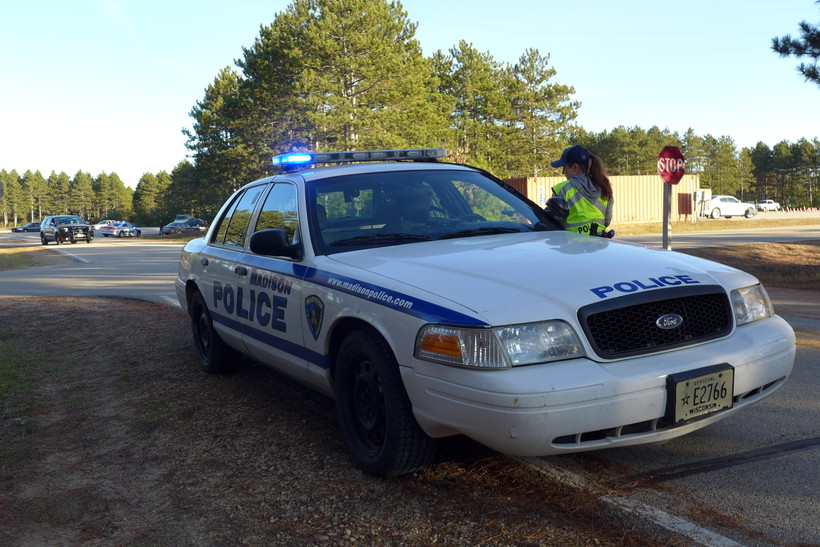 Madison Police Department Recruit Stephanie Nelson gets into a squad car at a training exercise at Ft. McCoy.

A Madison Police Department recruit gets into a squad car. Bridgit Bowden/WPR

When police officers get a call, the first thing they have to do is get there. For new officers, this can be particularly difficult. For the Madison Police Department's 23 new recruits, learning the city’s geography is one of the biggest challenges.

In the Madison Police Department Training Academy, geography is a four-hour block of training that takes place in a computer lab. Officer Bob Veatch started the class by telling the recruits he won't be able to teach them everything they need to know about geography.

"I can't say 'OK this is how you get every single place in the city,' he said. "What I'm going to try to do is spend some time showing you some tools that you have at your disposal to help you figure out how to get places with the tools we have."

In the classroom, the recruits learned how to use a few different navigation tools including a paper map and an interactive web map.

Veatch asked the 23 recruits to think about what roadblocks they might encounter when trying to get around Madison. He said Madison's geography is tricky to navigate for a few reasons. Because of the isthmus, it’s not on a grid. One-way streets are common downtown. And streets like East Washington and West Washington don’t take you the direction that their names promise. It's a common source of stress for new officers, Veatch said.

"This is something that just really scares people, it makes them nervous," he said. "Even people from Madison get nervous doing this as a police officer."

Recruit Brenna Puestow said it’s one of her top concerns because geography isn't something you can learn in a classroom.

"It's one of the things we have to really focus on on our own time and just really hammer it in ourselves instead of having someone teach it to us," she said.

The training academy consists of 864 hours of training over about six months, which can make it hard to find time to just drive around and learn the streets.

"We have so many other things to focus on and get done even on our own time to justify skipping, you know, studying for a big test to just drive around for a couple of hours," Puestow said. "So it's a balance, and you have to figure out what works for you."

Recruit Lauren Bucheger moved to Madison a few months before the training academy started. She was worried she wouldn’t know her way around when she started taking calls as a police officer.

"So it's not only, 'OK what do I do on the call,' it's, 'How do I get there,'" Bucheger said. "And so you can't really focus on what to do at the call because you're so worried about how do I get there."

"That was one of the favorite parts of the job," she said. "I would have deep conversations with people in the back, and I had a couple people say, 'I should have paid you $40 an hour for a therapy session.'"

She also became familiar with Madison's low-income neighborhoods, which she said will help her when she becomes an officer.

"I may have contact with someone just driving them around to that neighborhood that we're going to frequent as officers," she said. "Darbo, Vera Court, those types of neighborhoods that have neighborhood officers because they have a lot of calls for service there. I was able to go to those in a different capacity and interact with lower-income people in that different capacity."

When the academy ends in late February, these recruits will go into field training, where they’ll get hands-on experience navigating the streets of Madison.