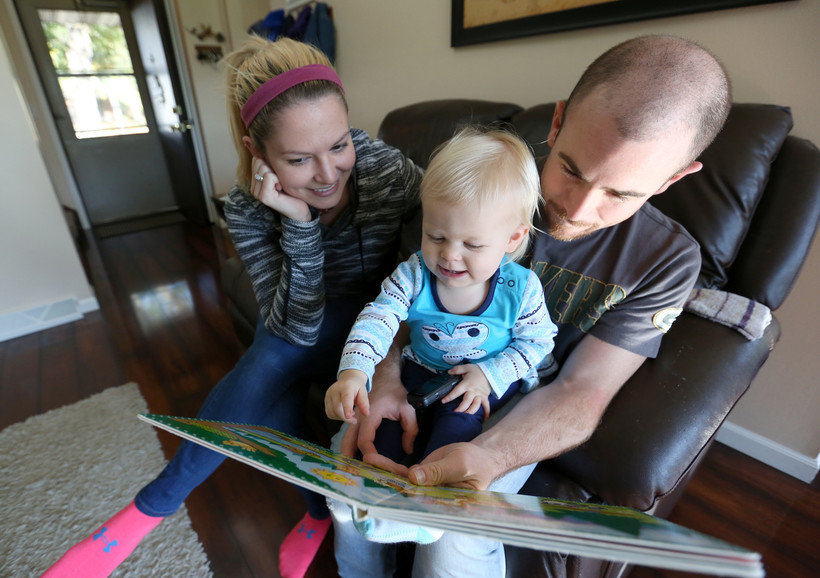 Recruit Nick Cleary with his wife, Kayleigh, and daughter, Felina.

For Recruits With Families And Children, Another Layer of Challenges
By Bridgit Bowden
Share:

For as long as Madison Police recruit Nick Cleary's wife, Kayleigh, has known him, he's been a police officer. Before he was hired in Madison, he was an officer in Fitchburg. In fact, the two met when Nick pulled Kayleigh over for a broken license plate light. They played the video of the traffic stop at their wedding.

But even though Kayleigh is used to Nick's job, it's still hard for her, especially now that they have a 17-month-old daughter, Felina.

"There's a baseline layer of worry that doesn't ever go away, even on off-days," Kayleigh said. "Especially with her. And I think that's probably the biggest thing, is just the worry that something would happen to him."

Just this year, more than 100 officers have died in the line of duty, according to the Officer Down Memorial Page. Kayleigh said she often wonders how Nick copes.

"He comes home and he can just, like, shut off his cop brain, and he's just Nick," she said. "And he'll come home and tell me stories about work, and I'm just like, 'How are you OK? How are you just like totally chill and come home and put your feet up on the table and that kind of thing?'"

The recruits are in their eleventh week of the six-month academy. Of the 23 recruits, about half are married, and a handful have kids.

Jessica Gillette applied to the Madison Police Department Training Academy three times before she was selected for this year's class. She seriously considered her 6-year-old son, Noah, before deciding to become an officer.

"Having a child makes you think perhaps a little bit more about the sacrifice you're making as far as going into policing because of the innate dangers it does involve," Gillette said. "But for me it's important to show him, as his mother, as a strong female role model, that this really is my passion and this what I'm really willing to sacrifice."

Gillette and her family were living in Germany before she was hired by MPD. They moved back because she wanted to raise Noah in Madison. But he's still pretty young to fully understand her career change, she said.

"I haven't really sat down with him, per se, and outwardly asked how do you feel to have a mom as a police officer?" she said. "I imagine those conversations will come up. He hasn't seen my duty belt or my gun or anything like that."

Gillette sometimes comes into the academy for extra practice with firearms or defense and arrest tactics. But with studying, extra practice and family, she has to make choices. She doesn't just have herself to take care of, she said.

"I do have other responsibilities, which I think helps balance this stress of what's going on in my life because I can somehow separate it, because I have to," Gillette said. "But, at the same time, I don't have the luxury of being able to devote all my free time to the work that I would like to be able to put into the academy that I just can't."

For these recruits, it's a constant balancing act. And that will most certainly continue when they're sworn in as officers next spring.