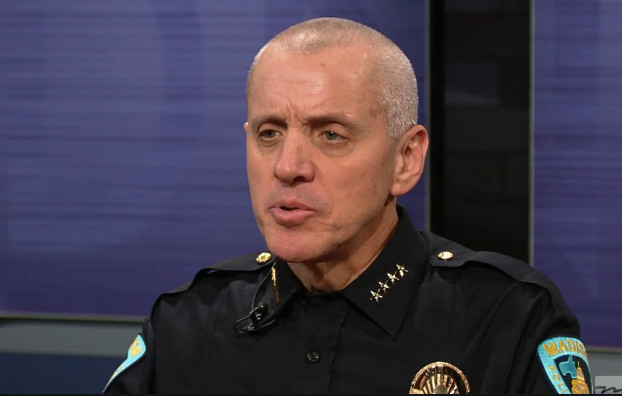 Critics Of Standard Say Officers Should Be Trained To Use As Little Force As Possible
By Gilman Halsted
Share:

Madison Police Chief Mike Koval said Monday he won't consider changing the standard for determining whether a police officer is justified in using deadly force, although local reform activists say the standard has led to an increase in police-involved shootings.

In his most recent blog post, Koval said that what is known as the "objective reasonableness standard" is non-negotiable. The standard is based on a 1989 U.S. Supreme Court ruling that critics say gives police too much leeway. It requires officers using deadly force be judged from the perspective of what a reasonable officer on the scene would do.

Amelia Royko Maurer of the Coalition for Community Oversight of the Police said the standard shouldn't be used as the basis for training officers.

"They have no reason to be training to the objective reasonableness standard as is without heavily relying on the moral standard of using as little amount of force necessary," said Royko Maurer.

A city task force plans to review local police policies in light of the recent fatal shooting of an unarmed 19-year-old man by a Madison police officer.

Koval said in his blog post that he's open to having the department's policies reviewed, but predicted there will be no change in the lethal force standard. He said the standard is not used as the focus of training, but that changing it would be unfair to officers who are trained to not to use lethal force, especially with an unarmed suspect, unless it's clear there is no other alternative.

The president of the Wisconsin Professional Police Association, Jim Palmer agrees. He said that because the standard was established by the Supreme Court, any change would be unenforceable in a court of law.

Royko Maurer said police officials should look at the statistics before rejecting a change. She said using the least amount of force necessary as a central training focus did not increase the number of officers dying when interacting with unarmed people.

Royko Maurer has been researching the issue of police use of lethal force since November of 2012, when her roommate Paulie Heenan was shot and killed by a Madison police officer. She played a major role in getting a new state law passed that requires an outside agency to investigate all officers involved fatalities.​