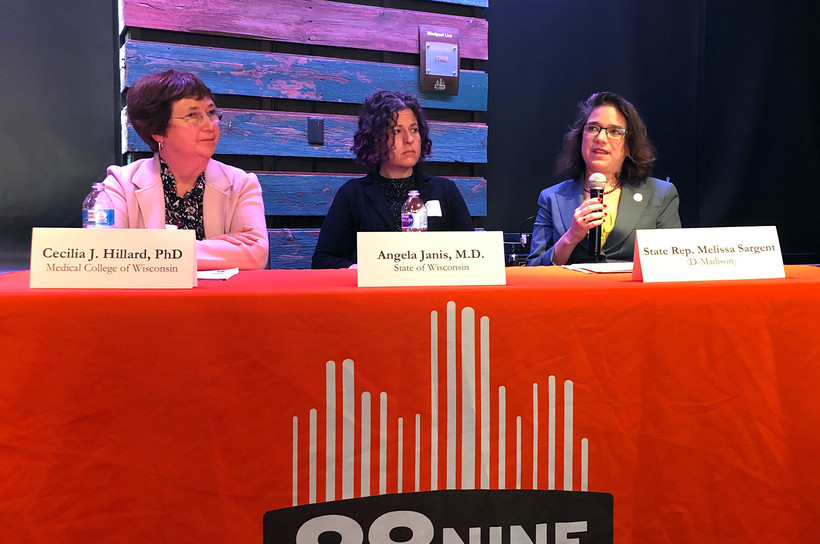 Madison Lawmaker Says It's 'When Not If' Regarding Marijuana Legalization

Doctor: I Would Not Classify Cannabis As A Medicine
By Corrinne Hess
Share:

A Madison Democratic legislator who has been pushing to legalize marijuana in Wisconsin for seven years said Monday the only place the issue continues to be partisan and divisive is in the state Capitol.

State Rep. Melissa Sargent said that behind closed doors, lawmakers from both sides of the aisle agree medicinal marijuana will be legal in the state.

"The most dangerous thing about marijuana in the state of Wisconsin is it is illegal," Sargent said at a Milwaukee Press Club panel on medical marijuana at 88Nine Radio Milwaukee. "It’s not if, it’s when. The genie is out of the bottle folks. This is going to happen."

Sargent, who most recently was the lead sponsor of a bill introduced in May 2019 that would change state law to permit both recreational use and medical use of marijuana, said the reason legalization hasn’t moved forward is because of Assembly Speaker Robin Vos and Senate Majority Leader Scott Fitzgerald, the top Republicans in the state Legislature.

Aside from Sargent, the panelists included Dr. Cecilia Hillard, associate dean for research at the Medical College of Wisconsin, and psychiatrist Angela Janis. Vos, R-Rochester, was scheduled to be a panelist but canceled.

Marijuana has been approved for medical use in 33 states and for both medical and recreational use in 11 states. More than $3 million in marijuana was reportedly sold on the first day of legal sales of recreational marijuana in Illinois last month.

The debate over marijuana — for both recreational and medical use — has been ongoing in Wisconsin for several years.

In December, Republicans introduced a medical marijuana bill, however, Fitzgerald has voiced his opposition, saying there aren't enough votes to pass it. Vos has said the Assembly will wrap up business for this legislative session by the end of February. Fitzgerald has said the Senate will finish in March.

Hillard said calling marijuana medical reduces the perception that it can cause any harm.

Hillard said only three things have been proven using placebo-controlled, blind trials regarding cannabis. Those are that the drug can help with some forms of chronic pain, can control nausea and vomiting especially in cancer patients, and can help patients with multiple sclerosis.

"Other than its ability to treat pain in some cases, I'm not sure I would really classify it as a medicine," Hillard said. "We all hear anecdotal reports (about other uses), but we don’t have the data. That’s my concern. And that can be filled with more research. That is a key to all of this."

Sargent said lack of marijuana regulation and education is creating harm in the state.

"Prohibition and lack of ability to do pragmatic research is a real hurdle," Sargent said. "People are using, they are selling, they are growing, distributing, producing. We have all the components that we see in Illinois or Colorado, but it is all underground."