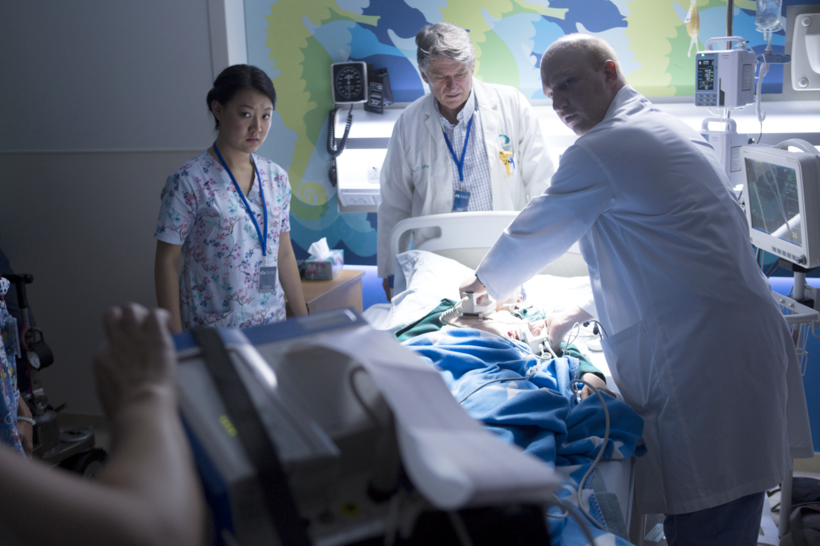 Dr. Jonathan Kohler, on right, playing a doctor in a scene of the movie "A Family Man" with Gretchen Mol and Matthew Jenkins. Kerry Hayes

When smash hit medical drama "Grey’s Anatomy" premiered in March 2005, Dr. Jonathan Kohler was completing his medical residency at the University of Washington.

Though he was working in Seattle, where the fictional show takes place, it didn’t look like his life.

"They’re outside the hospital in daylight, and there’s a lot more canoodling going on than I was seeing in our hospital," he told WPR’s "Central Time." "And more importantly, I felt like TV could be doing a better job to show people what it meant to go to the hospital."

Interested in theater from an early age, Kohler decided he wanted to be more involved in the storytelling process of shows like "Grey’s."

Kohler, an assistant professor of pediatric surgery at the University of Wisconsin-Madison, has owned his own consulting company since 2005, RxCreative, which helps television and film writers and producers create accurate medical narratives.

He started out working with a group at the University of California, answering one-off questions for film and television writers — a "human Google," he calls it.

Today, he typically helps writers remotely, who are creating individual episodes with a medical plot line, and need help being realistic.

"And then if we’re shooting a full on medical scene, oftentimes I’ll go to the set and be on set and make sure all the visual details are correct," Kohler said. "And then I can help the actors understand how to portray illness and understand how to be a doctor."

Sometimes, there’s friction between the need to be dramatic versus the need for medical reality. In those situations, Kohler helps teams find compromise.

"If they come back to me and say, 'There’s just no way we can portray this disease taking three weeks, it has to happen over three days,' usually we can figure out a way to make that realistic," he said. "Maybe we just need a different disease."

Most recently, Kohler consulted for "A Family Man," a movie about a headhunter whose career aspirations are put on hold when his son falls ill.

Kohler helped movie creatives find both an illness and revolutionary treatment that fit the storyline. They settled on CAR T-cell therapy, a brand new treatment for leukemia that involves engineering a patient’s immune cells and reinjecting them.

"At that point it was two case reports. And we wrote the script around that, I helped the writer be able to do that, and we told the story of this kid getting this revolutionary therapy," he said. "Around the time the film came out earlier this summer, the therapy was approved and is now looking like it’s going to be an incredible therapy for leukemia and lymphoma. That was really cool to sort of have anticipated a bit new development in cancer therapy."

He also stood on set for two weeks of filming, tweaking every medical scene. He was accurate down to the vital signs monitors in the hospital — which he says tell a story for viewers in the medical industry.

Not every television medical scene gets it wrong, either, Kohler said. Other than "MASH," which he calls an "untouchable legend," one of the most accurate scenes he’s ever seen is season 1, episode 11 of the television show "Scrubs" — the Christmas episode.

"I think that show is hugely influential among doctors," he said. "I think we all recognize that it captures, with comedy and with sort of outlandish situations, the reality of what it means to be a doctor, better than most any show I’ve ever seen."