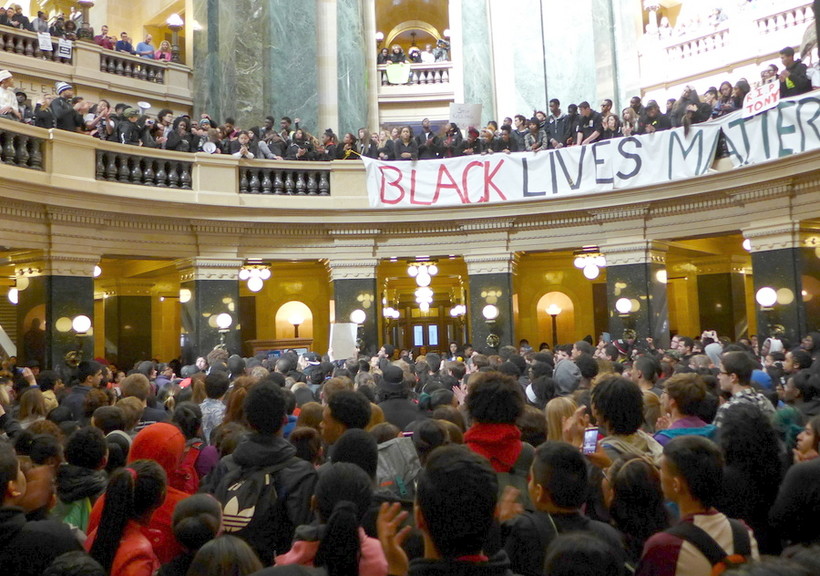 Fatal Shooting Of 19-Year-Old Has Led To Protest, Calls For Change
By Christie Taylor
Share:

In the wake of Friday’s police shooting of an unarmed biracial 19-year-old in Madison, two community leaders are offering different pictures of what justice might look like.

The city has seen protests and vigils every day since the shooting, with a student walkout on Monday afternoon drawing more than 1,500 high school students and other city residents to the state Capitol.

M. Adams: Indictment Is The Only Justice

M. Adams is a leader and organizer for the Young, Gifted and Black coalition in Madison, which has been organizing since last summer in the name of ending state-sanctioned violence against black people. Adams said that violence includes both police shootings and mass incarceration.

She said the recent protests, which the coalition had also brought to a city Police and Fire Commission meeting Monday night, were part of a campaign to hold the city and Police Department accountable for what she said is the "murder" of Robinson. She said Tuesday that an indictment of Officer Matthew Kenny, who shot Robinson, would be the only acceptable form of justice.

"That’s what would set Madison apart from other cities like New York or Milwaukee," she said, referring to the officer-involved deaths of African-American men Eric Garner and Dontre Hamilton in those cities. As with the officer-involved death of Michael Brown in Ferguson, Missouri, neither officer involved in those cases was found guilty of a crime.

Said Adams: "What has to be different here is the conviction of the officer."

Adams said she did not see any reason for the state Department of Justice, which is conducting an independent investigation of the incident, to exonerate Kenny. She said she saw no reason for an unarmed man to be shot five times — what police reported to have happened — no matter the circumstances.

"The force was excessive, there’s no question about that," she said. "If the police’s job is to protect and serve and to presume innocent before guilty, that should have been afforded to Tony Robinson."

The coalition has also asked the city to pay for funeral expenses for Robinson’s family, and change how the city polices the African-American community. Before the shooting, the coalition had also demanded that the Police Department stop patrolling the city's black communities. Adams said protests and other direct action would continue pending the asked-for indictment.

Meanwhile, Michael Johnson, president and CEO of the Boys and Girls Club of Dane County has also been vocal in the community response to Robinson’s death.

He urged people to not rush to judgment, saying not all the facts in the case are known. He also urged against dividing or polarizing Madison communities.

He quoted Robert Kennedy, saying: "’What we need … is not division … but it is love and wisdom and compassion towards one another and a feeling of justice toward those who still suffer … whether they be white or black.’"

Johnson said he thought Madison Police Chief Mike Koval, who issued an apology in his blog Monday, had been responding sensitively to the shooting. He noted that Koval visited Robinson’s family the night of the event, and has supported protests in the days since.

"He is demonstrating empathy," Johnson said. "Any time you lose a loved one, you need to be able to demonstrate that, no matter what the facts may be. And he’s doing that."

He also said he thought Madison had many advantages over Ferguson, which was rocked by protests and a militarized police response following Michael Brown’s death.

"We have a diverse Police Department. We have a police chief who is culturally competent. They’re treating the protesters with dignity and respect," he said.

Johnson said Gov. Scott Walker had agreed to meet with him Wednesday to discuss the shooting. He said he had not yet decided what would be on the agenda.

"I’m going to meet with a couple of key leaders in this community and decide what that agenda looks like," he said.

He noted that there's a lot of racial inequality in the state in terms of employment, incarceration, graduation rates, and more.

"We need to invest in more skill-based training for our kids, we need to put more resources in our schools, and we need prevention programs to keep young people out of jail," he said.

As for Madison, Johnson said he hopes Tony Robinson’s story will lead to longer-term changes in a city that has long been associated with progressivism.

"When I think about a progressive Madison, I think of a Madison that is the best place for all people to live no matter what your color may be," he said. "Even though we’re the fourth-safest city in the country, we have some young people in this city who are scared right now. As adults, we have to make sure that we give them that safety net."