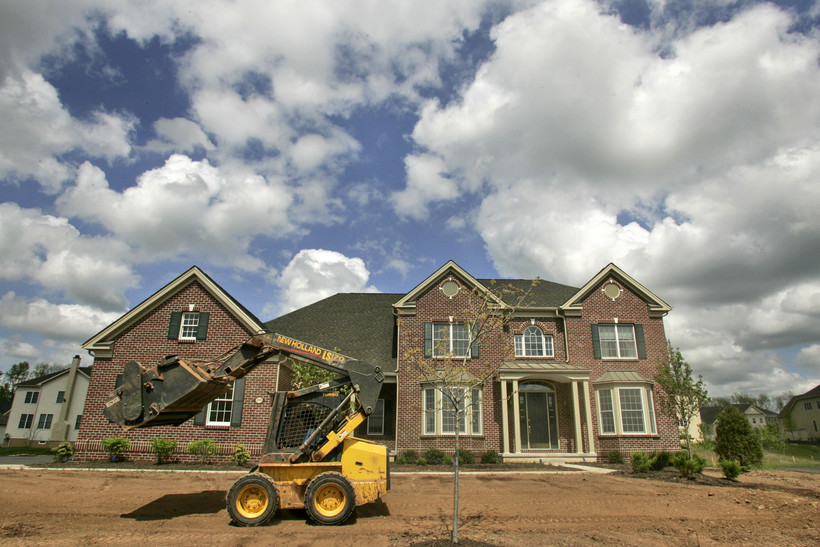 A landscaper works at an unfinished house at a Toll Brothers development in Oaks, Pa., on Wednesday, May 9, 2007.  George Widman/AP Photo

As Luxury Homes Become The Norm, What Do We Lose?

A group of children splash in a swimming pool. Not far away, their parents chat over food and drinks.

A few decades ago, this scene might have taken place at a community pool or public park. But in 2018, it’s under the shadow of a luxury home, complete with a massive deck, winding staircase, and vaulted ceilings.

"We know that teenagers eventually get in the car and go away," a woman says in the advertisement for luxury home builder Toll Brothers. "But we want them to come here.”

Massive homes have become part of American culture, promoted as an extension of our personalities, a family gathering space and a way to "live better," says Alexandra Staub, an associate professor in the Penn State Stuckeman School of Architecture and Landscape Architecture.

"Housing, for the wealthy, has always been a way of representing their wealth," Staub said. "We have a situation now where ever-increasing parts of the upper middle and then middle class are being encouraged to do the same thing."

But as Staub writes in a May piece for The Conversation, that’s not necessarily a good thing. And it’s amid an affordable housing crisis that leaves half a million Americans homeless on any given night.

For instance, while adults of a certain age may remember the community swimming pool, it’s increasingly a thing of the past. That’s because 4 million Americans owned private swimming pools by 1999, compared to just 2,500 in 1950.

"We don’t have as many spaces as we used to where people can just serendipitously come together and meet other people," Staub said. "These so-called ‘bunk rooms’ where you just happen to bump into people and strike a conversation."

While public television’s "This Old House" may have kicked off the trend, home improvement television shows have skyrocketed in popularity since HGTV went on the air in 1994, she says.

With the home as the new community space, then, these shows convince Americans that their home is an extension of themselves. Home improvement isn’t just replacing an old appliance anymore, but gutting the home from the ground up, proving that even a relatively small home can become a luxury home when the right amount of money is poured into it.

"Essentially we’ve taken housing and turned it from something we all need," she said. "To a commodity that we’re being encouraged to monetize in some way. And I think that’s really created a rat race where people are trying to show ever more that they have a certain level of success based on their housing."