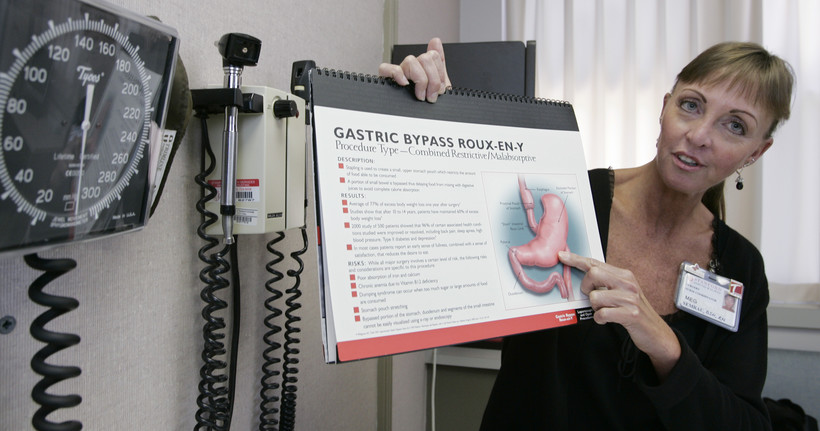 For many people unwanted weight is a lopsided battle they can’t win. Exercising may be difficult, if not impossible. And eating an addiction. Melani Kambitsi says weight-loss surgery was the most magical thing she's ever done in her life. Shamane Mills/WPR

Fifty-three-year-old Melani Kambitsi says she was "chubby" as a child and remembers her mother putting her on a diet when she was as young as five years old. She loved food but with some restrictions, she was able to maintain a reasonable weight until about age 30. That’s when she became a young executive with long work hours.

A sedentary lifestyle and unhealthy diet are reasons many find themselves packing on the pounds. And the age group tipping the scales the most is surprising, even to experts.

"I found this and was really surprised — the age range where the greatest jump in obesity is? I wouldn't have guessed it but it's between the 18-24 group and the 25-34 group," Morgan said. "It would be awesome if we could prevent everyone from becoming obese but at this point the horse is kind of out of the barn and we are dealing with a huge public health issue," said Dr. Anne Lidor, a bariatric surgeon at UW Hospital and Clinics.

According to her, Wisconsin is one of three states that do not cover bariatric surgery for public employees.

Lidor urged businesses to consider offering insurance that covers weight loss surgery. During the presentation — that Morgan and Kambitsi also participated in — Lidor ticked off a long list of health problems related to excess weight, things that can be reversed by bariatric surgery:

"Diabetes, sleep apnea, cholesterol, hypertension, heart disease, reflux the list goes on and on ... ," she said.

Kambitsi had several of those conditions, all of which got better after she had weight loss surgery in 2009. At the time she was 5 foot 2 and weighed 325 pounds. Her body mass index was 43 and she was considered morbidly obese. According to the National Heart, Lung, and Blood Institute, a healthy BMI is anywhere from 18.5 to 24.9. In an attempt to get healthy, Kambitsi had 75 percent of her stomach removed in a procedure known as laparoscopic sleeve gastrectomy.

"It has absolutely been the most magical thing I’ve ever done in my life."

Kambitsi went on to describe how weight loss surgery controlled her diabetes, using the lingo of doctors and those who live and die by the numbers of their disease.

"It has helped me bring down my hemoglobin a1c from 13.7 which is an atrocious level, down to a 5.1 for the past 10 year. My blood pressure is very normal, 110 over 70 most of the time, and no cholesterol. I have absolutely no cholesterol issues," said Kambitsi.

There have been long-term studies which show patients no longer suffer from obesity-related conditions after they've had bariatric surgery. Yet few insurance companies in Wisconsin cover it. Quartz started covering the procedure in January of this year, however it is not part of the state employee health plan.

Kambitsi paid $25,000 out-of-pocket for her operation, which she had in Pennsylvania before moving to Madison for her job. She works at The Alliance, a group of employers which seeks to improve health care quality and reduce costs. She calls bariatric surgery  "a life-saving operation."

While Kambitsi is sold on weight loss surgery many insurers aren’t.

Companies may be reluctant to cover it because of the initial expense. Cost savings from better health come later and by then, the employee might be working somewhere else. Medicare and Medicaid both cover bariatric surgery.

Correction: An earlier version of this story included a misspelling of Jonathon Morgan's name. It has been updated.