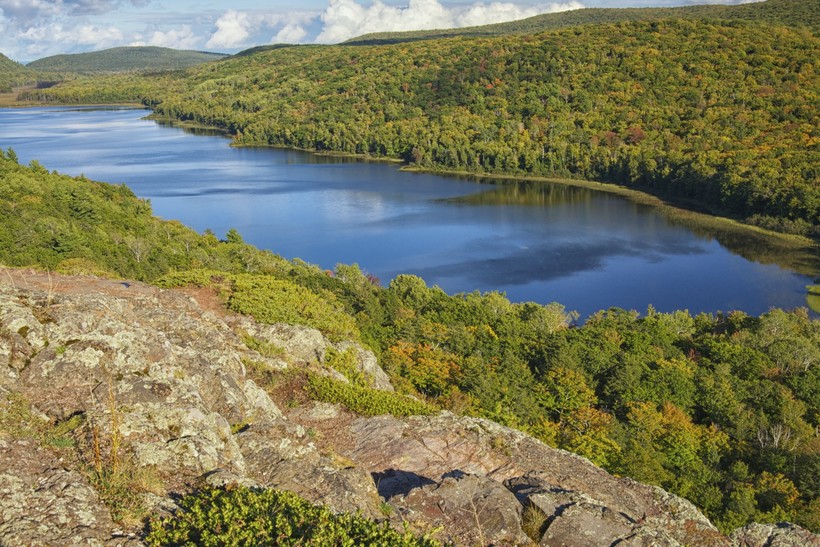 Lake of the Clouds rests in Porcupine Mountains Wilderness State Park in the Upper Peninsula of Michigan. Jim Liestman (CC-BY-NC-ND)

Looking For A Trip Out Of Wisconsin? Here's Five Places To Visit In Michigan

Lakeshore, Waterfalls Among Areas To Visit
By Breann Schossow
Share:

While there are plenty of adventures to be had in Wisconsin, sometimes a trip out of state is worth considering.

Here are five places to check out in Michigan's Upper Peninsula, according to Dave Lorenz, vice president of Travel Michigan.

Pictured Rocks National Lakeshore is a "spectacular place," according to Lorenz. This space rests on Lake Superior and is in the middle of the Upper Peninsula.

The shore owes its name to the sandstone cliffs that edge the lake with streaks of color, ranging from white to purple and red.

"It's beautiful," Lorenz said. "You get these naturally formed streaks, looks like ... Mother Nature's been painting with big brushes on these beautiful rock formations, and as these rocks decay over time they start to break up in strange and interesting ways."

While there are more than 200 waterfalls in the "UP," the biggest is just west of Sault Ste. Marie, on the east side of the UP, Lorenz said.

There's an upper and lower falls, so if you don't mind a bit of a climb start at the lower falls and hike to the upper falls, Lorenz said.

In the southern UP, near the edge of Lake Michigan, rests Big Spring. It's the biggest natural spring in the region, Lorenz said. Going out on the water involves rafts on cables.

"You go out there and you see this water gurgling up from the sandy bottom, you see these huge fish down there, these trees that have been at the bottom of this waterway for a very, very long time," he said. "The water there is so clean and fresh and it's, it's just unbelievable ... the light hits the water at just the right angles. It's like prisms. It's something I've never seen anywhere else."

Located within the Porcupine Mountains Wilderness State Park, Lake of the Clouds is one of Lorenz's favorite places for people to go, especially for those who have issues with accessibility.

"So often in these beautiful, vast, natural areas, it's hard to get to places if you have challenges getting around," Lorenz said. "One of the things I really like about it is that if you do have problems getting around, you can drive right up, almost to the edge of this beautiful picturesque area ... that's looking over the lake and then you can see this vast panorama of forest."

More than 100 lighthouses call Michigan home, Lorenz said. One of them to consider is the oldest active lighthouse on the Great Lakes. On the tip of Whitefish Point on the eastern side of the UP is the Great Lakes Shipwreck Museum.

The lighthouse, which was put into active service by President Abraham Lincoln, also houses collections honoring those who have died while on the "watery highways of the Great Lakes," Lorenz said. The space even has the bell from the SS Edmund Fitzgerald, which sunk in 1975.