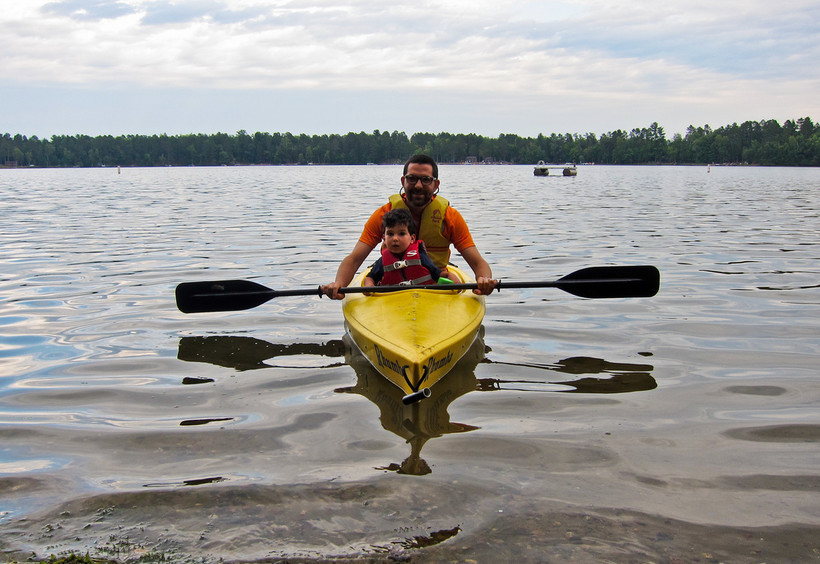 Looking For An Easy Source Of Summer Fun? Give Paddling A Try

With spring turning to summer, paddling enthusiasts are hitting rivers and lakes around Wisconsin for quality time on the water. According to one travel writer, it's a pastime that isn't just fun — it's also extremely accessible for novices.

Kevin Revolinski, author of a guidebook highlighting some of the best paddling routes in the state, said Friday that getting started in canoeing or kayaking is easy. For one thing, there are plenty of resources to turn to: Many outfitters teach classes on the different strokes involved, and there are also videos online.

"It’s not that complicated, especially if you’re not going out there and doing class 3 rapids and trying to go over waterfalls," he said.

Revolinski recommends renting before buying a boat, or going on a guided trip. But even purchasing a boat can be done at a reasonable cost: Many retailers sell models for only a few hundred dollars, he said.

"You don’t have to go whole hog and get the $3,000 deluxe hand-crafted wood canoe if you are just going out for a few times every summer," he said.

Paddlers also don’t necessarily need two vehicles if they’re going on an expedition without the help of an outfitter or shuttle to take them back to their starting point. Revolinski said he's used a bicycle for transportation in the past: He would drop the bike off at his end point, locking it to a tree, and then pull his boat with the bicycle back to his car at the end of the trip: "Paddling, and then peddling," he said.

In terms of safety, Revolinski recommends to always carry water and food. He also noted that the law requires boaters to carry floatation devices, either worn or inside the craft. The DNR will often patrol bigger rivers like the Wisconsin to strictly enforce this, he said.

"And they should be sticklers," said Revolinski. "Water is not forgiving."

For novices who decide to give paddling a try, Revolinski said the experience is a rewarding one. Far from being an extreme sport, he said, paddling is generally a relaxing way to see new sights. Not only does a boat allow paddlers to see wilderness not otherwise accessible, but it lets them get much closer to wildlife.

"We’ve had deer cross right in front of us, right through the river," Revolinski said.

He’s also seen otters on his trips, and many, many eagles.

"We’ve gotten up close to some of them eating fish on the shoreline," he said. "You just kind of float quietly past them, watching."

The many Wisconsin cities built on rivers can offer unique urban paddling experiences as well, Revolinski noted. For example, the Baraboo River in Baraboo features rapids. In Milwaukee, the Menominee, Kinnickinnic and Milwaukee rivers empty into Lake Michigan.

Revolinski said that many of the dams that used to block those Milwaukee rivers have been removed.

"You can paddle from the north side all the way through downtown," Revolinski said. "At some points you’re completely surrounded by green and you have no idea that you’re in Milwaukee — and then you come around the bend and there’s apartments and buildings — historic buildings — and breweries."

There’s even a bit of rapids on that stretch of river, he said, as it goes under a bridge.

"It’s quite a shock when you’re on this very lazy river through Milwaukee, and you come around the bend and you see that horizon line and you think, 'Wait, what's going on?' And you get there and it drops down under that bridge kind of quickly," he said.

He noted that the run is entirely safe, and "very exhilirating."