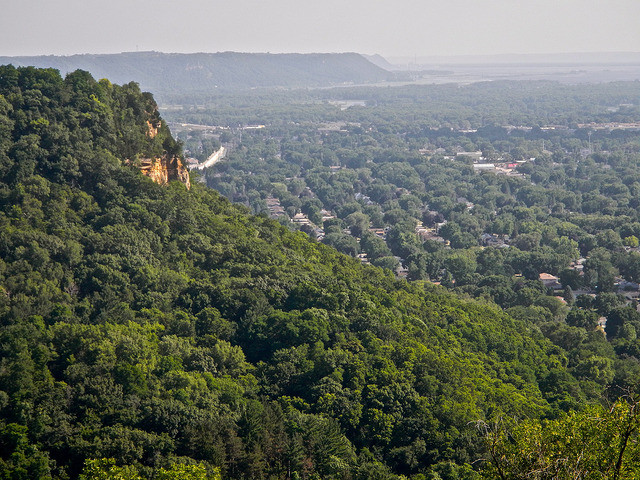 A group working to preserve the bluffs — one of the land formations that helps define the La Crosse area — is slowly gathering support for a plan that would protect the geology from future development and make the land more accessible to the public.

Two years ago, a master plan was created to implement a bluffland protection program that would run the entire length of La Crosse County and across the Mississippi River in Houston and Winona counties in Minnesota.

La Crosse County, which has taken the lead on the creation of the Blufflands Coalition, became the first to sign a memorandum of understanding earlier this summer. Since then, seven other governmental bodies and nonprofit groups have also signed the agreement.

"The plan is really to work together to leverage those resources that are out there," said La Crosse County planner Charlie Handy. "The more we work together, the more resources are available to us in the form of grants and other type of programs to help us to do preservation and also recreational programming in the blufflands."

There are an estimated 6,000-7,000 acres of blufflands to protect in La Crosse County. That includes 3,000 acres that are considered protected now.

Handy said it could take 25 years to develop a bluffland trail system that runs throughout La Crosse County.

"They’ll be open to the public," said Carol Abrahamzon, the executive director of the Mississippi Valley Conservancy. "We want them to be useful to all of the folks who want that connective trail across the blufflands, but also protecting the important habitat and the conservation values that are unique to the blufflands."

The Mississippi Valley Conservancy is a land trust that works with private landowners and governments in nine counties in southwestern Wisconsin on voluntary land conservation.

The long-range plan involves creating a trail system that can be used locally, but also be a draw for visitors.

"We want to make this a tourist destination. We have a lot of people coming to the area for a lot of different things, but with the natural resources that we have in such a very close proximity to each other, it just gives us more opportunity to work together," said Dan Wick, parks and recreation director for the city of Onalaska.

The Blufflands Coalition is receiving modest financial support from four municipalities now. It has allowed the coalition to hire a part-time coordinator. Handy is hoping more governments will sign the memorandum of understanding and commit to helping fund the effort this fall. He said the coalition is also receiving many volunteer hours and technical support from nonprofit groups like the Mississippi Valley Conservancy.

Handy said the Coalition is working now to protect two separate 100-acre parcels of blufflands in La Crosse County that would help connect land that is already protected.