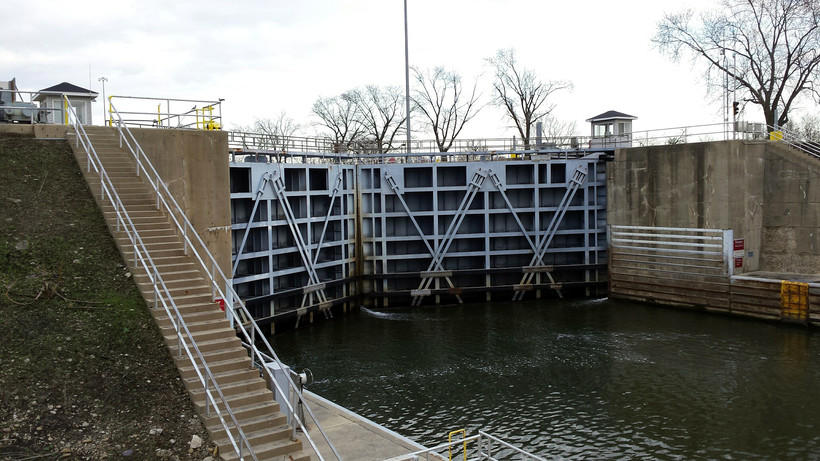 The Brandon Road Lock on the Des Plaines River in Illinois.

West of Chicago and near the city of Joliet, Ill., barges and other small vessels can bypass a dam on the Des Plaines River by using the Brandon Road Lock.

Vessels routinely enter the U.S. Army Corps of Engineers operated-lock through a gate. It's a process that takes about 30 minutes on the whole.

The lock could soon become more than just part of the area's shipping infrastructure: Environmentalists see it as a potential battleground in the effort to keep invasive Asian carp out of the Great Lakes.

Jennifer Caddick, of the Alliance for the Great Lakes, said the Brandon Road Lock is another "choke point" where changes could be made to make it harder for invasive species to ride in with barges and move between the Mississippi River and Great Lakes basins. Underwater electric barriers lie just 10 miles upstream in Romeoville, Ill., to prevent the spread of the carp, but according to Caddick, they aren't foolproof.

"There are some scenarios where fish, even when the barrier's on, can move through. So, this is a great opportunity to add on a few additional layers as the region sorts out the longer-term permanent solution to this problem," said Caddick.

Caddick said a bill currently before Congress could lead to the installation of seismic water guns below the lock to make it harder for the carp and other species to swim upstream. Other tools that utilize sound could also be used to deter the fish, and it's possible to flush clean water into the lock as barges pass as well.

None of these options win the endorsement of American Waterways Operators, the barge and tugboat owners trade group. Vice President Lynn Muench said that while she's open to the idea of more fish-control tools being installed around the lock, she worries about how boats would be able to move through the lock "effectively and efficiently" during the construction period. Lab technician Crysta Gantz, right, preparing to put a water sample in the centrifuge as part of the test of eDNA at a University of Notre Dame laboratory. Chuck Quirmbach/WPR

Muench said there's time to think about a solution — she contends the electric barriers and other controls have kept the carp in check.

Muench re-raises a controversy that's been simmering for a few years  about some of the science behind tracking Asian carp, specifically that the use of environmental DNA, or eDNA. Scientists test water for eDNA — genetic material that has been left behind in the environment — to determine whether a live fish has been in the area.

"We have a lot of concerns with how the (environmental) DNA has been used, because eDNA does not mean that there's a fish there," she said.

Not surprisingly, environmental DNA scientists defend the reliability of their findings.  At the University of Notre Dame, lab technician Crysta Gantz describes part of the process for finding eDNA in water samples.

“This is our centrifuge that pushes the stuff we don't want down to the bottom of the tube,” she said. “There are proteins and acids and things that weigh more, and we'll have they hopefully down at the bottom ... and then we'll have our DNA and liquid at the top," she said.

Professor David Lodge, who directs the University of Notre Dame's Environmental Change Initiative, said a positive carp eDNA test almost always means a live fish has been there — and not a dead one that's happened to ride in on a barge, for example.

"It's possible, but it's not a very probable explanation for the repeated patterns in space and time of the detections over several years now of silver carp," said Lodge, referring to a species of Asian carp.

Lodge also said researchers are getting better at expanding the number of species whose DNA can be tracked in water and figuring out the number of organisms that are there. Lodge hopes Congress keeps all invasives species in mind, not just Asian carp, when deciding how to keep the Mississippi and Great Lakes separate.

Next week, American Waterways Operators will likely have a stay-the-course message for lawmakers when the group holds its annual “Barge In” lobbying day in Washington, D.C.