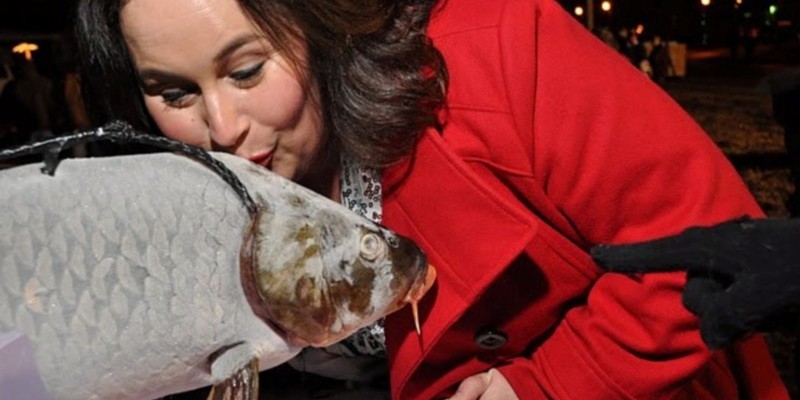 Prairie Du Chien Festival Is One Of Several To Kick Off New Year In Wisconsin
By Bill Martens
Share:

Only in Wisconsin can one celebrate the start of a new year by planting a kiss on a dead fish -- and that’s just one of several obscure ways to ring in 2015.

It’s the pinnacle of Prairie du Chien’s annual New Year’s celebration known as Carp Fest.  Since 2001, a locally-caught carp, weighing between 25 and 30 pounds, is frozen, then partially thawed and prepared for its big moment -- known as "the Droppin’ of the Carp."

The carp is nicknamed, “Lucky.”  After the drop, spectators can give Lucky a peck on the cheek and have their picture taken.

Elsewhere in Wisconsin, the city of Plymouth is making sure that the state's cheese culture is represented on Dec. 31.  The Sheboygan County city holds an annual “cheese drop” next door to the Plymouth Arts Center.

An 80-pound decorated wedge is descended from a ladder truck operated by the Plymouth Fire Department at midnight. Again, picture New York City.

“It’s like the dropping of the crystal ball in Times Square where I believe it’s supposed to hit bottom right at the end of the year, and of course, another cheesy year starts,” said Wisconsin travel columnist Gary Knowles Friday morning.

For something more traditional, people may want to consider traveling to La Crosse for the Skyrockers’ New Year’s Eve Fireworks at the Bluff.

The Skyrockers, a local nonprofit organization that performs fireworks and pyrotechnic shows, shoots from the top of Grandad Bluff at midnight, offering views from the University of Wisconsin-La Crosse and other areas.

For kids who can’t stay up until midnight, a preview show is slated to begin at 6 p.m.

Finally, it wouldn’t be a New Year’s in Wisconsin with a dip outdoors in icy cold water.  Several “polar bear plunges” are taking place around the state, including in Milwaukee, Madison, Sheboygan and Jacksonport.

Whatever activity floats your boat, be sure to bundle up.  The National Weather Service is forecasting lows in the single digits for much of the state on Wednesday night.