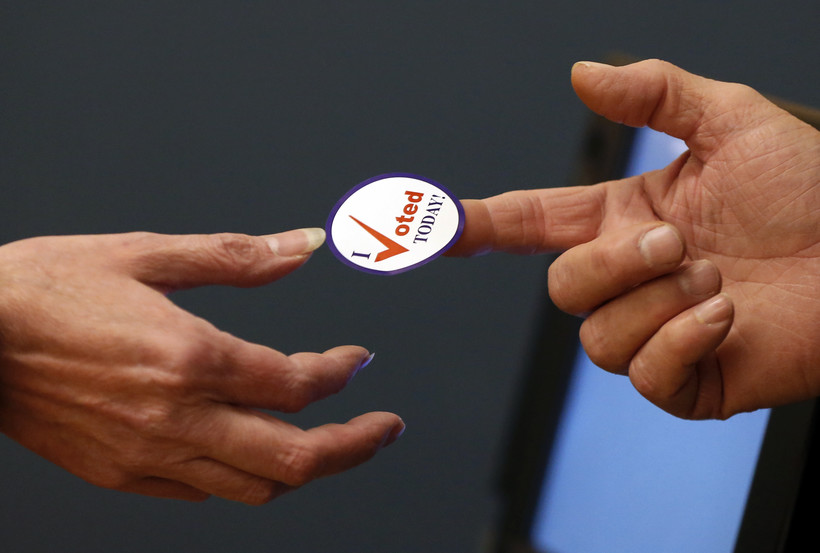 An election official hands an "I voted today" sticker to a woman after she cast her ballot in the mid-term election, Tuesday, Nov. 6, 2018, in Auburn, Maine. Robert F. Bukaty/AP Photo

Some election officials in Wisconsin say voter turnout in Tuesday’s election has been more like a presidential election year.

Dane County Clerk Scott McDonell said 50 percent of voters had cast their ballots as of 2 p.m. He said that's "exceptionally high," especially for a midterm election.

"People seemed to have wanted to vote early in the day," McDonell said. "I don't know whether they just wanted to get it out of the way or they've been waiting a long time to vote, but lines were a little long early in the day."

McDonell said it's unclear if turnout rates will remain at elevated levels for the rest of the day.

Elections Commission spokesman Reid Magney said turnout has been strong across the state.

"That may not necessarily include the absentee or early voter numbers which is 18 percent," Henry said.

Misprinted ballots were given to some voters in Marathon County this morning.

The first 54 voters in the Village of Stratford received ballots with the wrong legislative races on them. Village Clerk June Krueger said the municipality has around 875 registered voters.

Krueger said election officials were first alerted to the issue when the vote tabulating machine did not recognize the ballots. She said only part of the ballots given to the village were misprinted.

"The ballots that we had issued here absentee and early voting were correct," Krueger said.

Krueger said officials have contacted almost all of the affected voters and asked them to return to the polling location.

"Many of them have already returned to recast on the correct ballot and others have said they will be here before 8 p.m. tonight," Krueger said.

Magney said the Elections Commission has not heard of any other municipalities receiving misprinted ballots. He said if the affected voters in Stratford can't return to the polling place today, their votes will be counted toward everything but the legislative races.

"It is not uncommon for somebody around the state to have a problem either with misprinted ballots or for somebody to get a wrong ballot," Magney said.