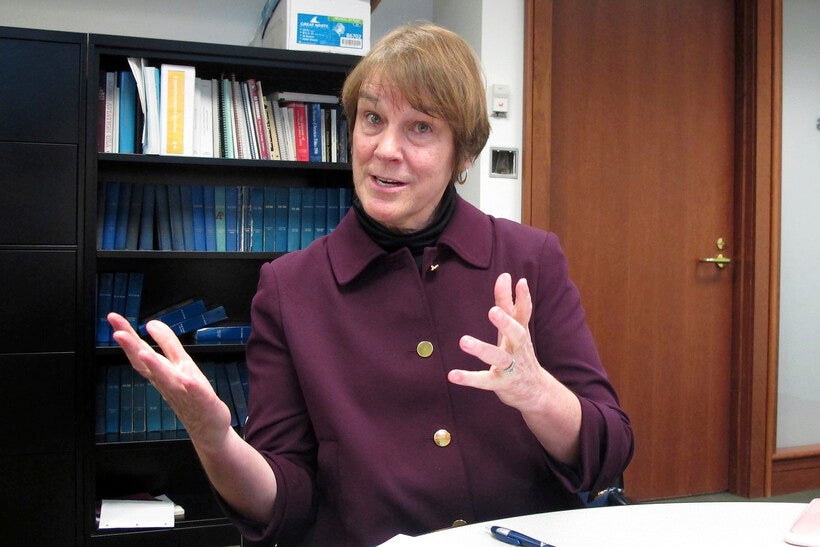 State Appeals Court Judge Lisa Neubauer has conceded the race for Wisconsin Supreme Court to Judge Brian Hagedorn a week after an election that left a razor-thin margin between the two.

Neubauer’s campaign released a statement Wednesday morning saying she had called Hag﻿edorn to concede and wish him luck.

Neubauer, the liberal-backed candidate in the officially nonpartisan contest, trailed by fewer than 6,000 votes based on unofficial totals gathered by the Associated Press on Election Night. She had been considering requesting a recount, but under state law, her campaign would have had to finance the effort.

The decision means Hagedorn, who had support from Republicans, is set to serve a 10-year term on the state’s highest court. His victory means conservatives will now have a 5-2 conservative majority as Hagedorn replaces retiring liberal Justice Shirley Abrahamson.

Democrats had been hoping a Neubauer victory would preserve the court's 4-3 conservative majority, setting the stage for a 2020 state Supreme Court race that could tip the ideological balance of the court.

Hagedorn, who also serves on the state Appeals Court, declared victory the morning after the election.

Neubauer herself ran a traditional judicial campaign, stressing her record as a judge on the court of appeals showed she was "fair, impartial and independent." She also touted endorsements from more than 340 judges around the state.

Those attacks focused on Hagedorn's record in Republican politics as well as his personal life.

Hagedorn was Gov. Scott Walker's first chief legal counsel, a job he held for more than five years before Walker appointed him to the Wisconsin Court of Appeals.

He was scrutinized for blog posts he wrote in 2005 suggesting a court ruling striking down an anti-sodomy law could open the door to legalized bestiality. Hagedorn's blog also called Planned Parenthood a "wicked organization" and disparaged the Mormon faith.

Hagedorn also came under fire from liberal groups for helping to found Augustine Academy, a Christian elementary school in Waukesha County whose code of conduct forbids teachers, parents or students from engaging in homosexual activity.

But Hagedorn framed the criticisms as attacks on his Christian faith, a rallying cry his campaign used to turn out the conservative base throughout Wisconsin.

After being outspent by liberals in the race's early going, Hagedorn benefited from a late $1.3 million ad buy from the Republican State Leadership Committee. The ads suggested the liberal groups backing Neubauer supported a socialist agenda of that was "soft on crime." They also urged conservatives who support President Donald Trump to vote for Hagedorn, suggesting that the attacks on Hagedorn mirrored attacks on U.S. Supreme Court Justice Brett Kavanaugh.

Neubauer referenced the ad buy in in her concession statement Wednesday.

"Hundreds of thousands of people voted for fair, impartial, and independent courts, and that’s why we had to ensure the vote count was accurate and observe the county canvass process, which has now been largely completed," Neubauer said. "I hope future races see less influence from outside special interests. With more than $1 million poured in against me with false and misleading attacks in the final week alone, it’s not hard to imagine that is what made the difference."

The bases for both parties came out for this race. Roughly 26 percent of eligible voters went to the polls, a number that is low compared to gubernatorial or presidential elections, but high for a Wisconsin Supreme Court race.

While she came up barely short, Neubauer received more votes in her race than Justice Rebecca Dallet did when she won a seat on the court for Democrats just a year earlier. Neubauer captured nearly 80 percent of the vote in Dane County where her margin over Hagedorn was more than 88,000 votes.

Hagedorn's margins grew in the conservative strongholds of Waukesha, Washington and Ozaukee counties, but he also flipped counties throughout Wisconsin that Dallet had won just a year ago.

Hagedorn's campaign released a letter to supporters Wednesday, saying he was humbled by the victory.

"As I prepare to assume the position of Justice of the Wisconsin Supreme Court, I know that this means you have called me to serve," Hagedorn said. "I love Wisconsin, and I will always remember that I am a servant of the law and the people of this great state."

Wisconsin's next Supreme Court race in 2020 will be the first election for Justice Daniel Kelly, a conservative Walker appointed to the court in 2016.

Already, Marquette University law professor Edward Fallone has announced he plans to run for the seat. Fallone ran unsuccessfully for the court in 2013.

Next year's election will be held on the same day as Wisconsin's presidential primary, which could potentially benefit Democrats. But Hagedorn's victory means that even if Democrats were to win in 2020, it could be 2023 before they'd have a chance to capture a majority on the court.