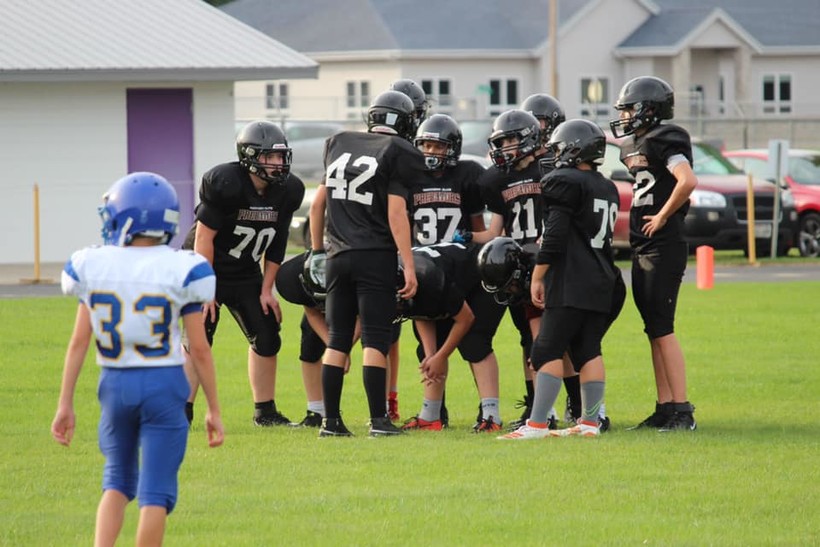 The Northern Elite Predators football team comprises players from the school districts of Niagara, Pembine and Goodman — one of 12 services and programs shared by at least two of four northeastern Wisconsin school districts. Photo courtesy of Ben Niehaus

With Limited Resources, School Districts Get More Out Of Working Together

Rural Districts In Northeastern Wisconsin Help Each Other, Save Money In The Process
By Elizabeth Dohms
Share:

As a school occupational therapist, Andrew Kangasa has a caseload of about 40 students, which is comparable to others in his position across the state. What's less common is that those students are scattered among four districts in far northeastern Wisconsin.

Kangasa's position requires him to travel between Florence, Niagara, Goodman-Armstrong Creek and Beecher-Dunbar-Pembine school districts to meet his students as part of an agreement between those four districts to share services.

That partnership for administrative services, athletics and programming has led to six-digit savings for the schools involved since they started collaborating in the 2014-15 school year, officials say, which supports efforts to provide services where the cost might otherwise be too prohibitive.

Collaboration for these districts is one workable solution toward more cost savings. A total of 12 shared services touch at least two of the districts. For example, a business manager services Florence and Niagara; all four schools share an occupational therapist; and speech and language services are shared by Florence and Goodman.

Kangasa knows the challenges of the arrangement. For one, he has multiple rooms to prepare each year for students. The calendars for each district don’t always line up, and there's the cost of getting to each school.

But the benefits are clear, too. Kangasa can share what he learns from all the teachers he works with in the different districts to figure out what new methods he might be able to use with his students.

He also plans trips with all his students to the bowling alley, an apple orchard or to the movies, which exposes them to students they wouldn’t otherwise meet.

On Wednesdays, Kangasa puts on about 100 miles traveling between the districts, which form a rough square in the far northeastern part of the state.

It might not be ideal for Kangasa, but it's still cheaper than each school district contracting out for an occupational therapist.

Some school districts do that through their CESAs, or Cooperative Educational Service Agencies — that provide programs, services and resources to districts within their coverage areas. There are 12 across the state with each district being assigned to one.

But districts such as Pembine are an hour-plus drive one way to the nearest CESA, and travel cost adds up quickly.

"We can pay several hundred dollars a day for mileage," said Ben Niehaus, the superintendent of Florence schools, about costs for contracting out those services. Florence is about a 45-minute drive to Pembine and the district enrolls a total of 392 students in 4K-12th grade.

With their current arrangement, the districts share those expenses and pay each other, depending on which district is the fiscal agent for that service.

Each of the 12 services has one fiscal agent, said shared business manager Shawna Lindow. The other districts who use that service pay the district that employs that service or position.

"We generate quite a bit of revenue from the others," Niehaus said. "You can say that in these conversations knowing at the end their budgets and taxpayers are winning because the expenditures are less than trying to do it on your own."

"We would not be where we are today in providing post-secondary credit attainment at the secondary level in our four schools without both NWTC and our collective efforts to work together," Niehaus said.

In addition to programming services, the districts share a driver’s education program. A football team stacked with students from three districts play home games at Niagara, practice at Pembine and spend homecoming at Goodman.

Ben Laarman, head coach of the Predators football team, said without the collaboration, there likely wouldn’t be a football team. Between the three districts, 38 students participate from grades nine to 12. That's pretty typical, Laarman said, pointing out that he’d feel a bit more comfortable if he had about 12 students from each grade.

"But we've never reached that," he said.

Apart from helping his team to victories, Laarman has the added pressure of bringing together a group of students steeped in competitive spirit against rival schools.

"The big thing you want in team sports is great togetherness, and when you have kids from different school districts that didn't grow up together, you have to work harder to do that," he said.

The Predators try to accomplish that by staying connected in the off-season, for example by going tubing and paintballing. The first step, though, is making sure everyone knows each other's names.

"That extends to the community, as well," he said. "I think there’s still hangers-on that don’t like the idea of the combined (team) and care about which school the quarterback came from, so you have to actively work in the community to promote the fact that we’re one Predators family."

On the surface, a simpler solution might be to just consolidate all four school districts into one. There was some talk of that in the 1980s, Niehaus said. But with a transportation budget of $400,000 for his district alone, distance between the districts is too far.

"The transportation cost would kill consolidation in districts like ours," Niehaus said.

More than that is the impact on the local economy, Niehaus argued. Rural schools enrich communities that are a big draw for tourism, and school districts are some of the largest employers in rural communities.

Policymakers who argue for creating one district "have no clue what's going on up here," he said.