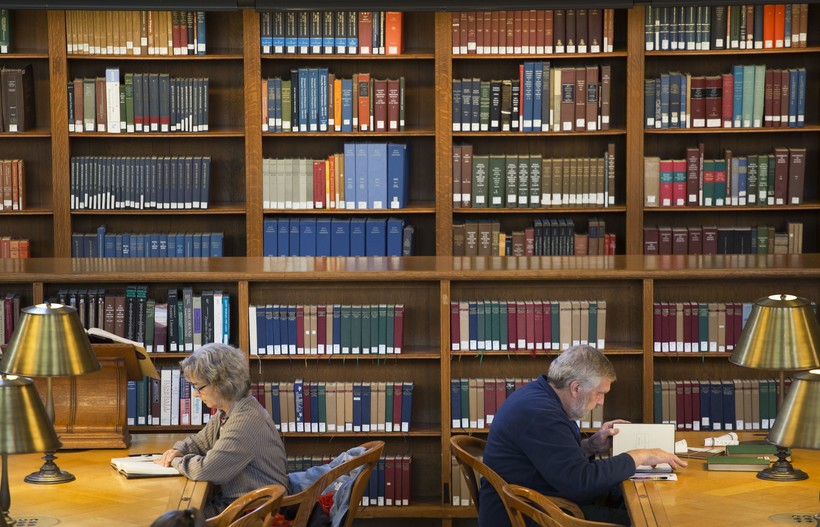 It turns out that if you write an op-ed arguing community libraries are obsolete and replaceable by private businesses like Starbucks, Netflix and Amazon, librarians will have a thing or two to say about it.

Their counterpoint: Public libraries have, in fact, evolved into social service providers that are accessible to most anyone.

When Forbes' published (and subsequently deleted) a column earlier this month, arguing that libraries are a taxpayer burden that can be outdone by the private sector in the digital age, it spurred a strong online backlash and evoked feverish support for librarians and the services their institutions provide.

Deb Baker, library director at Manchester Community College in New Hampshire, confronted the article with her own blog post to dispel the myth that libraries are harbingers of a bygone era catering to patrons who can't get books or meeting spaces anywhere else. And she argues those who don't use the library shouldn't dictate whether its services should be available to others.

"I was left wondering, as I usually am when I read articles like this, have any of these tone deaf, privileged writers set foot in a public library lately?" she wrote.

One of the arguments against libraries is that they're replaceable by the internet, but Baker said that's a baseless claim, in part because some of the libraries' patrons don't otherwise have access to internet. That can especially be a problem in rural areas, where access to the internet might be spotty at best.

A Pew Research study published in February found that two-thirds of Americans have access to high-speed internet at home, which could still mean that the library is one of the only ways that tens of millions of people have of accessing the internet.

"That's the beautiful thing about libraries is everyone can access them," Baker said. "So, it evens the playing field for people who can't afford to have broadband or live in a place ... where it's not as reliable."

Additionally, libraries offer more than the ability for patrons to check out books, Baker said, noting that services extend to helping people use computers, apply to jobs and get email addresses. Some libraries offer courses to cardholders to teach them skills that can set them up for new jobs. Some of those services can be accessed from home computers through the library websites, she said.

"We are filling those kinds of roles, and that adds a lot of value for community as well,"  said Baker.

Libraries also serve as physical places new residents can use to learn about their communities and participate in discussions, or as places where residents can cool down or heat up in extreme weather. Some libraries even provide snacks to hungry patrons through partnerships with local food banks.

For example, the Dodgeville Public Library in southwestern Wisconsin this year started providing bags of food to anyone in need through a partnership with a local food pantry. Staff assistant Carol Rademaker said the bags have been restocked several times this summer, noting there is a community need for it.

Librarians also answer numerous questions, often related to technology, which they record and submit to the Wisconsin Department of Public Instruction. In 2016, Dodgeville librarians recorded 6,960 reference transactions, according to the DPI report. Libraries that serve larger populations, such as Madison, reported almost 200,000 questions answered.

"All of those things are not typically measured when evaluating the value to taxpayers, but those are services that libraries are offering that aren't even traditionally part of the core mission," Baker said.

Additionally, Baker said searching shelves of books can foster discovery of books that patrons might not otherwise have picked up, especially if they had to pay for it.

"That serendipity of discovery is still very much alive and well in a public library and so important for kids who are developing their interests," she said.

Library cards can lend patrons services such as free downloadable media, adult and youth programs, tools such as sewing machines and access to computers, databases and reference assistance. A calculator developed by the Massachusetts Library Association lets users see the estimated costs of these services and products that a library card could be saving its patrons.

"Even if you live in a small rural town, you have access really to the world through your public library, and that's also a really essential service to people," Baker said.