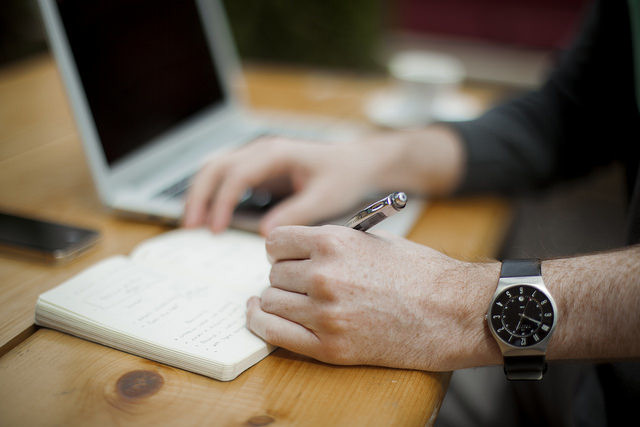 Janic Kaplan recommends writing in a "gratitude journal" every day.

Lessons From A Year Of Living Gratefully

Janice Kaplan hasn’t always been grateful. She admits that, like most people, she’s often so busy focusing on "what she wants that she forgets to be happy for what she has." And that despite the fact that she’d achieved success as a writer, television producer and magazine editor.

But, while overseeing a national survey for the John Templeton Foundation on attitudes toward gratitude, Kaplan noticed something interesting: While some 90 percent of people believed gratitude makes you happier and that almost 95 percent said they were deeply grateful for family and friends, less than half of them said they actually expressed their gratitude.

"I started to see that there was this huge gratitude gap," she said.

Kaplan wondered what would happen if she changed her own attitude and tried to express gratitude. So she set herself a goal: to spend a year living gratefully and see how it changed her life.

According to Kaplan that idea became a life-changing experience. "I ended up having the best year of my life," she says in her book, "The Gratitude Diaries."

Kaplan divided her year of living gratefully according to the seasons. In winter she focused on her home life — her husband and family. In spring, she focused on career and work, and then in summer, she moved on to exploring how gratitude can promote health and fitness. At the end of the year, she examined connections between practicing gratitude and creating a more generous society.

During that time, she conducted research about gratitude by talking to psychologists and neuroscientists.

"The number one character trait that seems to connect to wellbeing is gratitude," said Kaplan.

However, she added that gratitude is not just about saying "thank you" — rather, she said it's about "feeling something on a deeper level." She recommends starting a gratitude journal, and taking time every night to write down just one thing that inspired gratitude.

"Just knowing you’re going to do that will change your perspective on the entire day," she said.

Kaplan found that, when she thanked her husband for small things, their relationship changed completely. "At first it was awkward," she said. "But even just doing that changed the vibe in our relationship."

In the workplace, Kaplan added, appreciation becomes a powerful motivator.

"It doesn’t mean that life is suddenly going to be perfect or that great things are going to happen. It just means that you’re going to be able to change how you look at things," said Kaplan. "And I think that gives you a great sense of control over your own life."