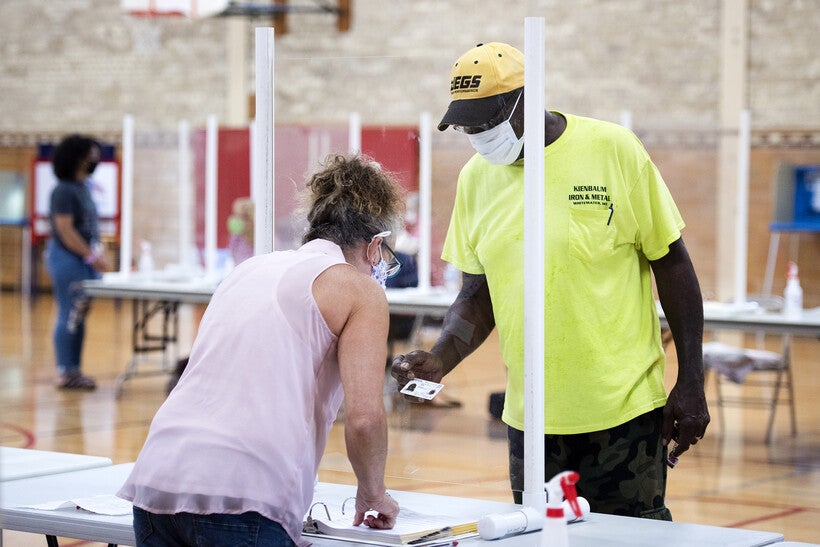 Voters are heading to the polls Tuesday for Wisconsin's second statewide election since the start of the COVID-19 pandemic.

There's no statewide race on the ballot Tuesday, but there are primaries with statewide implications.

Polls are open from 7 a.m. to 8 p.m. Tuesday. Voters can find out their polling places and what's on their ballot at myvote.wi.gov.

Here's a rundown of some of the races to watch:

In a handful of state Senate districts where incumbent lawmakers retired, voters are likely picking their replacements. In other, more competitive seats, they'll be picking candidates who could decide whether Republicans win a veto-proof majority in November.

One of the most competitive districts this November could be the 32nd Senate District in western Wisconsin. Three Democrats are vying to fill the Senate seat left vacant by former Sen. Jennifer Shilling, D-La Crosse, the Senate's former minority leader.

The winner will take on former state Sen. Dan Kapanke, R-La Crosse, who Shilling defeated in a 2011 recall election to win the seat. Kapanke lost to Shilling again in 2016 by just 56 votes.

Also retiring this year is longtime state Sen. Dave Hansen, D-Green Bay, who has held the 30th Senate District since 2000. Hansen regularly fended off Republican challenges even as Republican Donald Trump carried his district in 2016.

Democrats Sandra Ewald of Green Bay and Jonathon Hansen of De Pere, who is Dave Hansen's nephew, are facing off in Tuesday's primary. The winner will face Republican Eric Wimberger of Green Bay.

In the 10th Senate District, state Sen. Patty Schachtner, D-Somerset, will be defending her seat for the first time since winning it in a January 2018 special election. The win was widely viewed as an upset for Democrats in a suburban Minneapolis-St. Paul district that has traditionally backed Republicans.

In other districts that lean strongly Republican or Democratic, Tuesday's election could effectively decide the race.

They include Madison's 26th Senate District, where there's an opening for the first time in generations because of the retirement of state Sen. Fred Risser, the nation's longest serving legislator.

In the nearby 16th Senate District, a Democratic seat where state Sen. Mark Miller of Monona is retiring, there are two Democrats running: state Rep. Melissa Sargent of Madison and Andrew McKinney of Cottage Grove. The winner will face Republican Scott Barker of Sun Prairie in November.

And in the 28th Senate District in conservative southeast Wisconsin, where Big Bend Republican Dave Craig is stepping down, there are five Republicans on the primary ballot: Steve Bobowski of Franklin, Dan Griffin of Greendale, Jim Engstrand of Milwaukee, Julian Bradley of Franklin and Marina Kroft of Franklin. The winner of the heavily-Republican district will face Democrat Adam Murphy of Franklin in November.

In the 1st District, Democrats Josh Pade of Bristol and Roger Polack of Racine are competing in the primary for a chance to face Janesville Republican U.S. Rep. Bryan Steil in November.

Some of the lasting images of Wisconsin's April 7 election came from Milwaukee and Green Bay, where a shortage of poll workers and polling places led to long lines for voters. But both of those cities will have more voting locations this time around.

In Milwaukee, where just five polling places were open in April, Claire Woodall-Vogg, executive director of the city Election Commission, said there will be 168 polling places. The city says it has trained more than 700 new election inspectors.

According to the Wisconsin Elections Commission, Gov. Tony Evers' statewide face mask mandate requires all poll workers to wear face coverings. Voters are encouraged to wear a mask, but it's not required.

"We are asking voters to observe social distancing inside and outside of polling places, and not to create disturbances about the wearing or not wearing of masks or face coverings," said Meagan Wolfe, Wisconsin’s chief elections official in a statement.

As was the case in April, many voters won't vote at the polls Tuesday, casting absentee ballots instead. As of Monday morning, roughly a half-million voters had returned absentee ballots.

The Wisconsin National Guard is assisting at polling sites for today’s primary election, as it did for April's election.

The head of the guard, Major General Paul Knapp, told WPR's "The Morning Show" that there are nearly 700 service members working at the polls in 40 counties and 141 municipalities.

The Guard provided about 2,400 poll workers for Wisconsin’s April elections and presidential primary.