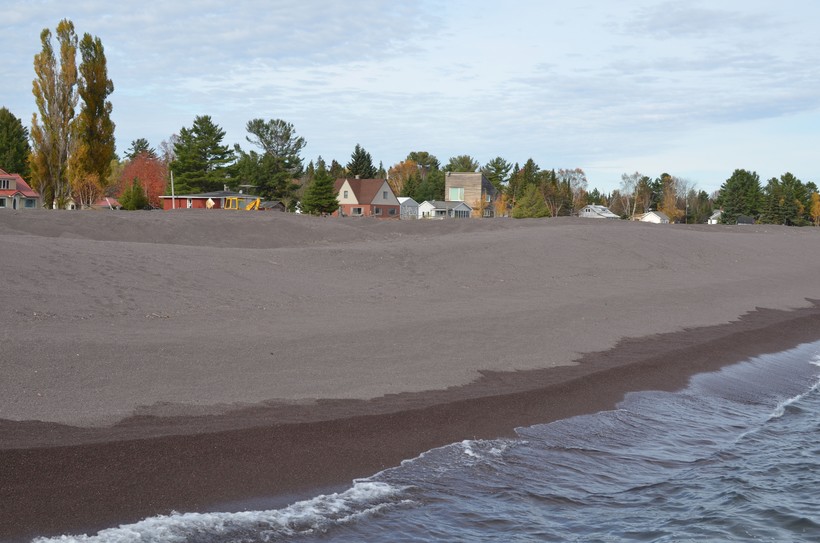 Stamp sands on the beach north of the Grand Traverse Harbor. Photo by the Michigan Department of Natural Resources.

A Mine That Shut Down 86 Years Ago Is Clogging One Of The Region's Most Important Reefs
By Mary Kate McCoy
Share:

The Keweenaw Peninsula in Michigan’s Upper Peninsula was home to more than 140 copper mines at the end of the 19th century. The copper is long gone, but the legacy of the mining boom has left a dark mark on the land: sediment that is slowly clogging an important reef in Lake Superior.

Millions of metric tons of waste left by Mohawk Mining, Co.’s stamp mill that closed down 86 years ago is eroding into Buffalo Reef on Keweenaw Peninsula’s eastern side. Originally as much as 23 million metric tons stood outside of the abandoned mill. Today wind and waves have diminished the waste pile down to just 2.4 million metric tons. 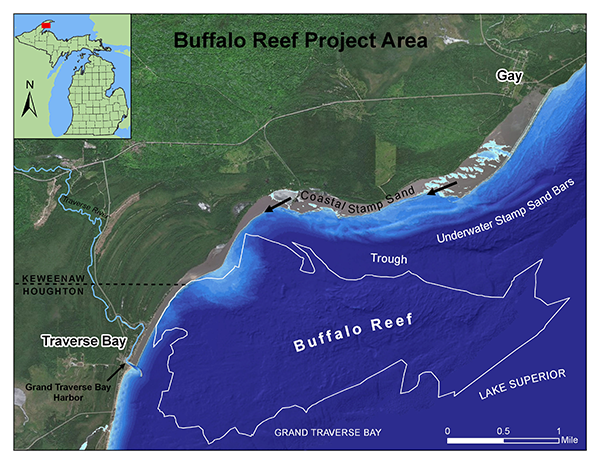 What used to be white sand beaches are now covered in black stamp sand in some locations along the 5-mile stretch from Gay, Michigan down to Grand Traverse Bay Harbor, said Philip Schneeberger, Lake Superior Basin coordinator and fisheries biologist for the Michigan Department of Natural Resources.

"In that hundred plus years it has traveled 5 miles down current," he said. "It has covered extensive beach areas, but more critically for the fisheries and biology of the lake it's covered about 1,300 acres of nearshore coastal habitat."

To extract copper from ore, large, steam-driven stamp mills would crush the rock which separated it from the copper, Schneeberger said.

"Only 1 percent of that ore body contains copper, so 99 percent is waste," he said. "And just huge quantities of this waste material piled up ... and is very critically covering a very important and productive reef ... that is very important to the tribal community and the rest of the community."

Close-up view of stamp sands deposited on the beach at Grand Traverse Harbor. Photo courtesy of the Michigan Department of Natural Resources.

Wetlands, streams and beaches in the area are hurting, but it’s Buffalo Reef that’s causing the most concern, Schneeberger said. As one of the most important spawning grounds for lake trout and whitefish, the damage from the stamp sands could be catastrophic for their populations.

"Not only the toxic properties ... but just physically, when those sands cover the rock they basically smother those spaces between the rocks where the fish would normally be laying eggs," Schneeberger said.

In 2016, a U.S. Army Corps of Engineers and Michigan Technological University survey found that 35 percent of the 2,200-acre reef was already covered with stamp sand. Schneeberger estimates that the entire reef could be covered in the next 50 years.

A large trough between the original waste pile and the reef has acted as a barrier and somewhat protected the reef over the years, but the stamp sand continues to creep into the reef, he said.

The Michigan DNR has dredged the area multiple times beginning in 2003, but that solution has proven to only buy time. Just last year a powerful storm undid the dredging efforts from earlier that same year.

Officials and community members are scrambling to come up with a solution to the problem, Schneeberger said. In 2017 a task force was formed to come up with options for dealing with the waste.

"The figure that's been thrown out there if we were to try to deal with the whole deposit, it would be in the neighborhood of $500 million," he said.

With that dollar figure in mind, Schneeberger said they are looking at a wide range of possibilities – all the way from doing nothing, to dredging everything or building a new reef that wouldn’t be affected by the stamp sands.

When asked if a new mine or processing plant in the region could have the same effect, Schneeberger said no.

"This is a legacy problem that is just from the past mining practices," he said. "We won't see this again."