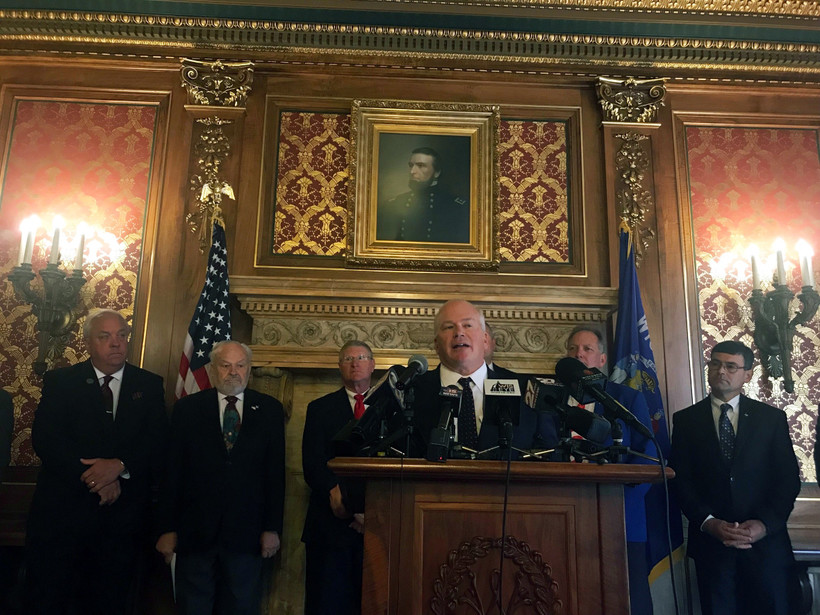 The Wisconsin state Senate passed a resolution to welcome new military jets to Truax Field in Madison on Tuesday, while local leaders and activists are trying to convince the U.S. Air Force to put the planes somewhere else.

Madison is one of the Air Force’s two preferred locations for the F-35s, newer jets to replace the current ones at Truax Field Air National Guard Base. Opponents argue noise from the jets would disrupt the neighborhoods around the Dane County Regional Airport, where the base is located, disproportionately affecting low-income communities and people of color.

The Air Force’s own environmental study states the noise would place 132 households in an area where "housing is incompatible."

Rep. Jon Plumer, R-Lodi, said at a press conference on Tuesday that he doesn’t think about the noise when Truax’s current jets, the F-16s, fly over his home.

"When I hear those planes come over, I don’t think about anything other than, I think, that’s freedom. I hear freedom going overhead," he said.

The Air Force has the final say in where the F-35s go. The resolution isn't a binding law, but a show of support that its authors say is important to the future of Truax Field.

The F-35s are necessary to keep the base alive, said Senate Majority Leader Scott Fitzgerald. He referenced the federal Base Realignment and Closure (BRAC) commissions that made about 1,200 base closures and realignments from 1988 to 2005.

"If we want those people to stay there, you’ve got to make sure that you can demonstrate to (the U.S. Department of Defense) that there is a need, and the need would be the F-35," Fitzgerald said. "It’s not about what’s going on in the sky when it comes to the F-35. It’s about what’s going on on the ground."

Rep. Tony Kurtz, R-Wonewoc, argued that F-35s at Truax will have military benefits as well as economic ones.

Madison’s proximity to Volk Field, part of Kurtz’s district that provides major training airspace for the U.S. military, makes Truax an ideal spot for the F-35s, he said.

"It’s not something the Air Force threw a dart at a map and said, 'We’re just going to put a unit here,'" said Kurtz. "It literally took years of dedication of the men and women of the Air National Guard to achieve this esteemed honor."

Noise isn’t the only concern when it comes to the F-35s. Some question their safety and reliability.

As of August 2018, the jets were performing below minimum targets for the average number of flight hours between maintenance, part removals, critical failures — or "failures that result in the loss of a capability to perform a mission-critical capability" — and the time it takes to correct them.

That’s according to a federal government report released last April that also detailed several specific failures. An F-35 crashed in September 2018 due to a faulty fuel tube, which led to an investigation that found the same problem in several other jets.

The report states the DOD is working to fix other technical problems outlined in previous reports.

Kurtz, a former U.S. Army attack helicopter pilot, did not express concern about the safety of the F-35s.

"These have been fielded. They’re working the bugs out. That is a normal process in military procurement," he said.