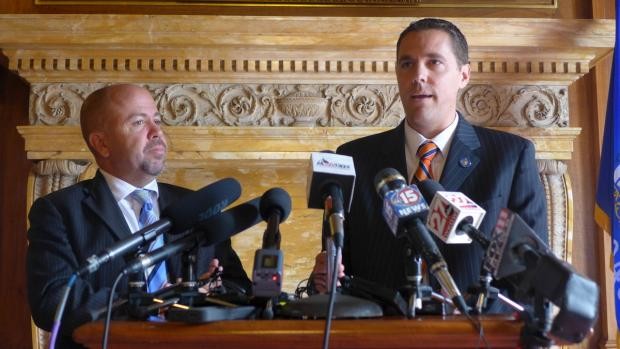 According to a Republican state lawmaker, if Wisconsin wants to have the best public workforce possible, its long-held civil service rules need changing.

State Sen. Roger Roth of Appleton and Assembly Majority Leader Jim Steineke of Kaukauna introduced a bill this week that would overhaul several key aspects of Wisconsin’s civil service system. Among the changes include defining "just cause" for immediately firing workers, shortening the appeals process for disciplined or fired employees, requiring yearly performance reviews of all state employees and setting aside $6 million for merit pay bonuses.

Roth said on Wednesday that now is the time to act because the state faces a large amount of turnover in 10 years.  He said that by 2025, about 40 percent of state employees will be eligible for retirement so the state must be better prepared to fill those potential vacancies.

"I’ve heard far too often from members of the agencies that it is too hard to hire people, the process is too long and that they’re losing good applicants along the way," Roth said.

He added that the ultimate goal of the proposals is to make it easier to attract and retain good workers -- without weakening the basis of the civil service system as established 110 years ago.

"The tenets that say you cannot be fired or suspended or docked in pay except for just cause, that is still in place. The statues that say you can’t get a job because of political affiliation … those stay in place," Roth said.  "So, nothing that we are doing changes the core of what our civil service system is."

One Wisconsin Now executive director Scot Ross blasted the plan, saying it would lead to "more cronyism, more corruption and more incompetence."  He said it would also pack state agencies with "partisan hacks" and people susceptible to partisan influence.

When asked how the changes would create more cronyism and corruption, Ross pointed to the resume screening process, which would replace the civil service exams, and would be entirely undertaken by the state Department of Administration.  There, Ross predicted applicants would be checked to see if they signed any of the petitions to recall Gov. Scott Walker or Republican lawmakers in 2011.  He also said that if workers want a raise, they would need to tow the party line rather than do what’s best for taxpayers, and that if Republicans don’t approve of an employee for some reason, they would have an easier time firing that person.

Roth said that the safeguards against political patronage would go unchanged under his bill.  The DOA’s Division of Personnel Management would continue to oversee job applicants’ materials, but instead of reviewing inventory questionnaire exams that Roth said can be easily fibbed, it would look over resumes that contain actual work experience.  He maintained the change would help ensure that only qualified individuals would be granted interviews.  He cited an example of a short-order cook getting an interview for an accountant position based on the applicant’s civil service exam.

"We can simplify that process and shorten up that hiring timeline by getting rid of this archaic exam process and we can do so without leading to political patronage that Scot’s worried about," he said.

Ross dismissed Roth’s examples as "anecdotal nonsense."  He said Republicans have repeatedly tried to consolidate power in state government through various means, including changing Wisconsin’s John Doe investigation laws, gutting the Government Accountability Board and attempting to do away with the state’s open records laws.  He also said that 60 percent of loans made by the Wisconsin Economic Development Corporation have gone to Walker donors.

"Sen. Roth, when folks like me are saying, ‘Wait a second, these, you know, couple of examples that you show do not warrant an overhaul of state government that would put more cronyism, corruption and incompetence into state government,’ -- I think that it’s your track record that has us skeptical," Ross said.

Editor's Note: "The Big Question” can be heard each Wednesday at 7 a.m. on the Ideas Network of Wisconsin Public Radio.