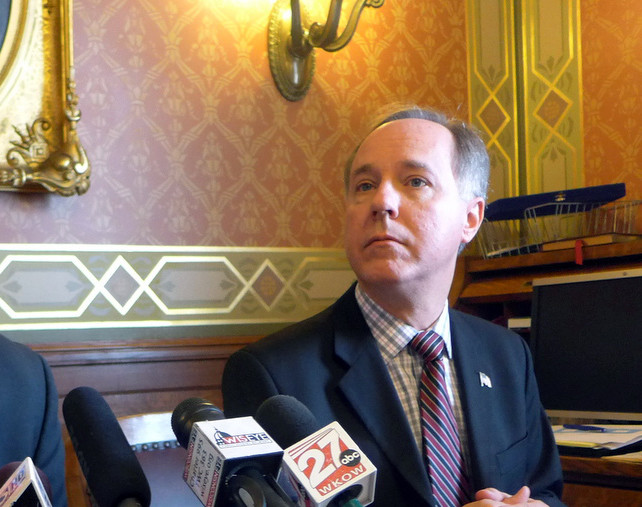 Speaker Robin Vos at a press conference prior to the Assembly's marathon floor session.

The Assembly Had Another Late-Night Session — Here's What Passed

The state Assembly wrapped up its last scheduled session day of 2016 early on Friday morning, passing a wide range of bills including one to deregulate high-capacity wells and another that would ban state funding for a streetcar in Milwaukee.

Here's a rundown of some of the bills they passed:

After earlier sending signals that the issue was dead this legislative session, Republicans passed a high-capacity well bill last night that was pushed by agriculture and business groups. It would let existing high-capacity well owners rebuild or replace their wells without a permit and transfer the permits to future owners. It would also call for a study of several Central Sands watersheds.

In an unusual twist, Nekoosa Republican Rep. Scott Krug— who represents parts of the Central Sands region — helped write the bill, voted for it in committee, then voted against it on the floor. The bill heads next to the Senate.

In yet another example of the great divide between Democrats and Republicans when it comes to rail funding, GOP lawmakers passed a bill that would bar the state of Wisconsin or Milwaukee County from paying for a streetcar in downtown Milwaukee.

Lawmakers voted to give Milwaukee County more power to collect debt, a move that will help it finance its share of a new stadium for the Milwaukee Bucks. Lawmakers from both parties voted for and against.

A bill now headed to the governor's desk would let police conduct strip searches on suspects who are being detained, regardless of whether they're being charged with a misdemeanor or a felony. It would undo part of a law passed last session that makes police wait 12 hours before conducting a strip search.

Lawmakers from both parties voted for a package of bills aimed at treating and researching Alzheimer's and dementia, including a plan that would boost funding for respite care. Lawmakers also passed a series of mental health bills. Both packages still need Senate approval.

A bill aimed at Winnebago County Executive Mark Harris is now on its way to Gov. Scott Walker's desk. It would prohibit county executives from serving concurrently as state legislators. Harris is running as a Democrat for the Senate seat being left open by outgoing Republican Sen. Rick Gudex.

"The Senate majority leader, he openly said this one is about politics."

Assembly Speaker Robin Vos spoke in support of the bill, pointing out that county sheriffs are banned from holding office as state lawmakers.

"Double-dipping is wrong," Vos said. "Take one job and be happy with it."

While the plan was a priority for Senate Republicans, seven Assembly Republicans voted against it, with one GOP lawmaker tweeting "#PettyPolitics" afterwards.

State agencies would always have to be planning for the worst under a plan now headed to the governor's desk. In addition to the regular budget requests they submit every two years, they'd also have to submit two alternative budgets: one that would hold their funding flat and another that would cut it by 5 percent.

The Assembly gave final OK to a significantly scaled-back bill that would rewrite lake and wetland laws. The version the Assembly approved earlier this month would have made it much easier for landowners to dredge an adjacent lake, but the Senate removed that provision among many others. The bill now heads to the governor's desk.

Under a bill now headed to the governor's desk, landowners could still receive a state tax break for logging, even after they close off more of their property to the public.

The Legislature would have more veto power over the state's arcane, but important rulemaking process under a bill now headed to the Senate. It would require administrative rules — which are written by the executive branch — to be passed by the full Legislature if their cost hits $10 million.

Public schools would have less ability to raise property taxes to make up for students who attend private voucher schools under an amended bill that passed the Assembly.

It goes back to the Senate, which returns to Madison in March.