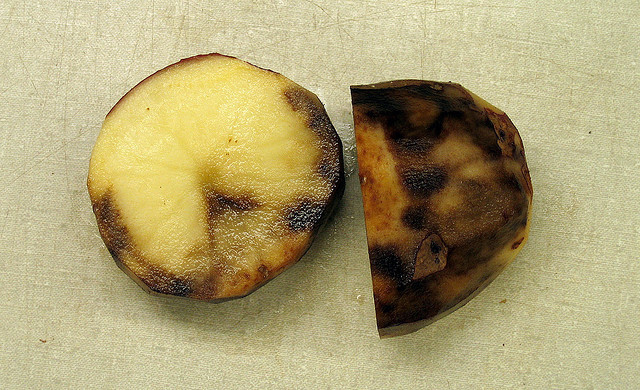 There has been confirmation of late blight in the central part of the state, according to Kevin Schoessow, an agricultural development agent for the University of Wisconsin-Extension.

The plant disease, caused by a pathogen known as phytophthora infestans, affects both potatoes and tomatoes, causing discoloration and eventually death of the plants' tissue. The disease is perhaps best-known for causing the Irish potato famine back in the 1800s.

Schoessow said the disease is one to keep an eye on, given that Wisconsin has a substantial commercial potato industry.

"Wisconsin is third in the nation behind Idaho and Washington state in potato production," Schoessow said.

The spores of this fungus spread quite readily, which is why Schoessow recommends destroying the entire plant once the disease is found.

"If we get this in our commercial potato fields, or even if you’re a market gardener and you have a substantial amount of potatoes or tomatoes, late blight is really a tough disease to manage," Schoessow said.

To completely get rid of the plant, it needs to be completely uprooted, placed in a plastic bag, and then undergo a process called "solarization." Soil solarization is a nonchemical method that kills soilborne pests using high temperatures captured from the sun, according to the Agriculture and Natural Resources Department of the University of California.

After solarization, the plant should be disposed of.

The signs to look for are different from typical blights found on tomatoes. Schoessow said with early blight, the leaves get lesions that have yellowing or halos around a dead spot on the tissue. With late blight, he said the signs are very different.

"You get these kind of olive, brown to black, water-soaked, kind of oily areas on the leaves, and it causes the whole tissue to collapse and eventually the whole plant almost melts away," Schoessow said.

To determine if plants have late blight, samples can be sent to the Plant Disease Diagnostics Clinic at the University of Wisconsin-Madison.

"Just mention late blight analysis on those samples and they’ll do it for no charge," Schoessow said.