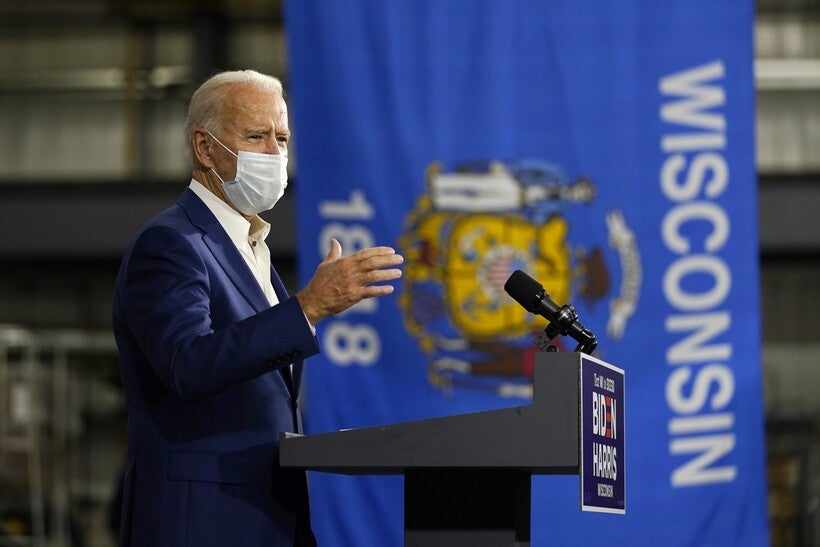 Forty-eight percent of those surveyed said they support Biden, compared to 43 percent for Trump. Two percent of voters said they plan to support Libertarian candidate Jo Jorgensen, and 8 percent said they are still undecided, plan to vote for a candidate not named in the poll, or refused to answer.

The previous Marquette poll, released earlier this month, showed Biden leading Trump by 5 points among likely voters, 46 percent to 41 percent. Another 4 percent said they would vote for Jorgensen, and 8 percent said they were undecided, planned to vote for another candidate, or refused to answer.

Charles Franklin, director of the poll, pointed out Biden has led every Marquette poll since May by between 4 and 6 points.

"I’d say the most striking thing this year is how little things have changed despite a cacophony of events," Franklin said. "That is much more stability than we saw in 2016."

Undecided and third-party voters played a key role in the final polls of the 2016 presidential election, showing a lead for Hillary Clinton over Trump.

The final Marquette poll in 2016 showed Clinton leading Trump by 6 points among likely voters in Wisconsin, 46 percent to 40 percent, with 4 percent saying they planned to support Libertarian candidate Gary Johnson, 3 percent for Green Party candidate Jill Stein, and 7 percent who said they were undecided, planned to vote for a candidate who wasn’t named, or refused to answer.

Ultimately, Trump won 47 percent of the vote in Wisconsin compared to Clinton’s 46 percent. The majority of undecided voters shifted to Trump, and some who said they planned to support third-party candidates shifted their support to Trump as well. Johnson ended up winning 4 percent of the vote and Stein earned 1 percent.

Another statewide poll, released Monday by the Elections Research Center at the University of Wisconsin-Madison, showed Biden leading Trump by 9 points among likely voters in Wisconsin, with 3 percent of voters saying they were planning to support another candidate or were undecided. The margin of error on that poll was 4.1 percent, which means Biden’s lead was slightly outside the margin of error.