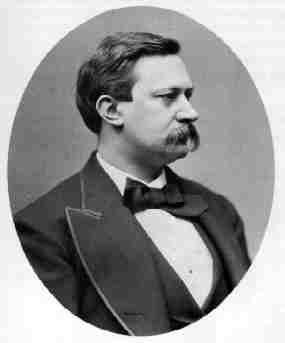 Conductor Theodore Thomas wielded the baton over a massive music festival that took place in New York in May 1880, and the size of the ensemble required him to be alert with his eyes as well as his ears.

The Philharmonic Orchestra was the largest, and in his opinion, the best orchestral organization the country had ever heard. Their efforts for the year culminated in a five-day collaboration with seven choruses from New York and six other metropolitan areas--for a combined total of three thousand singers.

There were upwards of three hundred instrumentalists, all of whom had been members of Thomas’ orchestra in previous years. It was a grand reunion of players who had performed together over the past twenty years or so.

The monster ensemble made it necessary for Thomas to keep track of a lot of instruments and voices, and during one rehearsal Thomas impressed everyone with his perceptiveness.

They were playing Wotan’s Farewell from Wagner’s Die Walküre. There were thirty-six cellists and the last stand was about eighty feet from the conductor’s desk. Thomas was aware that a passage in the cello part began in the bass clef and continued in the tenor clef, and he knew that cellists would sometimes miss the transition and continue playing in the bass clef. When they came to the passage in question, Thomas heard the predictable oversight, stepped quickly to a last stand cellist, and pointed out the mistake.

The orchestra members were amazed that Thomas could tell which of the thirty-six had made the mistake. Over the years, the incident was reported far and wide with increasing inaccuracy.

Years later, in his autobiography, Thomas set the record straight with a simple explanation.

Being familiar with the mistake, when he heard it, he glanced at the cellists and saw that one of them still had his hand in the bass clef position, and that visual cue had enabled him to single out the erring player so quickly.