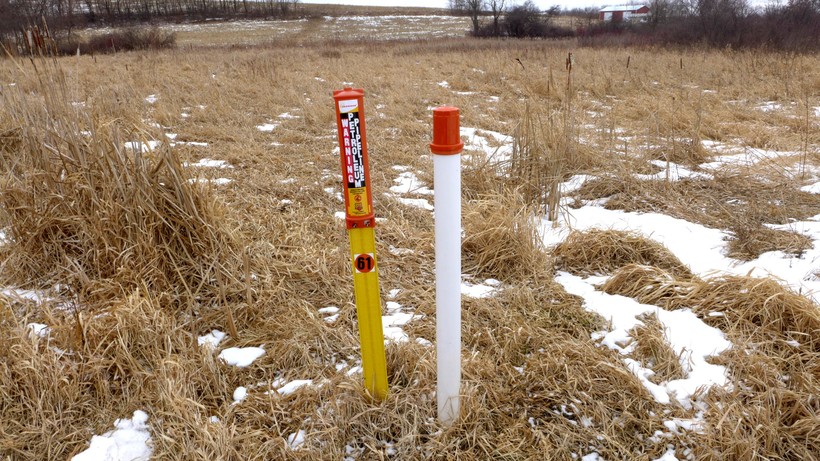 A marker showing where the existing Line 61 pipeline crosses underneath a Dane County wetland.

Lawsuit Is Trying To Get Company To Buy Special Insurance
By Danielle Kaeding
Share:

Several landowners in Dane County are suing a Canadian energy firm to force the company to obtain special insurance for a nearby pipeline.

A Dane County zoning committee asked Enbridge Energy to carry $25 million in environmental impairment liability insurance last April as part of a conditional use permit. Enbridge officials were seeking a permit to build a pump station for its Line 61 pipeline, which tripled capacity up to 1.2 million barrels of oil per day from Superior to the Illinois border.

Waterloo landowner Tim Jensen is one of seven named in the lawsuit. Jensen lives less than a quarter mile from the pump station that Enbridge built. He said he wants Enbridge to be a good neighbor and agree to hold the special insurance.

"And, if something happens, to help me replace the losses I’m going to experience," said Jensen.

The complaint requests an injunctive relief to enforce the conditional use permit issued to Enbridge last April "and compel compliance with Condition 7 of the Conditional Use Permit. That provision conditions the County’s zoning permit for operation of the Waterloo Pumping Station, which includes Enbridge’s Southern Access Pipeline 61 through Dane County...upon…the purchase of $25 million of Environmental Impairment Liability Insurance."

But state lawmakers inserted a last-minute provision in the budget last summer to prevent towns and counties from requiring such insurance.

Environmental group 350 Madison issued a press release on Monday, saying the county’s efforts to protect citizens have been "steamrolled by the Canadian behemoth."

"That gut punch to the integrity of our political institutions occurred in the dark of night when the company, or someone acting on its behalf, lobbied key legislators to include an 11th hour budget amendment that sought to override the county's insurance requirement," said 350 Madison spokesman Ben Peterson in a release. "Fortunately, the lobbyists involved were in such a hurry to avoid public scrutiny of their actions that the language they inserted failed to address a key point. Even though the bill prevents the county from enforcing its zoning requirements, concerned citizens are still able to protect themselves by demanding the enforcement of the zoning regulations."

Enbridge officials have said their $860 million comprehensive liability coverage, which includes sudden and accidental pollution liability insurance, is enough to cover any potential spills. However, the company sued insurers after one carrier disputed whether Enbridge could recover costs related to its claim on the Kalamazoo River Spill, which released 843,000 gallons of oil from its Line 6B. The spill has cost the company around $1.2 billion. Enbridge is currently in binding arbitration with the insurance carrier to resolve the matter.

Jensen said he isn't convinced Enbridge’s coverage will be sufficient to protect him or other landowners.

"Especially with oil prices going down and them not having the funds to do all this cleanup work that they claim that they will be doing if they do have a spill," he said. "They’re just not going to have the money there if there’s no money in oil anymore."

However, Enbridge officials have maintained the company is in good financial standing. A spokeswoman said on Tuesday that they were aware a complaint had been filed by landowners along the Line 61 route.

"However, we have not yet received the complaint," said Jennifer Smith, stakeholder relations manager for Enbridge’s U.S. Public Affairs team. "When served, we will review the complaint, respond accordingly, and comment if appropriate."