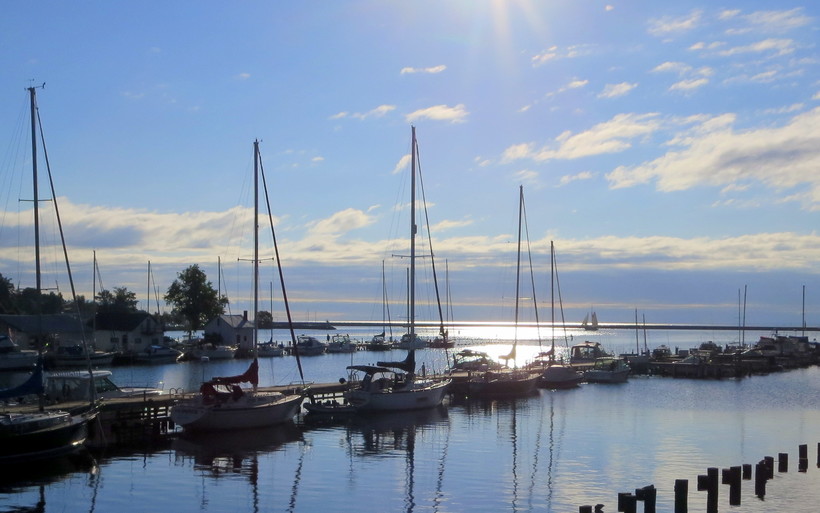 Researchers say even Lake Superior, the largest lake connected to the state, is feeling the effects of climate change.

Swimming in Lake Superior has never been easy without a wetsuit, but if you're going in with just a swimsuit late August is usually one of the best times. On a hot day near Marquette, Mich. last weekend, three college students jumped off what are called the Black Rocks and into the relatively cool water. Even a visiting journalist took the plunge.

As refreshing as a brief swim in the big lake might be, scientists and advocates say there appear to be trouble signs for the waters. In some of the last few years Lake Superior's average daily temperatures in August have been around 70 degrees, well above 30-year averages.

Last year, Marquette had its first ever beach closure tied to E. coli bacteria, which is often linked to warmer lake temperatures. Winter ice cover is also down.

Geraldine Grant of the Superior Watershed Partnership says all of the changes are worrisome. "I think at first I thought I might have to move farther north, because Lake Superior felt like bathwater for the first time ever in my life - and I grew up here."

But Grant and her colleagues at the partnership are still in Marquette monitoring water quality and working with communities around Lake Superior to make changes that may reduce the impact of global warming. The group's executive director, Carl Lindquist, says it's sometimes just a case of re-classifying what the cities are doing.

Others worried about what climate change may be doing to fish populations in Lake Superior are changing their fish stocking policies.

In the Keweenaw Bay Indian Community, there are dozens of small brook trout swimming in the tanks. The tank water system has been altered due to climate-fueled changes in local water supplies. The tribe has also added ponds for rearing walleye. Under climate change, at least near the Keweenaw Peninsula, walleye may do better than trout in the big lake.

Hatchery manager Evelyn Ravindran says that may not make a difference to some anglers, but a reduced trout population would be a cultural and economic loss for the tribe.

"I think it would be pretty devastating," she says. "People have their traditional fishing ground. Bringing your children out to those grounds where you grew up fishing - those are very strong traditions that I think people would be hurt to see disappear.'"

The waters of Lake Superior may still be beautiful, and the winds a familiar feel. But scientists say carbon pollution and other things happening away from the lake will continue to alter what's living under the surface and how people use the water.