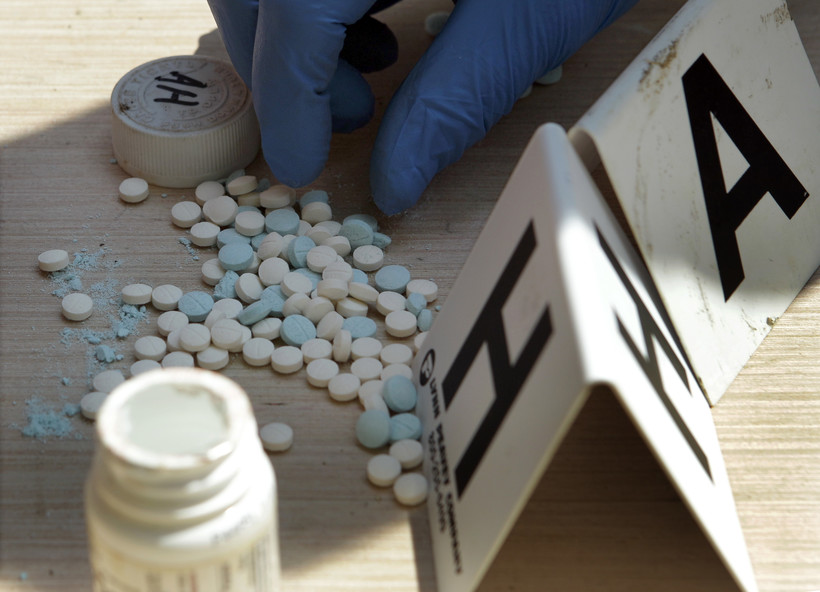 In this 2010 file photo, a police officer counts pills containing pseudoephedrine during a raid of a suspected meth house in Gerald, Missouri. Jeff Roberson/AP Photo

The tribe convinced the leaders of Iron, Oneida and Vilas counties to form an eight-member committee to try to find solutions to the problem of heroin, methamphetamine and other hard drugs plaguing the region.

George Thompson, one of two Lac Du Flambeau representatives on the Tri-County/Tribal Controlled Substance Response Committee, said the volume of drug cases is overwhelming courts in the region.

"We want to see an impact on the drugs that are hurting all our people, not just Lac Du Flambeau, but every county, the entire state, the entire country," Thompson said. "We're particularly tired of it."

Oneida County Sheriff Grady Hartman, a member of the committee, said drug use is also fueling an increase in other crimes.

"The tribe especially has been hit hard. Our county has been hit hard," Hartman said. "When you're dealing with heroin and methamphetamine and heavy pill use and those types of things, you get all the other crimes and behaviors associated with that."

Committee members want to hire an assistant district attorney to work as a special drug prosecutor, solely focusing on hard drugs. The prosecutor would report to the three counties and the tribe.

"We decided early on that we wanted to be a committee of action, not just talking about it," Hartman said. "We can make an impact right now on the problem, not something that's going to come five or 10 years from now."

"The district attorneys are state employees, not county employees," Fried said. "We may also need a memorandum of understanding between the counties and a funding resolution."

"Until the check is written, you really don't know if you have that commitment because there are so many challenges with your budget," Fried cautioned.

Hartman said the district attorneys for the three counties all support the idea.

"Obviously the district attorney has the jurisdiction to prosecute the crimes in their individual counties as he or she sees fit. All three of them were on board," Hartman said.

Fried said that despite the seriousness of the problem, there has not been a statistical analysis documenting drug use and related crime in the region. At the committee's most recent meeting on July 16, members gave themselves the task of compiling that data.

Across the state of Wisconsin, the proportion of drug deaths involving heroin increased from 5 percent in 2006 to 33 percent in 2014. The number of criminal cases involving methamphetamine possession and distribution increased 167 percent between 2011 and 2015.

The collaboration between the four governments has attracted the interest of state and federal officials. At a recent committee meeting at the Lac Du Flambeau headquarters, representatives from the state DOJ, the FBI and the U.S. Marshals Service joined the county and tribal leaders, Thompson said.

"We invited everyone we possibly could to the table," Thompson said.

"They're looking for answers too. They're hoping that we may be able to create a model that would be useful not only in the state, but maybe federally," Fried said. "Four heads are better than one."