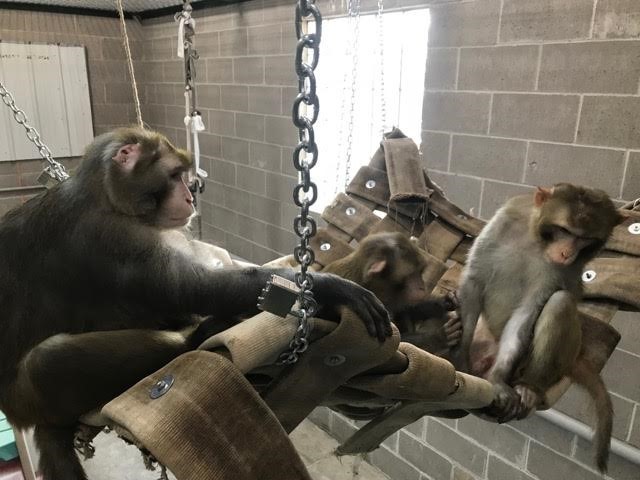 A trio was formed at the Primates Incorporated sanctuary between Timon, left, Batman and River. Photo: Courtesy of Breanna Cyr, primate behavioral specialist.

Amy Kerwin grew close to the 97 rhesus monkeys she worked with while employed in a laboratory at the University of Wisconsin-Madison's Harlow Center for Biological Psychology.

But when the study concluded, those monkeys, who can live to 40 years old in captivity, weren't used for new research there. Kerwin suspects they were either sold or euthanized.

Some labs retire animals into sanctuaries, but there aren't many places to put them. In the United States, there are currently nine sanctuaries, and one of them was started by Kerwin herself after she left her position at the lab.

Kerwin founded Primates Incorporated in 2004 as a nonprofit retirement sanctuary for former lab monkeys in honor of the 97 she once worked with. But it took years of fundraising and mobilizing volunteers to break ground in 2016 for a sanctuary in Westfield, about 65 miles from Madison.

Three monkeys were relocated to the sanctuary in January and another two monkeys made it their home in May.

The five "old world" rhesus macaques — a type often used in research — living at the sanctuary moved in before the completion of the first building. That's expected to be done in the spring and comes at a cost of $300,000. Kerwin said four more indoor-outdoor complexes are planned to be built over the next 10 years, so long as funds are secured. Pictured is the Indoor/outdoor plan featuring geodesic domes so the monkeys will have greenhouses to enter during the wintertime. Photo courtesy of Breanna Cyr, primate behavioral specialist.

Kerwin said she had to turn away 18 monkeys so far because of space constraints. She's hoping that will change once all the buildings are completed, which according to plans will provide space for 100 monkeys.

Monkeys at Primates Incorporated will have two enclosures to travel between all year long. Geodesic domes that will feature vegetation during the winter months will be connected by walkways to indoor housing areas that the monkeys can travel in between. Outdoor enclosures will be accessible during the summer months. Izzle, a 14-year-old rhesus macaque, likes to use his mirror at the Primates Incorporated sanctuary. Photo courtesy of Breanne Cyr, primate behavioral specialist.

In labs, rhesus monkeys must be provided with an area that's at least 4.3 square feet and 2.5 feet high, Kerwin said of guidelines that dictate how the animals are cared for. They're weaned from their mothers after six months, put into groups and then into pairs.

"There is an attempt to socialize them and give them enrichment while they are in their minimum guidelines, but I always felt as a researcher that these minimum guidelines are inadequate for these intelligent beings," she said, noting that some animals exhibit abnormalities such as finger biting, back-flipping and pacing as their ways of adjusting to their environments.

Kerwin said only 10 visitors will be allowed on the campus each week to reduce stress and surprises for the monkeys. In fact, Kerwin said the caregivers are held to a strict routine so the animals know what to expect. The only exception is when animals are surprised with enrichments — stimuli that are given to them as presents that they can tear open.

There are about 110,000 monkeys living in labs across the U.S., Kerwin said, and many are at universities and testing firms. According to the U.S. Department of Agriculture's most current data, 8,946 nonhuman primates were used in research in Wisconsin in 2016.

"They're tested on us for the private industry and also federal grants for a variety of reasons because they are so close to us genetically," she said.

Some labs continue testing on monkeys throughout their lives. In addition to being resold or euthanized, monkeys might also be kept on as breeders.

"At Primates Incorporated, we just say when the opportunity exists, the very least we can do is be giving back to these monkeys when possible," she said.

Kerwin said she hopes her sanctuary can be used as a model for other states looking to build similar structures.

"We're willing to share our knowledge and expertise with anyone who wants to set up a primate sanctuary so that one can be set up in any state and so no monkeys are ever turned away from retirement every again" she said.