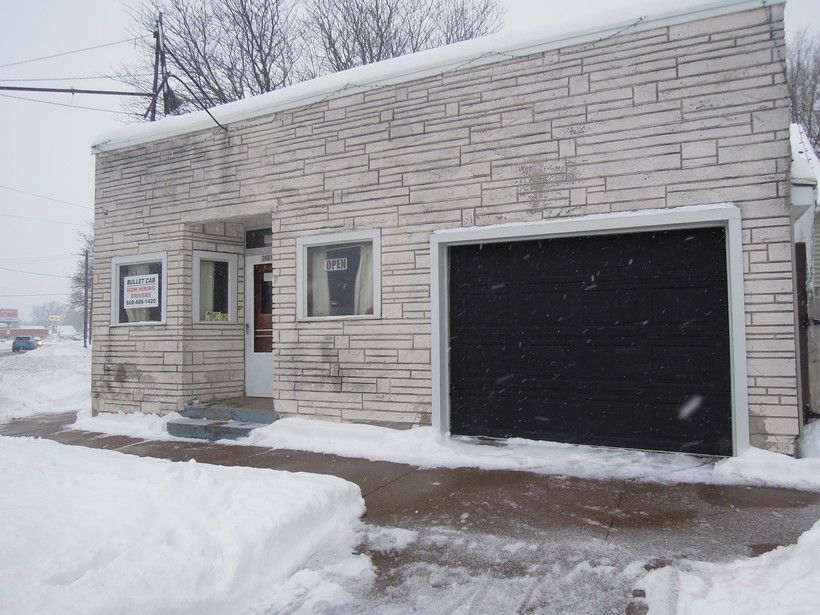 A racist and Islamaphobic slur was graffitied across a garage door of Bullet Cab in La Crosse sometime between the night of Tuesday, Feb. 5 and the morning of Wednesday, Feb. 6. The slur, and garage door, have since been painted over with black paint. Hope Kirwan/WPR

La Crosse Police say they will pursue enhanced penalties for the perpetrator of a hate crime against a local business.

A racist and Islamaphobic slur was graffitied across a garage door of Bullet Cab in La Crosse sometime between the night of Tuesday, Feb. 5 and the morning of Wednesday, Feb. 6. The graffiti read "Sand (N-word) Mike" and was directed at Bullet Cab’s owner, Mike Ahmad, who is Muslim.

"With that kind of hate in this town, it’s horrible. I really don’t even know what to think anymore," Devenport said.

La Crosse Police issued a statement condemning the crime, saying the department "will not tolerate hate crimes, racism or any other cowardly act meant to alienate a member of our community."

Police also asked the public to report any information they might have on the crime and that tips could be eligible for a cash reward.

Devenport said she's been pleased with the police department's response and she hopes investigators can find the perpetrator.

"Nobody should have to go through what Mike has been through. And Mike and Stacy (Ahmad) are the two most giving people I've ever worked for," Devenport said of Mike and his wife, Stacy.

An online fundraising campaign and community rally in support of Ahmad has been planned by the La Crosse Interfaith Shoulder to Shoulder Network, or LISSN, a community group working to end anti-Muslim sentiment and promote tolerance.

LISSN member Wale Elegbede said the group has been pleased that police and other local officials are approaching the matter with the proper severity.

"For me and our group, what was really important is the fact that these kind of hate crimes are going to be prosecuted to the fullest extent," Elegbede said. "The police department is giving people notice that, 'you need to knock it off or we’re going to prosecute you.' Because it's affecting our kids, it's affecting our community and it's not a game."

Community members have donated more than $1,300 to LISSN's GoFundMe campaign to cover repairs and install security cameras at Bullet Cab. Elegbede said the group will present the money during a rally at the business Friday morning.