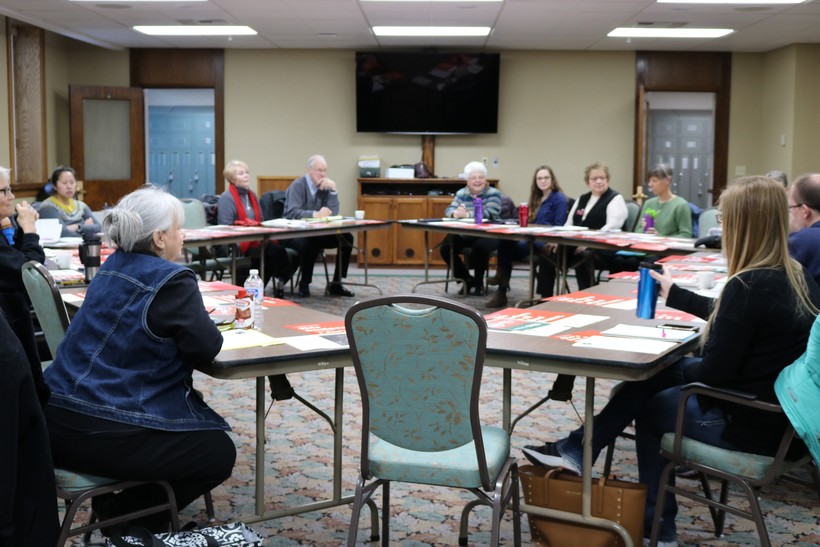 Members of the La Crosse Task Force to End Human Slavery meet this week at St. Rose convent in La Crosse. Photo courtesy of the Franciscan Sisters of Perpetual Adoration.

The NFL and an order of nuns in La Crosse are raising awareness of human trafficking in the upper Midwest.

The most common forms of human trafficking in the United States are prostitution and labor trafficking in industries like agriculture, said Sister Marlene Weisenbeck, the convener of the La Crosse Task Force to End Modern Slavery.

She said there are no firm statistics to point to with regard to the prevalence of human trafficking in the La Crosse area, but statistics from the National Human Trafficking Hotline show Wisconsin had 47 calls to the hotline for help with human trafficking cases in the first six months of 2017.

Human trafficking is thought to be a bigger problem in La Crosse than in many other parts of the state because of the area's close proximity to the interstate system, which is a common human trafficking route, said Weisenbeck.

Human trafficking isn't just being focused on at the local level. The issue of human traffic is getting a worldwide stage as part of Super Bowl LII.

As part of the Minnesota Super Bowl Host Committee, the Mayo Clinic, based in Rochester, chose human trafficking as an issue it wanted to draw attention to as part of pro football's biggest game of the year.

The affiliated Mayo Clinic Health System based in La Crosse is planning to work with health providers at its regional hospital and clinics to recognize victims of human trafficking in the La Crosse area, said Phillip Nielsen, who is a social worker at the La Crosse hospital.

"In Rochester, in the emergency room, they have an algorithm in which they ask a series of questions," he said. "We hope to be able to adapt that in our health systems across the region. Begin to educate our health care providers, what to ask. How to ask it in a way that recognizes that their patient may be traumatized."

The issue of human trafficking has also been the recent focus of attention by the Franciscan Sisters of Perpetual Adoration.

There are more than 50 members of the group from dozens or organizations from human service groups to law enforcement.

In January, which was Human Trafficking Awareness month, the FSPA produced a series of videos.

Weisenbeck said the videos feature the story of several victims and perpetrators of human trafficking in the upper Midwest.

"These interviews, anyone can learn about as close as we can get to the survivors about how they were brought into the life, what it was like and where they are now in their recovery process," Weisenbeck said.

Weisenbeck said the La Crosse Task Force to End Modern Slavery has been successful in educating people about human trafficking, but in order to do more than just raise awareness, the La Crosse area needs to find a way to collect better data about the problem in the region.