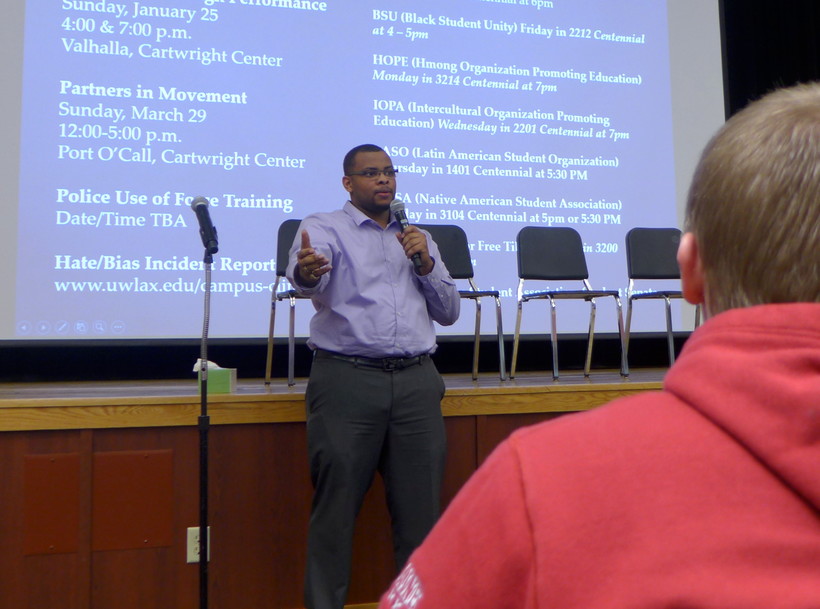 Shaundel Spivey talks with the hundreds of UWL students and staff that came to the open forum "Healing After Ferguson." Photo: Maureen McCollum/WPR News.

Conversations Are Held Both On UW-La Crosse Campus And In Broader Community
By Maureen McCollum
Share:

As anger over events in New York City, Ferguson, Missouri and elsewhere has poured into streets across the country, it has also led to some face-to-face conversations and deep soul-searching on racial matters in places like La Crosse.

University of Wisconsin-La Crosse recently held an open forum called “Healing After Ferguson” to talk about racial issues. As part of the program, a diverse group of people stepped up to a microphone to speak, some to defend police officers and others calling out inequalities on campus.

One of the attendees, A.J. Jackson said she thinks about race every day, and that she attended the forum because she needed a place to speak her mind and hear what her peers were thinking. The UW-La Crosse sophomore said she doesn’t always feel comfortable on a campus that, as of last fall, is 89 percent white. Conversations about race and Ferguson and grand juries have not been taking place in Jackson’s classrooms.

“I am a black woman, so these issues really do hit home for me in the community. They’re things I think about every day, things that really touch my heart,” said Jackson.

Jackson said it’s time to have tough, honest, and regular conversations about race on UWL’s campus. In UWL's 2013 Campus Climate survey, students and employees of color reported being more likely to experience discrimination and be bullied or intimidated. Jackson said the conversations are not going to be comfortable.

There’s a push to have events like the forum more frequently on campus. UWL officials also hope more people submit hate incident reports when they experience or witness discrimination, so the issue can be addressed by the school.

Efforts to start conversations on race are also happening beyond the campus borders, in the greater La Crosse community.

UWL graduate student Shaundel Spivey is behind some of those efforts. Spivey helped organize a protest in La Crosse after a grand jury decided not to indict white Ferguson police officer Darren Wilson for shooting the unarmed black teenager Michael Brown.

“Ferguson is the gasoline to ignite the fire that has been happening systematically with racism and oppression,” said Spivey.

Spivey has been working with the La Crosse Police Department to develop a relationship between officers, UWL students and communities of color.

“Whether we want it to or not, La Crosse is growing. There are a lot of black families here that were affected by that (grand jury) decision. We want to make sure that our police department is not operating in a biased way towards people of color,” he said.

Police Captain Robert Lawrence said he wants to build on those relationships too, especially with people who have negative perceptions of police. He said he became an officer to serve the community, not divide it. Earlier this semester, Lawrence sat on a panel about “knowing your rights.” Next semester, he'll teach a seminar aimed at educating the public about police use of force.

Lawrence said the process is not going to be easy.

“This ranks up there with solving world peace, because that’s really what it is — it’s about peace,” he said. “It’s about understanding. It’s about hatred and I think there are a lot of things to work on.”

Lawrence says he's proud to be part of that conversation.