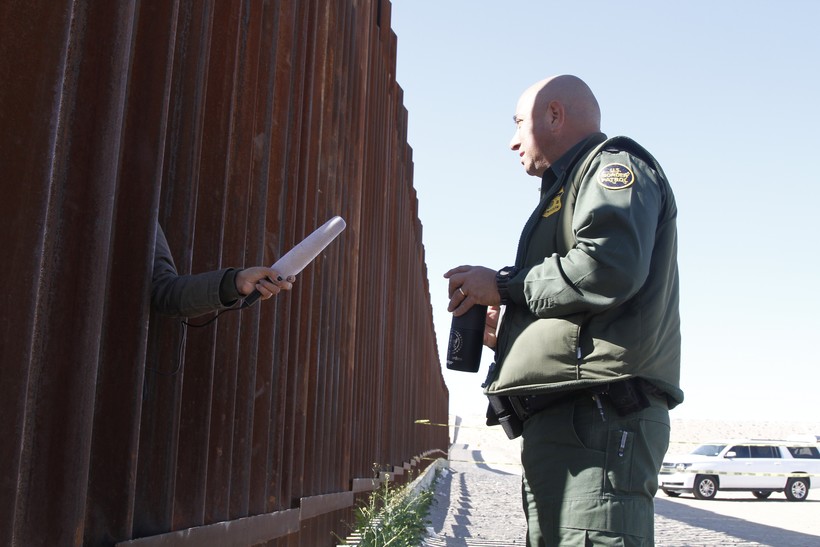 A journalist in Anapara, Mexico, sticks her microphone through a through a border fence to interview a Border Patrol agent following a training exercise on Friday, Jan. 31, 2020, in Sunland Park, New Mexico. Cedar Attanasio/AP Photo

2 Trips In The Past Year To Southern Border Inspired Effort
By John Davis
Share:

A group from the La Crosse area has returned from a trip to the U.S.-Mexico border hoping to encourage people to sponsor migrants seeking asylum.

Four women made the trip to Tuscon, Arizona in early February as part of a Franciscan Sisters of Perpetual Adoration (FSPA) effort to track what’s going on with migration at the country's southern border.

"Mostly it was to be of service," said Pat Ruda, justice coordinator for the FSPA. "Then also, to really learn more about what’s going on at the border and bring that information back to the sisters' community and our region."

This is the second contingent sponsored by FSPA to visit the border in the past year.

"We think we know what's going on, but until you actually travel to the border, we don't really know what’s going on at the border," Ruda said.

The group visited with migrants in shelters on both sides of the border, in Nogales, Mexico, where they are waiting to cross into the U.S., and at Casa Alitas, a shelter for migrants seeking asylum in Tuscon. They also met with border patrol agents to get a sense of the job they have.

Ruda said they learned in the most recent trip that its possible for Americans, including churches and other organizations, to be more welcoming to migrants seeking asylum.

"We really want to this year look at how to make our region a more welcoming community," she said. "It’s a lot easier to sponsor than I ever thought it was. You have to be a U.S. citizen, you have to show that you have means of support, but you can sign that paper and the U.S. government is pretty fine with that. There might be some other opportunities for people in our area if they have a heart and want to do this. We didn't know about that before."

The FSPA isn't the only La Crosse-area organization planning to help asylum seekers. Arlette Rodriguez-Miller, executive director of the Greater La Crosse Area Diversity Council and chair of the Coulee Region Immigration Task Force was also on the trip.

"We could possibly be helping families from India, Venezuela, Cuba, Central America, the Congo with help in their sponsorship. We want to make it a continuation of this trip and call awareness in the La Crosse area, so (people) know this is something we can do."