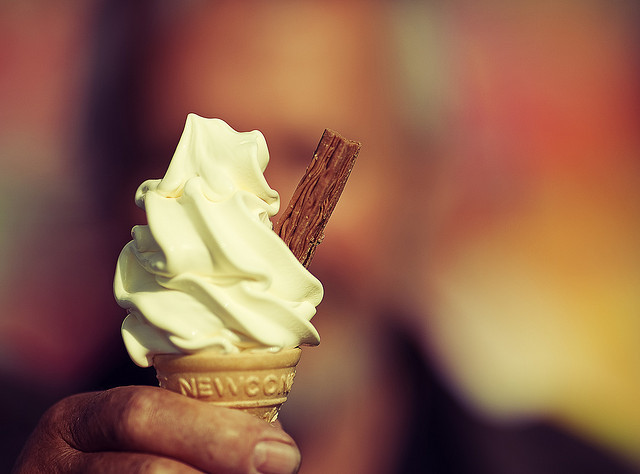 As the hot summer weather settles in, it’s no wonder that July is National Ice Cream Month  — and for anyone looking to celebrate with frozen treat, a pair of University of Wisconsin-Madison food scientists say there's plenty of variety out there to be enjoyed.

"There’s a lot of different properties within the microstructure that really pertain to the sensorial properties and why we like ice cream so much," said Maya Warren, a graduate student specializing in the physical properties of ice cream.

Warren, along with food science professor Scott Rankin, laid out some of the factors that separate one scoop from another.

"First you have your mix. That consists of your basic ingredients: so your cream, your milk, your sugar, your non-fat dry milk, stabilizers, emulsifiers, water," Warren said.

She explained that ice cream is churned to contain air, or "overrun," in order to create a better texture.

"One really important ingredient in ice cream is the air ... That has a lot of benefits to help make it scoopable, kind of fluffy on the palette. (That) can help it melt, and/or collapse," said Warren.

Scott Rankin explained that once egg yolks are added to the mixture, the properties of the ice cream change and custard is formed.

"Custard's a little bit (of a) different product. It’s intended to be consumed kind of at the soft-serve stage," said Rankin.

Egg yolks, he said, have a molecular structure that creates a version of ice cream with a higher oil content.

"In egg yolks are these particular molecules ... They're called phospholipids. And phospholipids act to interact between the milkfat and the serum, the water phase of a system. So, they allow a lot of oil to be whipped into a small amount of water," he said.

Although there is no legal definition in the United States for gelato, Warren said it's fairly easy to characterize.

"It tends to be definitely lower in fat than our traditional ice cream here. Gelato can range anywere from 2 percent fat to 7 percent fat. Gelato also tends to have a bit more sugar in it than your normal economy-brand ice cream, or your kind of higher-end ice creams that we have here in the U.S," she said. "And gelato also usually will have less overrun ... They’ll be a bit more dense."

Warren said sorbets are especially welcomed by people who have a lactose intolerance. She said they're generally made with "some kind of fruit source — raspberries, strawberries, watermelon," as well as a sugar concentration of 25 percent.

"You can freeze it, whip in air, and there you have your sorbet, which are very very good on hot summer days," said Warren.