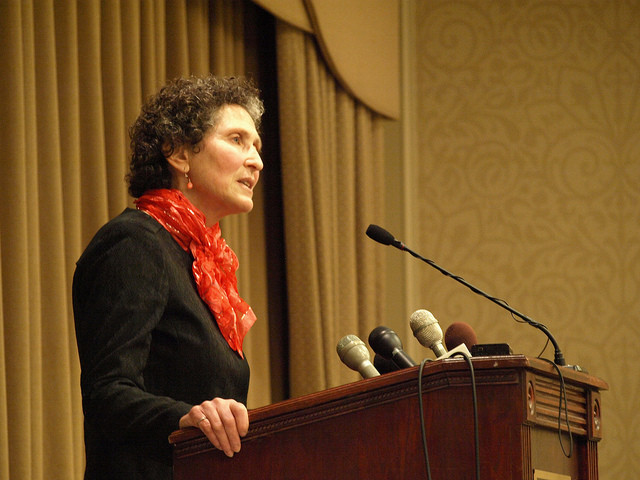 JoAnne Kloppenburg, shown above during her Supreme Court campaign in 2011.

Kloppenberg lost a tight race in 2011 against incumbent justice David Prosser by about 7,000 votes after a bitterly contested recount. The election took place during the contentious public debate over Gov. Scott Walker's plan to strip public employees of most of their union bargaining rights.

Kloppenberg will run again in next April's election for the seat held by Justice Patrick Crooks. Crooks is seen as a swing vote on the court who often sides with the two liberal justices, Ann Walsh Bradley and Shirley Abrahamson.

Crooks hasn't said whether he will run again. Last year, he said he was considering retiring at the end of his term, but this week he declined to comment on his plans.

In her emailed announcement, Kloppenburg said her top priority is preventing partisan political money from influencing the state's judicial system. Conservative and liberal groups together spent more than $3 million on TV ads in the 2011 race, breaking a record set in 2008 in the race between Michael Gableman and Louis Butler.

There was very little outside spending in the most recent court election. Incumbent Justice Ann Walsh Bradley raised and spent more than her challenger, Rock County Judge James Daley, and easily won re-election. Bradley campaigned on a slogan similar to the one Kloppenburg said she'll use, calling for an end to partisan political spending in judicial races

Milwaukee County Judge Joe Donald has said he plans to enter the race as well.

Editor's Note: This article was originally an Associated Press story. It has since been replaced with reporting by Wisconsin Public Radio.