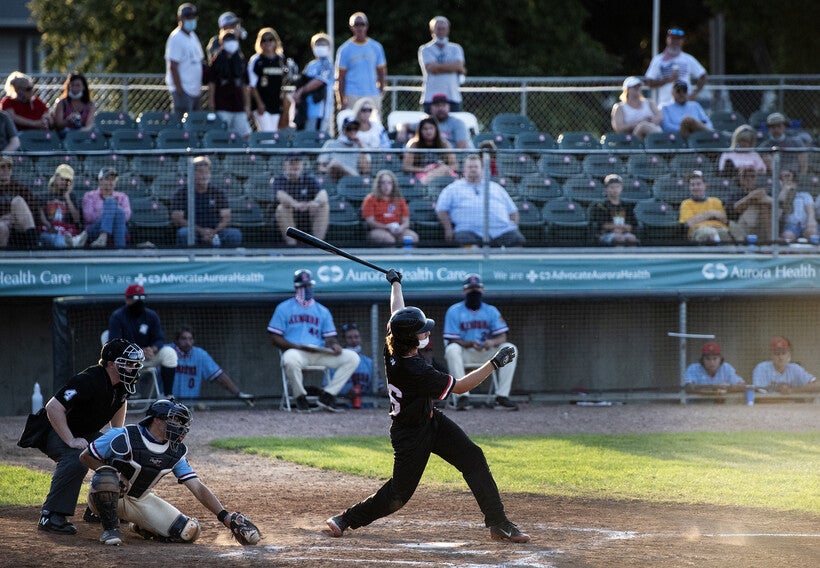 Jared Weber of the K-Town Bobbers is at bat Friday, Aug. 7, 2020, against the Kenosha Kingfish. Angela Major/WPR

Kenosha Baseball Bubble Brings Slice of 'Normal' Back To Summer

Players And Fans Say They're Just Happy To Be At Ballpark To Watch The Kenosha Kingfish And K-Town Bobbers
By Megan Hart
Share:

On a warm Sunday afternoon in early August, the Kenosha Kingfish took to Simmons Field for their 17th consecutive game against the K-Town Bobbers.

Fans donned masks as they waited in line for beer and hot dogs. Instead of a "kiss cam," the Jumbotron focused on socially distanced spectators.

Still, it felt like a normal summer day in Wisconsin amid a not-so-normal summer. Players and fans said they’re just happy to be at the ballpark.

Though the coronavirus pandemic has made a typical Northwoods League season impossible, the Kingfish have found a way to make baseball work. And thanks to the Bobbers, they haven't had to go far.

It's the inaugural season for the Bobbers, who were created to give the Kingfish a worthy opponent during the coronavirus pandemic.

The two teams are scheduled to face one another 26 times this summer.

Players Say There Was Lots Of Uncertainty This Spring

The Northwoods League is a summer league for college players. When college baseball season was canceled, Kingfish catcher Drew Dyer said he wasn't really sure what to expect. 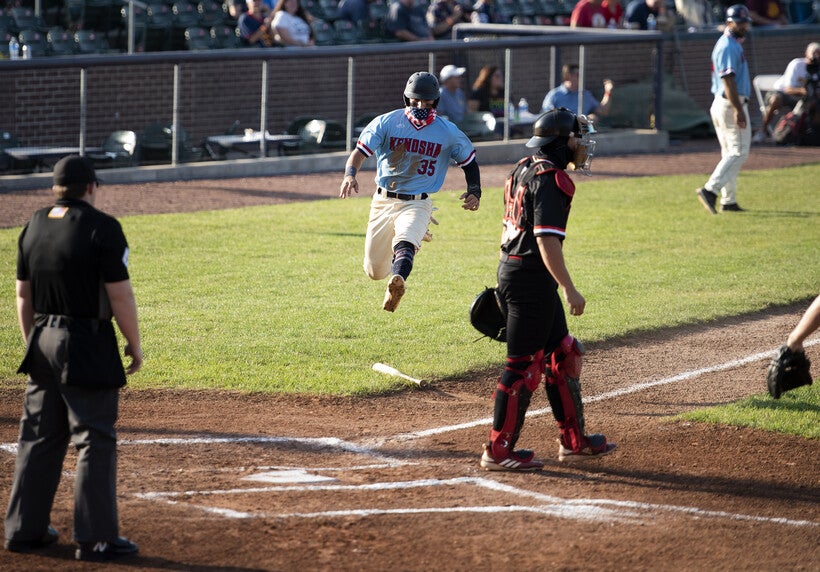 Kai Murphy with the Kenosha Kingfish scores a run in the first inning Friday, Aug. 7, 2020, during a game against the K-Town Bobbers. Angela Major/WPR

The Carthage College student signed a contract with the Kingfish before the pandemic put the season in jeopardy.

"It was kind of just a day-to-day, week-to-week thing, just looking for updates and hoping and still prepping to come out here, but you were never 100 percent sure," he said.

The league, which has teams across the Midwest, divided them by region to limit travel. The Wisconsin-Illinois region includes the Green Bay Booyah, Fond du Lac Dock Spiders and Wisconsin Woodchucks, among other teams.

The Kenosha region features just the Kingfish and the Bobbers.

The Bobbers are made up of players and coaches from other Northwoods League teams, like the Madison Mallards, that are sitting out this season out due to local coronavirus restrictions.

Dyer, who played for the Kingfish last year, said things are definitely different. There's no travel, players aren't allowed in the clubhouse and they have to get their temperatures checked. 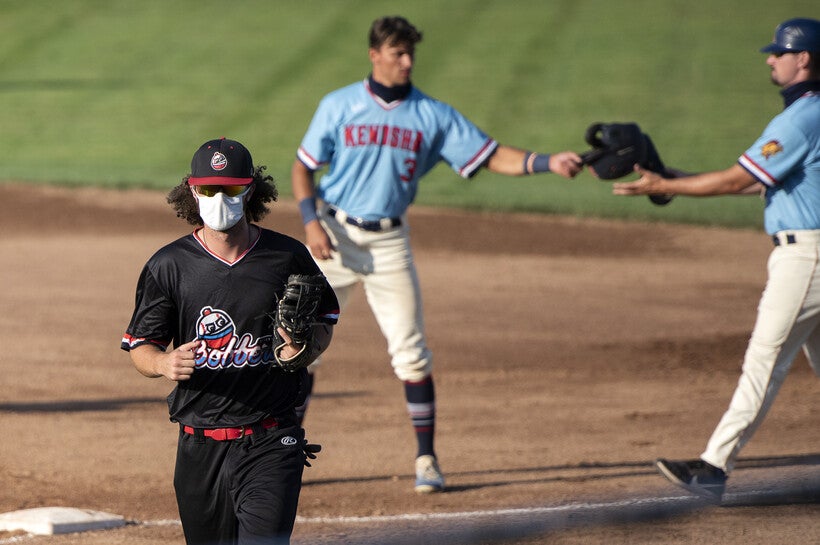 "Considering everything that’s gone on this year, it's amazing that we're playing ball, we're putting on a jersey every day," Dyer said.

He feels especially lucky to be playing in front of fans, he said.

"I think everyone is just grateful to get out on the field, honestly," he said. "You can kind of feel some normal back to your life when you're playing." 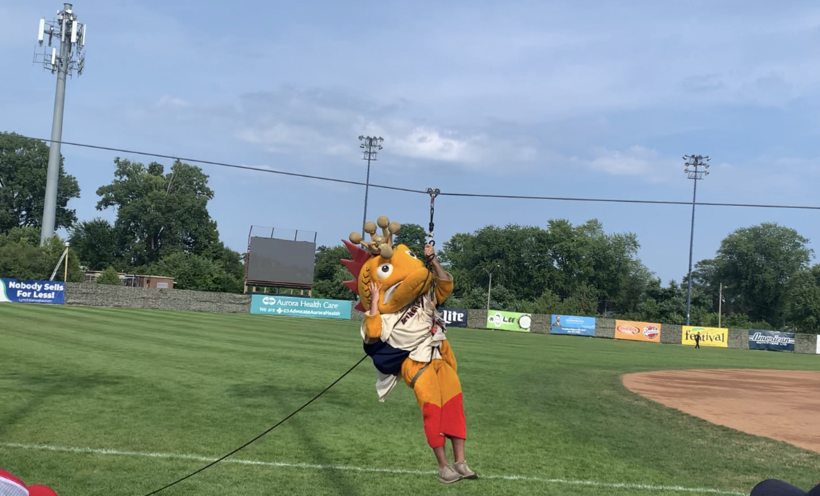 Elvis, the mascot for the Kenosha Kingfish, zip lines onto Simmons Field before a game against the K-Town Bobbers on Sunday, Aug. 9, 2019. Megan Hart/WPR

In a promotional video for this season, the Kingfish mascot — a fish named Elvis who zip lines onto the field before games — sees Bobby the Bobber as he's about to wash ashore in Kenosha. Bobby is a giant rubber fishing bobber.

"I know a fan came up with the name," Bigbie said. "A bobber is kind of a fish’s worst nightmare." 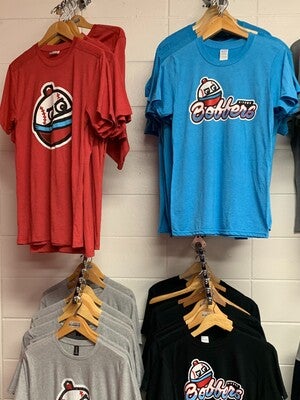 A manager at the team store said they sell plenty of K-Town Bobbers gear, though the crowd showed a strong preference for the Kenosha Kingfish. Megan Hart/Wisconsin Public Radio

With the iconic "Jaws" theme playing in the background, Elvis tries desperately to divert Bobby with a leaf blower, but it doesn't work. Thus, a rivalry is born.

A manager at the team store, which carries merchandise from both teams, said they're selling plenty of Bobbers gear this season. But the crowd still seems to favor the Kingfish.

There are some unique challenges that come with seeing one team so many times, Dyer said. You learn their strengths and weaknesses, and they learn yours.

"We get reports on all of them: what they throw, what their tendencies are," he said. "The hardest part is they kind of do the same thing to us, so they know how to pitch to us, how to hit our pitchers, so it kind of goes back and forth." 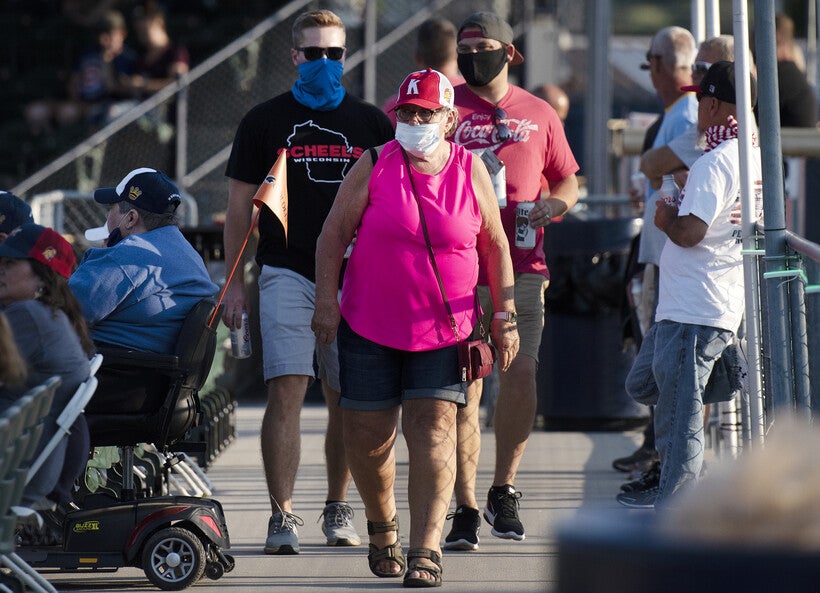 Fans wear masks as they walk around the stands Friday, Aug. 7, 2020, at a Kenosha Kingfish game. Angela Major/WPR

The Kingfish and the Bobbers both call Simmons Field home. The stadium is celebrating its 100th anniversary.

Its most famous tenant was perhaps the Kenosha Comets of the All-American Girls Professional Baseball League. The league was created by baseball executives like Phil Wrigley and Branch Rickey during another uncertain time in history.

It was designed to keep baseball thriving during World War II.

Bigbie and his teammates recently discussed how people will still be talking about the season in 20 years, he said.

"You can't really control everything that’s going on with the virus, but it's definitely really cool. I think everyone's enjoying it, everyone's loving it, being out here playing baseball," he said. 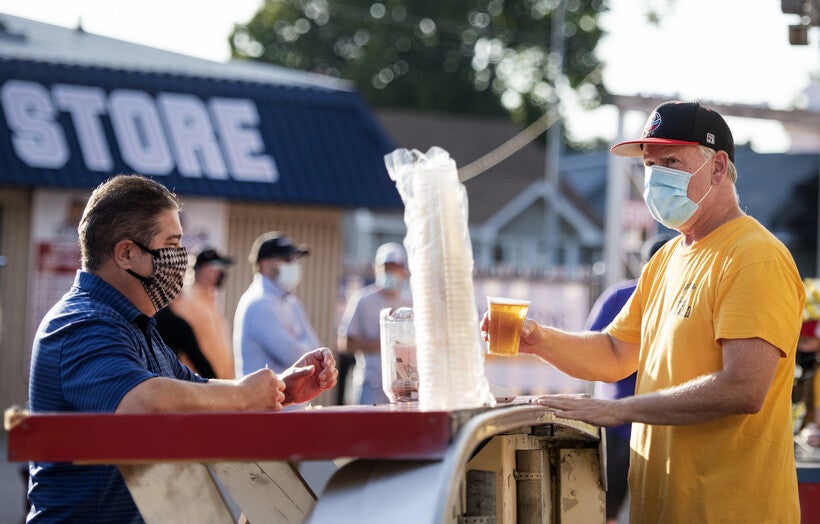 Karen Pedersen lives just across the Illinois border. On their first date, her parents went to see the Comets.

"My mom always told me she didn’t know anything about baseball, but she said she had to learn really, really quick," she said. "Now to have baseball back after this long hiatus, it's wonderful."

'Take Me Out To The Ball Game' 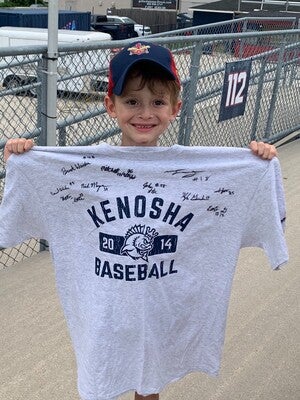 Larry and Terri Losch, from Pleasant Prairie, brought their grandson to the game. He caught a T-shirt and had it signed by the players. Megan Hart/Wisconsin Public Radio

Pedersen usually buys a ticket package for the Kingfish. She didn’t this year, unsure if she’d be able to get off work for enough of the games during the shortened season.

She was throwing out the first pitch, a bucket list experience. But she wasn’t excited to see the Bobbers.

Larry and Teri Losch, from Pleasant Prairie, brought their 8-year-old grandson, Justin, to the game. It was an eventful one.

The Kingfish had a two-run homer, a foul ball shattered a car window and Justin caught a T-shirt that the Kingfish players happily signed.

"It’s a good family experience here. It really is," he said.