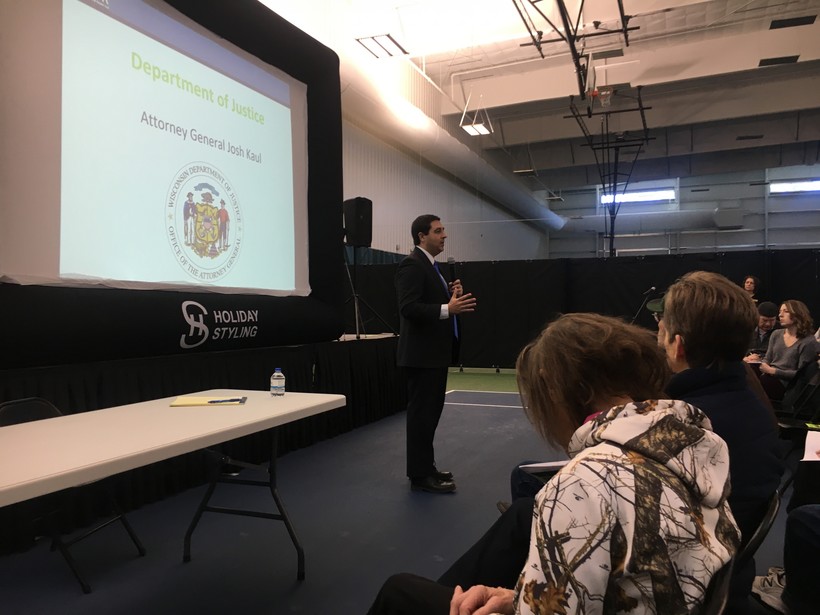 Wisconsin Attorney General Josh Kaul speaks at a listening session in Marinette on Dec. 18, 2019. He asked residents to tell him how they've been affected by PFAS contamination. Megan Hart/WPR

Many Residents Shared Personal Stories Of How They've Been Affected
By Megan Hart
Share:

Cindy Boyle grew up in Marinette in eastern Wisconsin. She and her husband worked hard and saved in order to buy their home on Lake Michigan in the Town of Peshtigo. They planned to pass it on to their children or put it toward retirement, Boyle said.

Now she, like many area residents, is wondering how much value her land has left due to PFAS contamination in Marinette and Peshtigo.

Boyle was one of the dozens of people who attended the first of two listening sessions Wednesday in Marinette hosted by Wisconsin Attorney General Josh Kaul and the state Department of Natural Resources. Kaul said he wanted to hear from residents about how they've been affected by the contamination. Many speakers shared personal stories.

Lisa Miller talked about how family members have faced health issues she believes are related to the chemicals. She moved to Marinette in 1984. She said she has noticed changes in the environment, too.

"Where we used to have an abundance of wildlife, the frogs have disappeared," she said. "The fish that used to swim in the area are gone. And in the last two years, we've noticed there are no ducklings anymore."

Miller has also lost two beagles to abdominal growths in the last several years, she said. She recently found out that a friend's Shih Tzu died of the same cause. She said she'd like to see studies done on the health affects of PFAS contamination in the area on both people and pets, a sentiment echoed by others who spoke at the meeting.

Andy Rich, another Marinette resident, said she has spent a lot of time researching PFAS and its effects on the environment. Right now, she said, the people of Marinette and Peshtigo have far more questions than answers.

Many community members became emotional as they shared their stories Wednesday afternoon. Some spoke about the high rate of cancers among their friends and family, which they think could be related to PFAS, while others talked about how the contamination has prevented them from fishing, hunting or farming on their land. The public comment portion lasted more than 90 minutes.

PFAS are chemicals found in a wide variety of products including the firefighting foam used at Tyco’s fire training facility in Marinette. They're considered "forever chemicals" because they don't break down in nature, said Christine Haag of the DNR. PFAS, or per-and polyfluorinated substances, are thought to be dangerous to human health.

Tyco is owned by Johnson Controls. The company is working with the DNR to address the contamination. Because of its extent, the DNR referred the case to the Department of Justice in June. Kaul brought several staff members to the meeting. He said it was important for them to hear from the residents who've been impacted.

"I don't think that anybody in the state of Wisconsin should have to worry about the safety of the water they're drinking," Kaul said.

The attorney general couldn't offer many details about the case because it's ongoing, but he thanked the speakers for sharing their stories.

Boyle, who is involved in two local advocacy groups, said it's encouraging that Kaul and DNR Secretary Preston Cole were in attendance at the meeting.

"Their presence validates that this is a dangerous situation," she said.

Representatives from Johnson Controls manned a table, answering questions before and after the meeting. John Perkins, vice president of environment, health and safety at Johnson Controls, said it was important for the company to hear from the public.

"We're committed to resolving the issue," he said. "Our No. 1 priority is to ensure that there is a clean, safe and reliable source of drinking water for the community."

This was the fourth of six listening sessions the DNR is hosting on this topic. Upcoming sessions will be held Jan. 15 and Feb. 19.