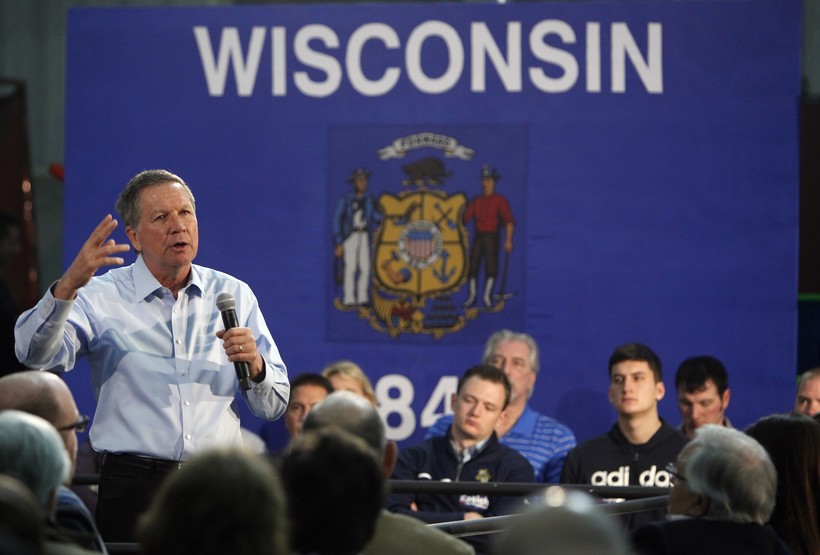 Kasich speaking at a campaign rally Tuesday in Waukesha.

Presidential Candidate Says He's Only Republican Who Can Win In November
By Kyla Calvert Mason
Share:

More than 100 Wisconsin voters turned out for a town hall with Republican presidential candidate John Kasich in Waukesha on Tuesday, where he laid out his strategy to win the nomination despite lagging in the polls.

The Ohio governor said he doesn't expect to win Wisconsin's primary next Tuesday. But he said he thinks he can gain enough delegates to be a contender at the Republican convention this summer.

If no one clinches the nomination through the primaries, Kasich told attendees that he believe he'll win over delegates who can switch candidates in later rounds of convention voting.

He said there are two reasons delegates will turn to him. First, he believes he can beat Democratic frontrunner Hillary Clinton in the fall.

"Nobody else consistently beats her. I beat her by 11 points in the last poll," Kasich said. "So, that's probably going to matter. Who is it that can win? Then, the second thing they're going to think about is ... who may actually be a good president?"

Kasich told attendees there have been 10 contested Republican conventions and delegates only nominated the presumed front runner at three of those conventions.

A digital display showing an ever-increasing national debt hung over the gathering. When one man asked Kasich what he would cut to balance the budget, Kasich replied he lives more in the world of reform than cutting.

"I would send welfare, job training, infrastructure, Medicaid and education out of Washington, back to the states. And then hold the states accountable for running those programs," he said.