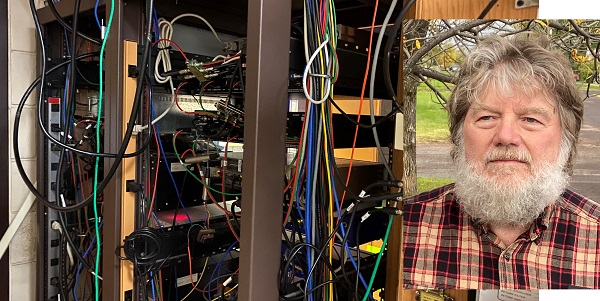 We continue our series of WPR Northern Bureau staff highlights with someone who brings more than five decades of broadcasting experience to his role as Chief Engineer. John Talcott began his broadcast career at WIGI 970 AM in 1966.  At just 14 years of age, his duties included vacuuming and light studio maintenance, and he learned how to keep a transmitter on the air with cardboard coils and glue. Over the next few years John studied on his own and first received his FCC Armature Radio License, then in 1970, his FCC Commercial broadcaster license, opening doors to Radio station Engineering. John was hired at WWJC, a 5000-watt daytime only station at 1270 AM.  There he learned industrial, mechanical and the electrical aspects of Broadcast Engineering.

In 1977 John switched to TV and was hired by KBJR working as a videographer and board operator. He joined the IBEW 242 Union at that time. He then worked at WDIO adding transmitter and studio maintenance to his skill set which he later put to use at KDLH for KDAL 610 AM.  Here John became shop steward and represented all engineers at the licensee.  In 1985 John was part of the team that was creating KDAL FM.  Once on the air, John designed and built two programmable automation systems that ran the radio station.  In 1991 John became Chief Engineer at KDLH TV, in that role he worked on state-of-the-art video recording and processing.

In 1996 the Radio stations were being separated from the TV operation.  John decided to go with the radio station and oversaw three FM stations and three AM stations (two of which had directional antennas). He was then tasked with finding a new facility to house the six stations and install Scott Studio automation. In 2001 new owners asked that he oversee the installation of another automation system call Maestro. In 2004 the company purchased six more stations and John oversaw the operations and equipment upgrades for now 12 stations.

In 2012 the technological changes in broadcast stream equipment became more computer based and some stations were putting more emphasis on the studio Information Technology (IT) systems than on the radio frequency transmitter engineering (RF). As this change was occurring, an opening was created for a broadcast and RF engineer at WPR. At the time John had worked 46 years in the industry, and never had to make a resume. He did and was hired by UWS to maintain the KUWS studios and transmitter.  John now has 54 years of Broadcast and studio Engineering, something WPR Northern Regional Manager Paul Damberg says is a valuable asset.  “I am in my 30th year of working in and around public radio,“ stated Damberg, “John’s background and extensive experience in various studio and transmission systems is an incredible knowledge base to be able to work with.  We are blessed to have a person with his talents and years of service running the stations of the Northern Region of WPR!”