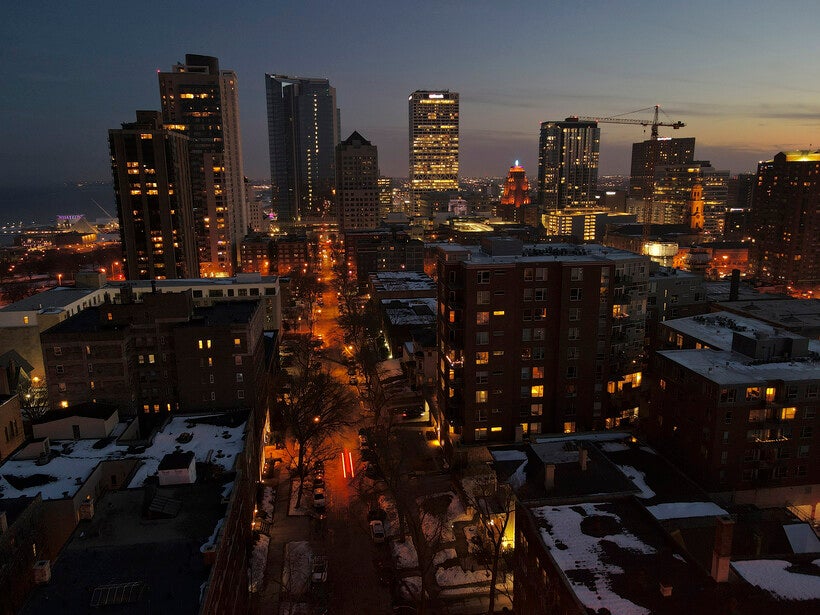 This image taken with a drone shows the Milwaukee skyline at sunset Saturday, Feb. 27, 2021, in Milwaukee. Morry Gash/AP Photos

Joel Brennan, who has been one of the top cabinet officials of the Evers administration, is stepping down to lead the Greater Milwaukee Committee.

Brennan’s last day as secretary of the Wisconsin Department of Administration is Monday, Jan. 17. He was appointed to the position in December 2018.

In a statement, Gov. Tony Evers thanked Brennan for being with him since the beginning of his administration.

"Especially over the last 19 months, the Department of Administration has been a critical partner in supporting our state and our economic recovery efforts, and I wish Secretary Brennan and his family all the best," Evers said.

In his new role, Brennan will lead the Greater Milwaukee Committee. The group has almost 200 of the top CEOs and leaders of business, industry, law firms and financial and educational institutions in the Milwaukee metro that are dedicated to improving the life and economy of southeastern Wisconsin.

"One of the things I’ve learned over the past three years is to have a bias toward taking action and doing whatever you can to move our community forward," Brennan said in a statement. "The GMC has a tremendous track record of accomplishment over its long history that provides a solid foundation to make an even greater impact on the challenges facing our community."

Prior to working in the Evers administration, Brennan served as president and CEO of Discovery World from October 2007 through January 2019. Brennan also served as head of Milwaukee’s Redevelopment Authority where he directed real estate development and large economic development projects, including the redevelopment of the Menomonee Valley and former Pabst Brewery site.

"Joel’s professional background will serve him well in connecting the dots to build on the work we’ve accomplished as an organization and take it to a new level focusing on the key issues that will improve our quality of life," said Greg Marcus, Greater Milwaukee Committee board chair and president and CEO of the Marcus Corporation, in a statement.

Evers is appointing Wisconsin Department of Financial Institutions Secretary Kathy Koltin Blumenfeld to serve as secretary of the DOA.

Koltin Blumenfeld was appointed by the governor to lead the DFI in December of 2018. She was confirmed by the Wisconsin state Senate in October 2019. Prior to her appointment to DFI, Koltin Blumenfeld was the executive vice president of special operations of Total Administration Services Corporation in Madison. She is a certified public accountant and a project management professional.

Evers is appointing DFI Deputy Secretary Cheryll Olson-Collins to succeed Koltin Blumenfeld as the secretary of DFI. Prior to serving as deputy secretary, Olson-Collins was the acting administrator of DFI’s Division of Banking, according to the governor's office.

Both Koltin Blumenfeld and Olson-Collins will take over their new roles on Jan. 17.