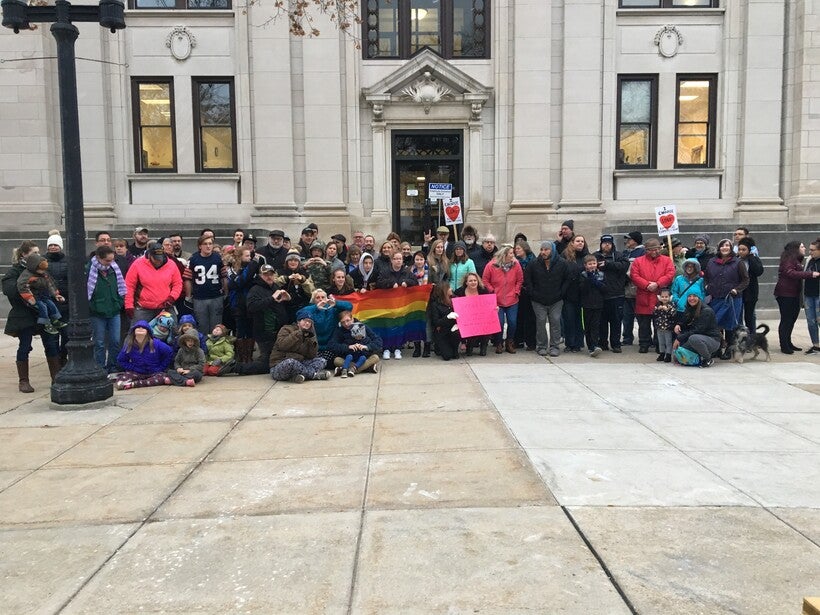 A group of about 70 people gathered outside a Baraboo courthouse Monday, Nov. 12, 2018, to denounce a viral photo of Baraboo High School boys giving the Nazi salute. Bridgit Bowden/WPR

A Jewish leader in Madison says the Baraboo School District's decision not to punish the more-than-60 students in a viral photo giving what appears to be a Nazi salute because of First Amendment protections sends the wrong message.

Jeff Spitzer Resnick, a civil rights lawyer who specializes in education law and school discipline and is president of the Shaarei Shamayim synagogue in Madison, said he disagrees with the district's response.

"My concern around throwing up a so-called 'First Amendment shield' around the Nazi salute is ... (it) is actually counter to the intention of educating not only students, but the rest of the public," said Resnick.

"What is the message being sent when the first statement that the district says around so-called discipline is the First Amendment protects this speech?" he continued.

If it was just in fact a wave, as the photographer has said, "then there is no need to even discussing the First Amendment, so it lends a lot more credence to the fact that it wasn't just a wave," Resnick said.

It also brings in a degree of hypocrisy, he added.

"There are school districts all around the state ... that routinely punished, for example, kids of color who flash gang signs. And how is this any different?" Resnick said.

To be clear, Resnick isn't advocating for punishing the children in the photo, he said, but rather questioning what kind of conversations and education should be happening now and should have happened prior to the incident.

It’s also important to put the event in a larger examination of white nationalism and Nazi symbolism, he said.

"It's important to put this in the context of a larger and very unfortunate movement in our country that's been emerging, particularly since the 2016 election, where safe space has been given by our president and many other politicians to white nationalism," Resnick said.

Resnick said he suspects many of the students didn't know what they were doing — with some having come out publicly saying so.

School districts should have a restorative justice program for incidents where harm has been done, whether it’s a crime or not, that addresses how you restore the situation for victims of that harm, Resnick said.

That comes from not only training and educating students, but also by training school staff so students have a consistent message, he said.

"I don't expect the Baraboo school, or frankly any school district, is going to fix this problem immediately," Resnick said. "But it does mean really ... training staff, using some of those professional education days to really make sure that they're on board with this type of education and that the students are receiving a pretty similar message."

Resnick also encourages all school districts to keep the history of the Holocaust alive.

"You don't have to go all the way to Auschwitz or even the Washington Holocaust Memorial to experience that kind of education," he said. "The Milwaukee Center for Holocaust Education will bring speakers to school districts and have them learn about what really happened at the time."

Since announcing it wouldn't punish the students in the photo on First Amendment grounds, the Baraboo School Board has adopted an anti-hate resolution that calls for inclusive learning environments, something Resnick calls a good step.