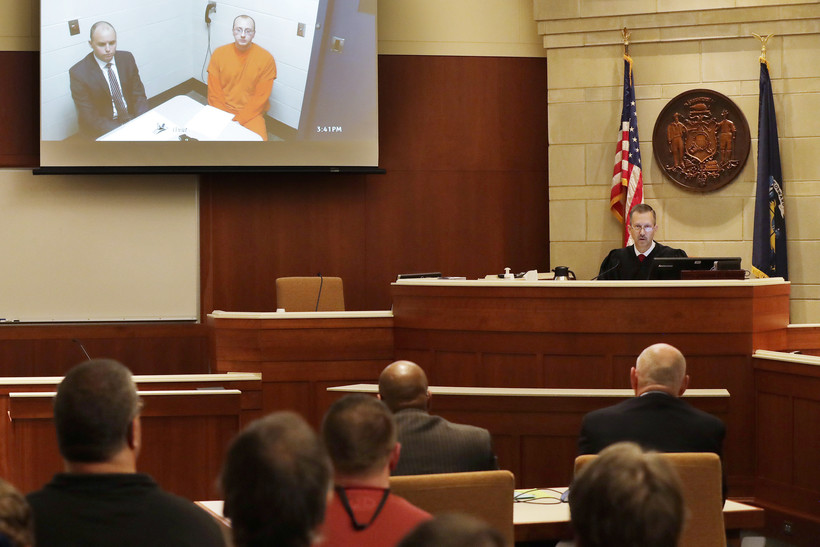 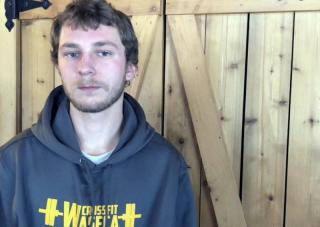 Those are two of the words that Barron County District Attorney Brian Wright used to describe Jayme Closs' escape last week from her alleged captor, Jake Thomas Patterson, after a court hearing on Monday where he formally charged Patterson with killing Jayme's parents and kidnapping her in October.

"Unbelievable," Wright said. "She's 13 years old. And if you read the criminal complaint, you can see the amount of control that he was exerting over her, and at some point, she found it within herself at 13 years old to say, 'I'm going to get myself out of this situation.' I think it's incredible."

Wright said that Jayme was lucky when she escaped.

"Everything had to fall into place that afternoon for it to have happened. Ten minutes either way, on either side … I just, it doesn't take much imagination to figure out what likely would have been the result," he said.

Patterson, 21, appeared via video conference in Barron County Circuit Court on Monday afternoon for the first time. Prosecutors formally charged him with two counts of first-degree intentional homicide, one count of kidnapping and one count of armed burglary.

A $5 million bail was set to keep Patterson from fleeing justice. Wright said he thought setting bail at that amount was necessary.

"All of this indicates the defendant is a flight risk, a danger to the public and he is unlikely to further return for further court proceedings without an exceedingly high cash bail," he said.

He also cited the steps that Patterson allegedly took to conceal his identity and prevent capture.

"He indicated that if he had been stopped by police, it was likely he was going to shoot at police officers with the three shotgun shells that he had remaining," Wright said. 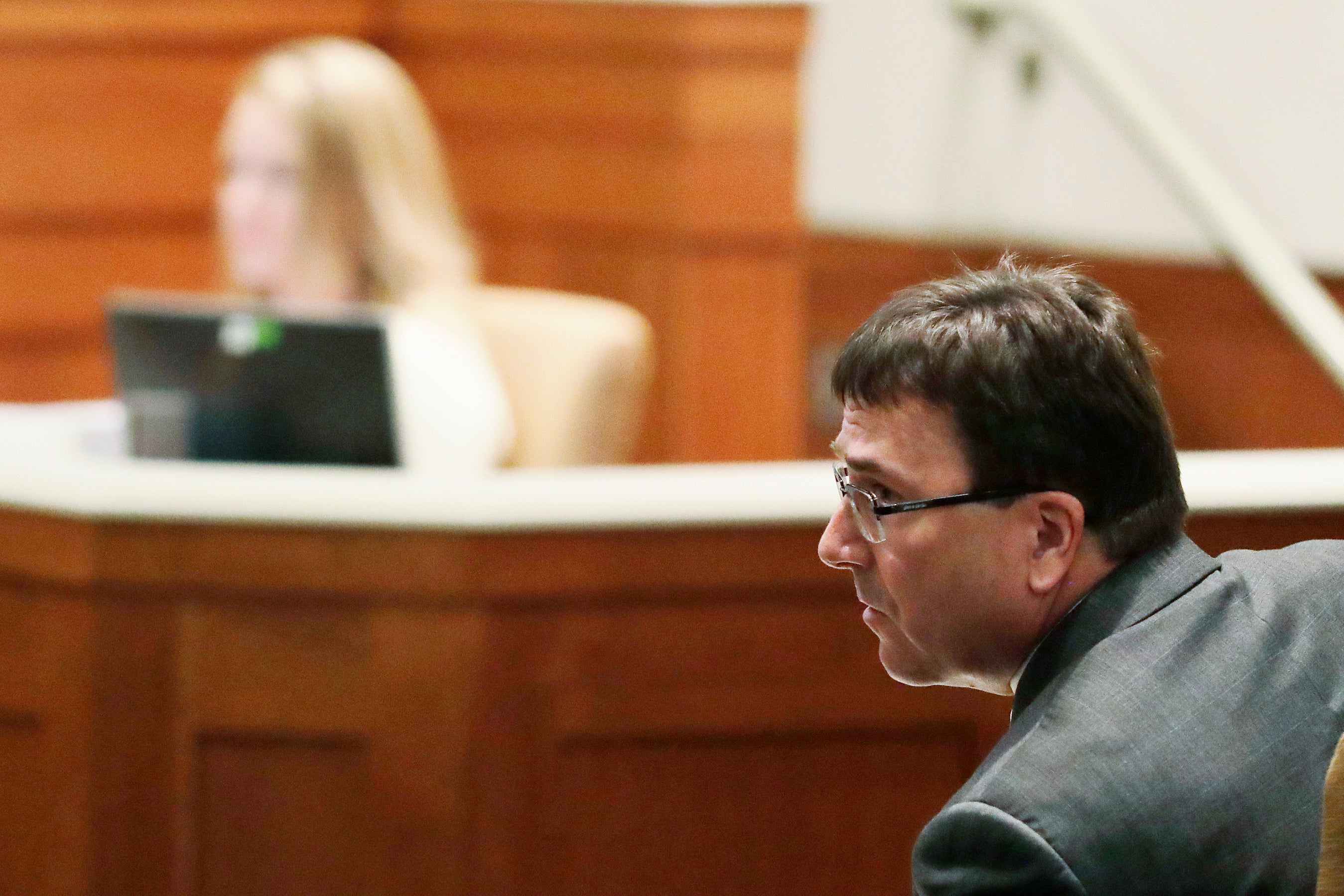 According to the criminal complaint filed Monday, Patterson apparently planned the crime methodically after he spotted Jayme getting onto a school bus.

The document said Patterson told investigators that he was driving to his job at a cheese factory one day near Almena when he stopped behind a school bus and watched Jayme get on. The complaint quotes Patterson as saying when he saw Jayme, "He knew that was the girl he was going to take."

Patterson didn't even know Jayme's name until he abducted her, authorities said.

Patterson went to the Closs home twice with the intent of taking Jayme but was unable to do so because too many people were around before he was able to kidnap her, according to the complaint.

Jayme told law enforcement that on the night the crimes took place, she awoke to the sound of her dog barking and while checking on her dog, she noticed someone driving up her family's driveway. Jayme went to her parents' bedroom and woke them up, according to the complaint. Her father went to the home's front door while Jayme and her mother hid in the bathroom tub. While in the bathroom, Jayme and her mother heard Patterson shoot and kill James Closs.

Jayme told investigators that her mother was calling 911 on a cell phone when Patterson broke down the bathroom door, told her mother to hang up the phone and then shot her to death before taping Jayme's hands and ankles. He then "dragged" her to his vehicle and threw her in the trunk, the complaint states.

According to the complaint, Patterson removed a safety cable used to open the trunk from the inside in the event a person becomes trapped.

Jayme told law enforcement that she had never seen Patterson before that night.

Patterson told investigators he used his father's 12-gauge Mossberg shotgun because the research he'd done showed it's commonly used, would cause the most harm and because he thought it would be more difficult to trace, according to the complaint. The document states he wiped shells and shotgun free of fingerprints and wore gloves to load the gun.

Patterson shaved his face and head and showered prior to the attack, was dressed all in black — including a facemask, hat and gloves — and took the license plates off his car, put stolen plates on and disconnected the dome and trunk lights, according to the complaint. 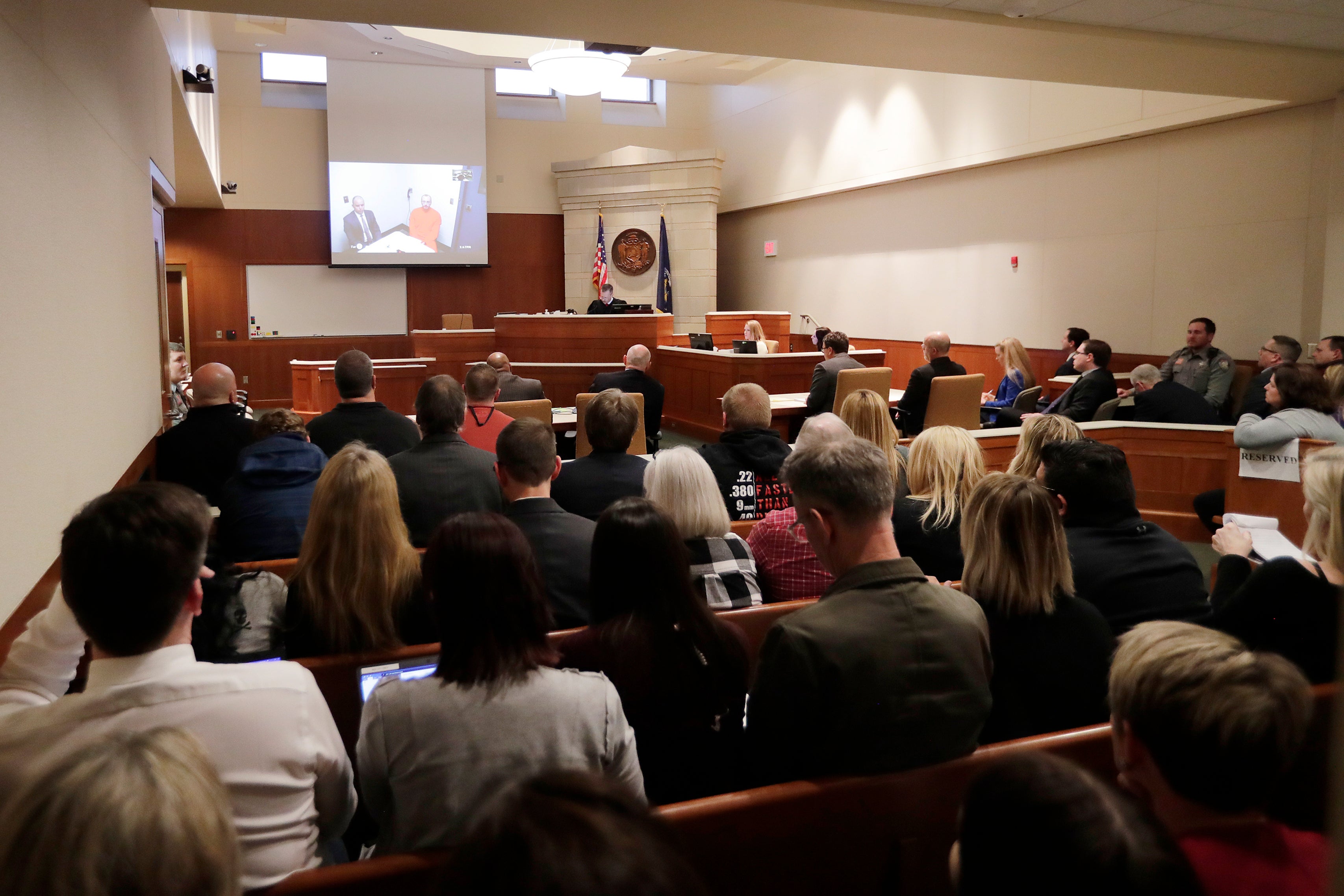 Patterson In Complaint: 'I Did It'

At the suspect's home in the Town of Gordon, Jayme said she was forced to hide under a bed in Patterson's bedroom for hours at a time when Patterson had company over or when he wasn't home. Patterson warned her that "bad things could happen to her" if anyone found her there.

When Jayme was forced to go under the bed, Patterson would stack totes, laundry bins and barbell weights around her so she couldn't move without him noticing. The complaint states Jayme was kept up to 12 hours at a time with no food, water or bathroom breaks.

On Thursday, the complaint states, Patterson told Jayme he'd be gone for up to six hours and made her hide under the bed. But this time, Jayme pushed the bins away, crawled out, put on a pair of Patterson's shoes and fled the house before approaching a woman walking her dog.

Shortly after Jayme escaped and in the custody of law enforcement, Patterson was stopped in his vehicle by a Douglas County Sheriff's Office sergeant and told the officer he knew what the traffic stop was about and said, "I did it." 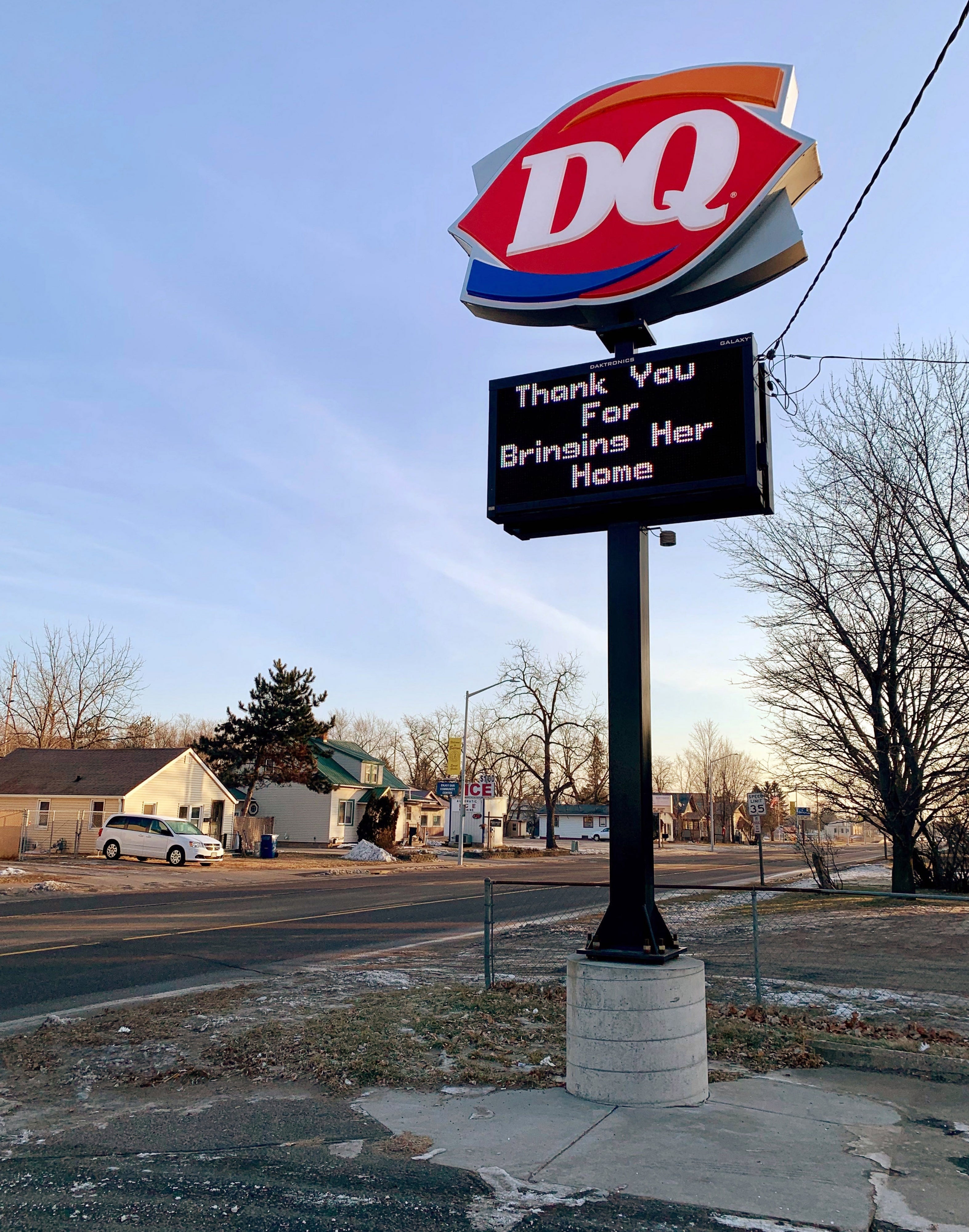 A thank you sign is displayed after Jayme Closs, a missing Wisconsin teenager was found alive more than three months after she disappeared, Friday, Jan. 11, 2019 in Barron, Wis. Jeff Baenen/AP Photo

Defense lawyers for Patterson say they believe he can get a fair trial, but they're not sure where. Public defenders Charles Glynn and Richard Jones said it's been an emotional time for the community of Barron, and they understand the pain the case has generated.

Photos of the cabin where Patterson is suspected of keeping Jayme show an unfinished ceiling, a three-car garage and an empty box of adult female diapers in the trash. Photos published by the New York Post show the cabin's living area, complete with a refrigerator, white kitchen cabinets and an old television. The ceiling isn't finished.

Exterior shots show a lean-to covering firewood, a three-car garage and an empty box of adult female diapers in a trash can. A sign over the front door reads "Pattersons Retreat."

Jayme's relatives said they aren't asking the girl to tell them what happened while she was held captive. Her aunts said they're surrounding Jayme with love and attention. 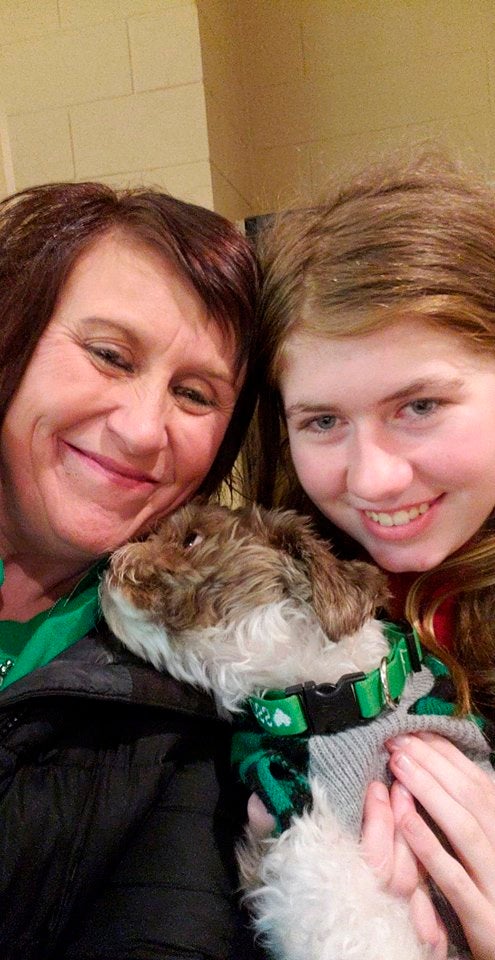 Lynn Closs and Sue Allard told "CBS This Morning" that they're telling their niece they're proud of her for surviving and escaping.

Lynn Closs said her niece's strength is incredible and that she took the power away from her captor.

Barron County Sheriff Chris Fitzgerald said Jayme had a smile on her face when he saw her Sunday.

It was the first time he had met Jayme since she escaped from her captor Thursday.

Fitzgerald called it "awesome" and a moment he'll never forget. He said Jayme showed him the room where she is staying with an aunt in Barron.

Suspect Discharged Early From US Marines

Patterson apparently washed out of the U.S. Marine Corps after little more than a month.

Patterson wrote in his high school yearbook that he planned to join the Marines after graduation. But military records show he lasted for only about five weeks before being prematurely discharged in October 2015 at the rank of private.

Marines spokeswoman Yvonne Carlock said by email that Patterson's early discharge indicated "the character of his service was incongruent with Marine Corps' expectations and standards."